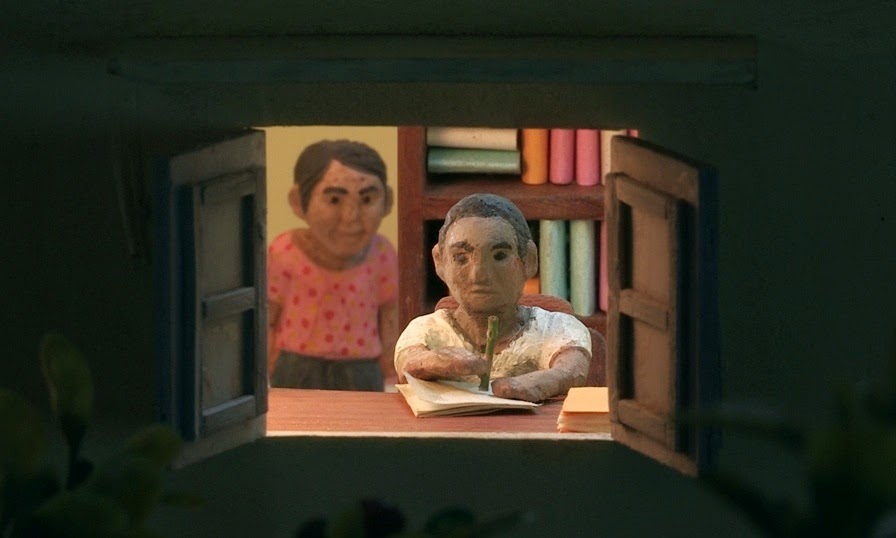 “An image cannot prove mass murder, but it gives us cause for thought, for meditation,” says director Rithy Panh as he narrates the ingenious documentary The Missing Picture. The Missing Picture screens in Ottawa this weekend at DiverCiné and if there's one must-see film of the festival, The Missing Picture is it. The Missing Picture, an Oscar nominee for Best Foreign Language Film at the 2013 Oscars following its win in the Un Certain Regard section at Cannes, is prompted by Panh’s search for a missing image from his childhood. He seeks a snapshot of his life taken in Cambodia during the Khmer Rouge regime and years of Pol Pot’s Democratic Kampuchea, which saw countless deaths. A single snapshot, as Panh’s meditation suggests hardly suffices for interrogating what happened in Cambodia between 1975 and 1979.


It’s with this philosophy that Panh explores—and ultimately challenges—history in cinematic form. Panh decides to tell the story of The Missing Picture—those lost years of Kampuchean turmoil—by constructing Cambodia out of small clay figures. The clay figures are impressively detailed pieces that are moulded and painted by hand, and Panh animates them to bring to life an historical narrative that challenges the record of the past. Seeing a picture, Panh says, often connotes ownership and belonging—think of the victims “caught” on film as they were framed within the Kampuchean lens—so his approach honours the victims by rejecting Pol Pot’s account. It’s also a striking addition to semantic arguments about the indexical power of the image, as the haunting photographs that appear throughout the film are records of the crimes of the Khmer Rouge, yet Panh ultimately rejects their authority to speak of the past and ultimately favours the absence of the image as a greater record of history fact. Hence the clay figures, which are malleable and physical stand-ins.

The clay figures are unsettling images. There’s a childlike, toyish whimsy to their construction, for the animated make-up of The Missing Picture, on one level, resembles The Lego Movie with a world cinema temperance. Clay figures play on trains on the archival backdrop. They sow the fields; they suffer; and they wither with starvation. The playful music draws out the visual horror of the film, as the increasingly emaciated clay figures of The Missing Picture accentuate the suffering of the victims through a striking contrast of sound and image.

The juxtaposition between the figures and the stories they tell, however, makes The Missing Picture doubly troubling. Panh’s evocation of lost childhood within the greater culture genocide makes this clay rendering of his toy box world a warped setting that defies comprehension. The genocide of the clay figures feels like a boy playing with toys, controlling them at his command to fit his ideal vision. (Ergo, Pol Pot is just Will Ferrell in The Lego Movie.) While reimagining is chapter of history, The Missing Picture also undercuts the authority of the dictator who wrote the first draft.

There is a shrewdly subversive motivation that underlies Panh’s game with the clay figures. The atrocities of Khmer Rouge, Panh notes, served the creation of “a model society.” Panh surely makes this rendering of Cambodia a model society with his tongue-in-cheek artistic stroke, but his clay version defies the ideology by exposing its corruption.

The Missing Picture reconstructs and represents history in the vein of Joshua Oppenheimer’s The Act of Killing, which tasked Indonesian mass murderers to dramatize acts of genocide, as it uses the artistic interpretation of history to interrogate and mediate upon the truthfulness of the image. The absence of the pictures delivers strong emotional and intellectual chords for The Missing Picture, as the missing pictures—missing both due to historical fact and artistic choice—underscores the loss of the subjects of those photographs Panh seeks. To recreate so many of his neighbours out of the earth into which their bodies decomposed, Panh resurrects them symbolically as he narrates an account of the suffering they endured during those years. The Missing Picture exceeds The Act of Killing in this regard, for Panh privileges the victims’ stories, rather than those of the murders. Both films are inspired with how they capture the subjectivity of truth, but The Missing Picture is especially unsettling as the idiosyncratic form consistently accentuates the loss of which the film speaks. It’s a haunting feat.

The Missing Picture screens during DiverCiné on Saturday, March 15 at 7:00 pm at ByTowne Cinema.