People of a Feather 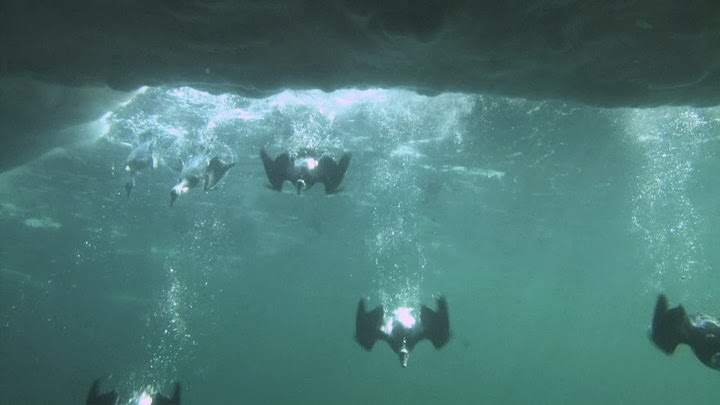 Ducks. They might not sound like the most interesting subject for a feature film. Perhaps ducks could fuel a foodie flick, since rich, fatty duck meat is one of the most delicious things on the planet. BBQ duck, Peking duck, and duck à l’orange are all reasons to cry, “Om nom nom nom!” What happens, though, when the ducks disappear?


This question acts as a startling motivator for Joel Heath’s impressive documentary People of a Feather. Heath joins members of the Inuit community on the Belcher Islands in the Hudson Bay to study the patterns and life struggles of the local eider ducks. Funny and frumpy little birds, the eider ducks are, but their down offers the warmest feather in the world. This down has been a source of wealth for the local community, as the refined design of the down makes for a warm and sturdy coat.

The ducks, however, are dwindling because large hydroelectric dams have been installed to generated power for southern Canada, New York, and eastern North America. These new dams are changing the water currents, which in turn alters the ice flow and makes it hard for the ducks to survive.

Heath captures the ducks in their natural habitat using some truly stunning underwater cinematography. Watching the ducks dive and gulp up conches is a spectacular visual feat, not to mention a sight that is surprisingly evocative. Patient observations of the ducks show them losing a struggle against the manipulations of their ecosystems, as one particularly powerful scene sees one duck fight for its life as it tries to escape the fast moving water, break through the ice, and come up for air. It doesn’t, and Heath captures it as another victim trapped beneath the ice.

The ducks aren’t the only ones affected by the changes. People of a Feather extrapolates the plight of the ducks into wider questions of community action. The Inuit and the ducks are people of a feather, for the film contrasts the community’s adaptation to the changing environment with dramatic recreations depicting how the inhabitants of the island lived a century ago. The film looks to the past to make sense of the present, as the episodes show the community working together and, in turn, becoming caretakers of the ducks as they break the ice to keep the ducks alive, for the loss of the ducks carries great implications for the people’s own welfare.

People of a Feather makes an intuitive feat of using one ecological trouble as a microcosm for greater environmental concern. The film, however, is often far too meandering to deliver the point with persuasive power. Beautiful nature scenery and time lapse photography allow one to appreciate the changing landscape and the threat that global warming poses for ducks and people alike, but add to these sequences extensive hunting scenes, random interludes of young people rapping, and the effective if redundant dramatic episodes, and the point is muted. The ducks are powerful enough, but People of a Feather rambles and quacks a bit too much.

The film also omits the obvious point that the Inuit themselves are part of the culture that contributes to global warming. Fuel and electricity consumption make demands for the dam, yet Heath never asks the community why they have adapted to conveniences of modern living—i.e. they use gas-powered snowmobiles/ all-terrain buggies and electronic conveniences like stoves, televisions, and iPods—instead of favouring the traditional ways that are more sustainable. The hunting episodes do illustrate the resourcefulness of the people, especially when they catch a seal and quickly dismember it into useful bits, the dramatic episodes, on the other hand, make the absence of resistance a logical gap in the film and therefore offer little more than tangential nostalgia. People of a Feather looks to the past, but it doesn’t actively use it to interrogate the present. It asks questions for rhetorical purposes, but it doesn’t look for answers.

People of a Feather does make clear, though, that a technology as simple as a downy feather should inspire humans to forge innovative ways to fuel their newfangled ways and keep the ducks quacking. The visual power of the film offers a necessary call to action. If we do nothing, then we’re just a flock of sitting ducks.

People of a Feather is now available to rent or buy on Vimeo on Demand.