LAFF Review: 'In the Name of the Girl' 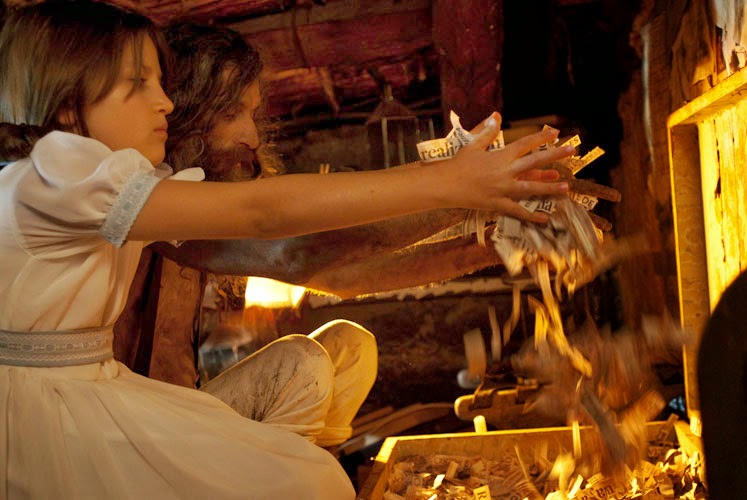 The future looks bright according to In the Name of the Girl (En el nombre de la hija). Girl, which screens in Ottawa on Friday as part of the ongoing Latin American Film Festival, offers a tale of tomorrow's leaders with its sweet story about a young girl empowered by a critical mind. Girl is really a take on today's leaders, for the film takes place in a fateful summer of 1976 Ecuador and looks to the future. The film, like the festival's recent screening of Habanaststion, foresees a world in which kids learn from the mistakes of past generations and work together to make a better tomorrow.

In the Name of the Girl and Habanastation go hand in hand with their propaganda-infused playtime, but neither film should really be called a kids' movie, for that might diminish their charms. Every good  fable or bedtime story requires a morale over which the kids may mull when they go to bed, and Girl appropriately leaves moviegoers wondering why systems exists to keep people on different plains.

Manuela, played by Eva Mayu Mecham Benavides, is the strong-willed girl who becomes a young leader in the film. The twelve-year-old Manuela experiences an eye-opening glimpse of Ecuador's bougie upper crust when her parents leave her and her brother, Camilo (played (Eva Mayu Mecham Benavides’ offscreen brother Markus) at their grandmother's ranch for the summer while they go off on some top-secret mission in the jungle. (More on that later.) Juana Estrella plays Grandma Lola with likable curmudgeonliness, but summer on Grandma Lola's ranch is hardly a siesta, for Manuela confronts a little microcosm of social stratification when she discovers that granny openly allows, if not encourages, her grandchildren to shun and belittle the servant's son who helps at the ranch.

The boy, played by Paul Curillo, is named Andres, but the cousins call him Pepe since Manuela’s cousin Andres (Sebastián Hormachea) gets first dibs to the name and he doesn't want another Andres cramping his style at the ranch. The kids also call Pepe 'the louse' (as does Grandma Lola) because they think he had a dirty face. Class and racial divides are rampant on the ranch, and bigoted Grandma Lola preps her grandkids to grow up with backwards morals.

Grandma Lola also happens to be God-fearing Bible Thumper, which clashes greatly with Manuela's avowed atheism. Manuela questions Grandma Lola's preaching and she plays the role of the inquisitive philosopher when the other kids—mainly Manuela’s tattle-tale cousin Maria Paz (Martina León)—go through the contradictory motions of shunning Pepe yet gabbing on about love and forgiveness. The summertime adventure gets another spin when the kids discover that their grandparents keep their mentally ill son locked in a lab and send Pepe to feed him scraps as one does a dungeon baby in cartoons. The family is full of double standards and secrets, and each one offers Manuela a step towards becoming a headstrong and outspoken leader of tomorrow.

In the Name of the Girl is a subtle, natural, and realistic film driven by plot, character, and substance. Director Tania Hermida displays a natural hand at minimal aesthetics and she boldly relies on her cast of very young actors to carry the film. She mostly succeeds, as the kids bring a playful innocence to the roles. It feels as if none of them, even Manuela, truly grasps the gravity of the words they speak. Nor should they, really, because pre-adolescent kids shouldn't be worrying about being the next Che Guevara when they could be having fun.

Hermida, however, makes clear that the power of Manuela’s intuitiveness—the girl is wise beyond her years—has an unmistakable socialist undertone. Snoopy Maria Paz, for example, finds a treasured picture that Manuela keeps at her bedside table. It’s of Che and his peers helping the masses. Manuela even gets a bit of socialism in her blood when bratty Andres finds a newspaper clipping that reveals what Manuela’s parents are actually doing: They’re—gasp!—in Bogota learning about heart surgery so they may improve medical care when they return home. All this information pits Manuela as a foil for her old guard grandparents.

In the Name of the Girl uses the pleasant youthfulness of the production to challenge some longstanding ideals. These social constructions and divides of class seem rather pitiless if even a child can recognize their artifice and emptiness. It’s a point that could not be made with mature actors, yet Hermida’s choice to let the power of the film hinge on making her actors both characters and symbols grants In the Name of the Girl its progressive authority.
Hermida then does something surprising with the political thread of In the Name of the Girl. She challenges it. This challenge appears towards the end of the film when Manuela decides to lead her cousins on a hungry strike to protest their grandparents’ actions. The kids stop eating; they make signs; and they act like little rebels. Nobody is there to listen, though, as Pepe’s mother observes while the snacks she prepared go to waste. All Manuela’s forward-thinking therefore seems pitiless if the people in power are at such a remove from their underlings that communication and debate seem moot. There’s a tangible spirit of hope that leaves the ranch, though, when summer ends. In the Name of the Girl is a pleasantly subtle story about one generation’s ability to reshape the world, and part of its accurate realism is utter difficulty of changing old ways.

In the Name of the Girl screens in Ottawa at the Latin American Film Festival on Friday, April 11 at 7:00 pm at Library and Archives Canada.
Update: Girl screens again on June 7 at 7:00 pm as part of the Ecuador Film Series.

What did you think of In the Name of the Girl?