The Rising Star & The Veteran 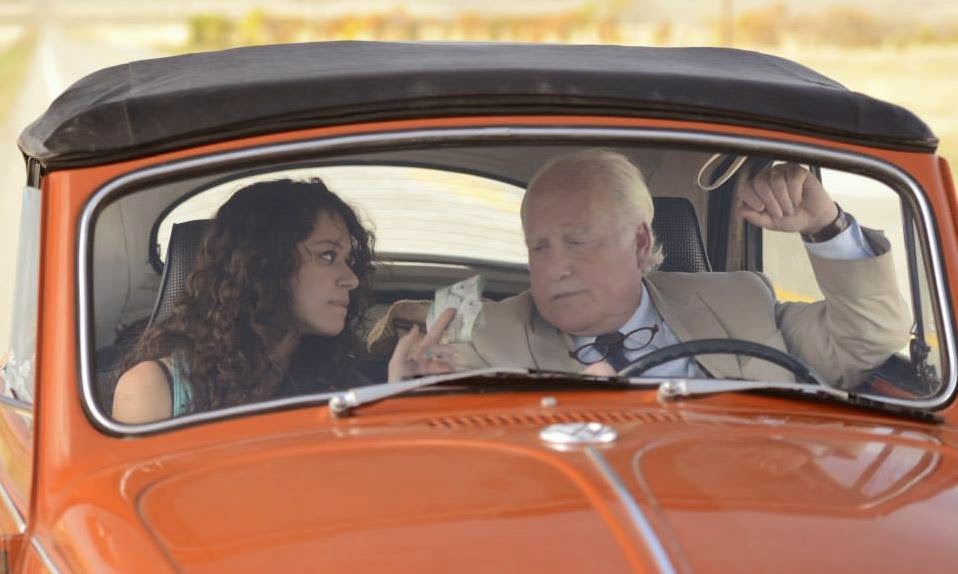 Tatiana Maslany is quickly becoming Canada’s rising star. Maslany, who is everywhere on film and television nowadays and was recently a Screenie nominee her performance in Cas & Dylan, is an actress of impeccable range. Her larger-than-life turn as the free-spirited Dylan makes for an amiable odd couple with the stuffy Cas Pepper played by Richard Dreyfuss. The pairing of the rising star and the veteran actor lets Cas & Dylan rise above road trip familiarity.

There isn’t much new here, but the actors keep it afloat. Cas, a doctor, has an inoperable brain tumour and heads west to end his life somewhere more exciting and picturesque than Winnipeg. Dylan, meanwhile, is on the lam from her crazy boyfriend. The two hit the road Thelma and Louise style when Dr. Pepper steamrolls Dylan’s boyfriend and Dylan convinces him to stick together to sidestep vehicular manslaughter charges.

The convoluted premise is somewhat farfetched. Why Dylan, so close to death, would spend his final hours with such an exasperating bohemian is hard to believe. Dylan is loud, discombobulated, flighty, and needy, so she seems like the last piece of baggage Cas needs for his final trip.

Screenwriter Jessie Gabe, however, adds a nice subplot that ties together both characters’ insecurities. Dylan, an aspiring writer, lacks the life experience to make compelling prose, while Cas struggles to complete his suicide letter (or “legacy note” as he prefers to call it in the age of “conscious uncoupling” and such). The two misfits reconcile their flaws in a feat of co-authorship by drawing on the milestones of one party and using the eclecticism of the other. The thread gives Cas & Dylan a touching endnote that makes the trip worthwhile.

Jason Priestley makes a respectable directorial debut by relying on his two leads. (Cameos by Jayne Eastwood and Aaron Poole also add some fun.) The indie soundtrack and the picturesque prairies give Cas some charm in the a/v department, but it’s really the acting that makes the film work. Maslany reveals more of her comedic side and sells the final emotional turn of the film with conviction. Dreyfuss, on the other hand, is fun and cranky. The film couldn’t find a better pair of actors to revive the old pairing of the sugar daddy and the young free spirit. One can enjoy Cas & Dylan if one simply goes along for the ride.

Cas & Dylan is currently playing in Toronto at the Cineplex Varsity and Varsity VIP.
It opens in Ottawa at The ByTowne on May 9 and screens at The Mayfair May 16-22.


What did you think of Cas & Dylan?