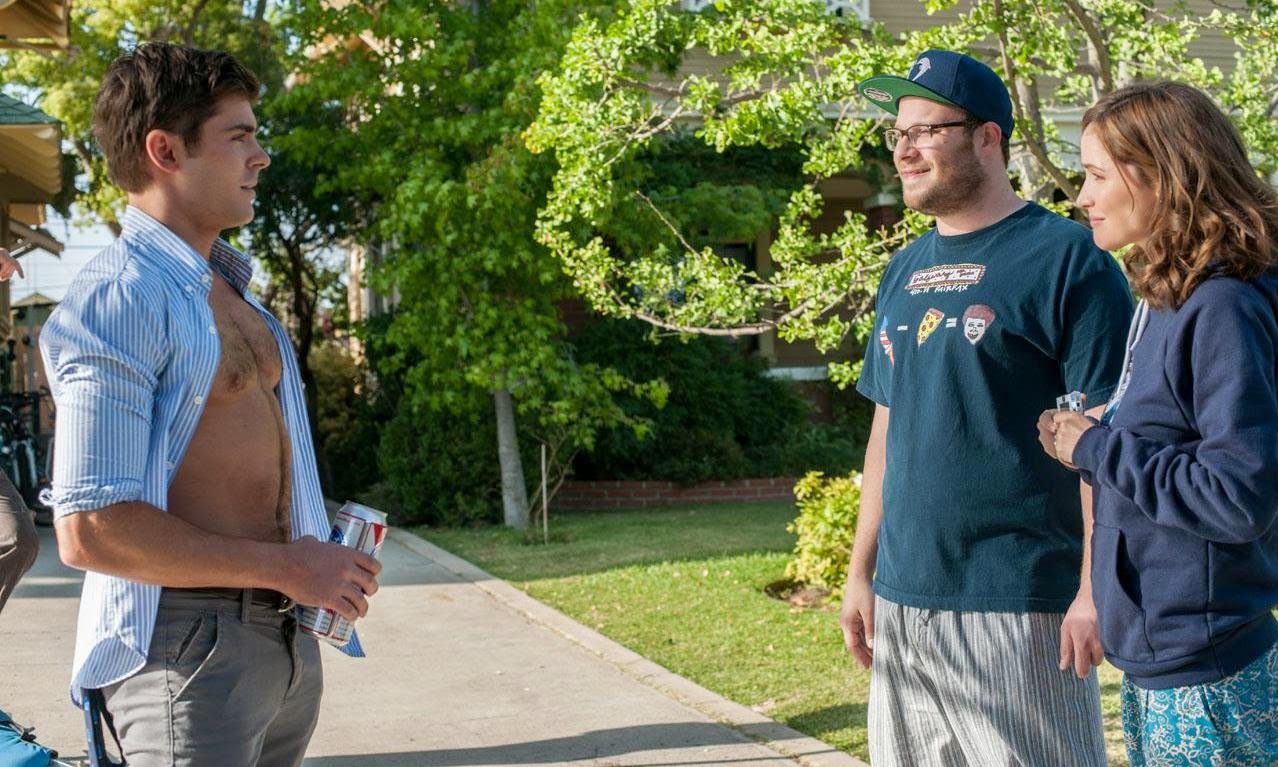 Meet Mac and Kelly Radner. They’re a happy couple enjoying life in the ’burbs with a baby. Spontaneous sex is finally creeping back into their marriage, so life with little Stella seems perfect… until a fraternity buys the house next door.

Seth Rogen and Rose Byrne star as the (un)happy couple while Zac Efron plays Teddy, the pretty boy president of the neighbouring fraternity. Neighbors has unexpected casting with Seth Rogen as the uptight NIMBY, Ellen Parsons as the funny mommy, and Zac “High School Musical” Efron as the randy frat boy, but it works with the three leads breaking their molds in this R-rated turf war. Byrne is especially funny—she steals the “old couple” thread of the film right from under Rogen—and goes for broke with the raunchy jokes after winning laughs playing the straight-laced foil in Bridesmaids. Moms can be just as fun, nasty, and sex as the sorority sisters partying it up next door.

When Neighbors is funny, it’s really funny, but only half the jokes hit the mark. (And many of the gags that are on target appear in a fun cameo with Lisa Kudrow.) Director Nicholas Stoller drags the gag on far too long—much like he did in the unending saga of The Five-Year Engagement—and the tomfoolery struggles to sustain ninety-minutes of diversion.

The parents are a lot more entertaining than the partiers are, though, so Neighbors delivers an uneven and sporadically funny hour-and-a-half of boisterous shenanigans. The interplay between Rogen and Byrne sees Neighbors at its funniest with jokes about brunch and breast pumps; the frat house, alternatively, offers a mixed bag of Porky’s suburban humour and an awkward brodown of weirdly homoerotic monkey business. The silliness of the parents’ role in the suburban war actually has a point, for Mac and Kelly rediscover the thrill of spontaneity in their relationship and gradually accept the defeat of their youth after one too many nights of mix magic mushrooms and baby monitors. The stakes aren’t nearly as high on Teddy’s side of the battle, though, since his fixation on leaving his mark on the legacy of “bros before hoes” and getting his picture on the wall offers a contrived subplot that doesn’t really add anything. The war between Mac, Kelly, and Teddy is nevertheless a humorous farce on passing the party hat from one generation to the other.