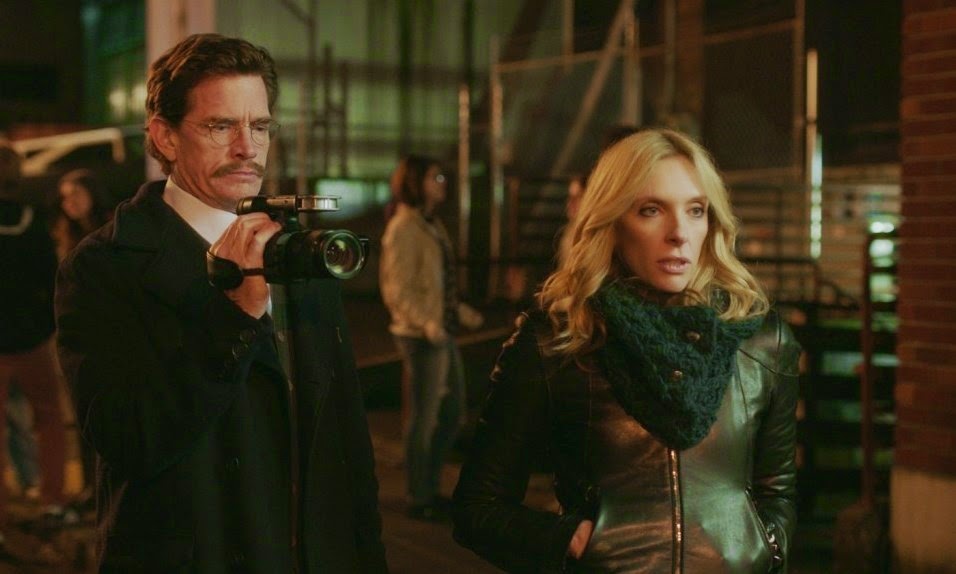 Long live the arts critic! Arts critics, especially music critics, are unsung heroes of motion pictures. They haven’t really gotten their due outside of Cameron Crowe’s stellar Almost Famous. Megan Griffiths Lucky Them, while not quite in the league of Almost Famous, offers an enjoyable tale about the invaluable role that music plays in one’s life as music journalist Ellie Klug (Toni Collette, Enough Said) learns to read between the lines that have defined her life.

A beautiful lead performance brings the fun and feel-good Lucky Them to life as Collette takes this washed-up rock critic on a personal journey that re-explores her love for music. Ellie begins the film as a critic equally complacent in her abilities to cut through the noise on the music scene and to build romantic relationships. She doesn’t want anything but sex from her boyfriend (so he dumps her) and she only wants sex from the hunky musicians she interviews (so she can’t interview them). The latter is an especially bad practice for an established print journalist at a time when the industry is going digital.

Ellie forces herself to get her act together when her editor (Oliver Platt) tasks her with an edgy assignment that caters both to her legacy as a rock enthusiast and to the personal element that slips into journalism in the age of the blogosphere. The task is this: Ellie must track down her first love, Matthew Smith, whom many alt-rock enthusiasts deem an influential icon. Matthew, Ellie’s editor reminds the audience, went missing and was presumed to have committed suicide, although Ellie believes that he is alive. He lives on as a myth and legend of rock and love alike.

Lucky Them lets Ellie get a handle on her herself and her love for music by introducing a pair of love interests who feed her musical inclinations. Lucas (Ryan Eggold) is an aspiring Damien Rice-type singer who busks for gigs until Ellie throws a business card into his guitar case instead of dropping a dollar bill. They meet, they have a few dates, and Ellie’s love life seems to be on the mend. Lucas’s songs also provide a nice riff to Lucky Them, such as a line about distrusting women who drink whisky neat as Ellie sips on one of her many Scotches. She catches the line and Collette’s reaction drolly tastes the irony of the tune.

The other man who enters the picture, though, is an old flame who didn’t work out. Charlie, played by Thomas Haden Church (Whitewash), is now dabbling in documentary films and he agrees to be Ellie’s wingman on her assignment so long as he can record her search for Matthew. Charlie, unlike Lucas, is a musically ignorant philistine. “I don’t like music,” he protests too much, often to a quick reply of “Any kind!” from Ellie’s music-savvy friends.

Ellie, when the story begins, is stuck on the memory of Matthew—she even keeps a box labelled “Matthew” under her bed—so it’s no wonder that none of her relationships—nor her thirst for music—ever move forward. She embraces the myth of Matthew as a kind of convenience, like a girl stuck on a high school relationship that’s ten years past its expiry date or like a fan hung up on Kurt Cobain when contemporary artists are being equally innovative. People, art, and culture all move forward, so one person’s lasting legacy shouldn’t hinder future contributors.

The structure and story arc of Lucky Them directs both sides of Ellie’s flawed character towards personal growth. Ellie’s relationship with Lucas, for example, hits on notes that echo the emptiness of her personal life, while her musical education of Charlie refreshes her tenure as an authority on rock. As Ellie becomes involved with a budding talent and teaches deaf ears to awaken to music, she reminds herself that covering the music scene is all about the thrill of discovery.

Lucky Them also lets one of the film’s many memorable songs guide a turn in Ellie’s search. The film boasts an excellently Shazaam-able soundtrack to complement the modest indie alt-rock aesthetic of Griffiths’ acoustic approach, but Lucky Them subtly allows the songs to provide the subtext. Ellie is a critic, after all, so the challenge of interpreting words and music—and of getting the feel of a song and creating an emotional connection to it—are inevitably part of the hunt.

Ellie’s musical soul-searching is refreshing, though, since Griffiths avoids letting the critic be defined by the men in her search. Ellie’s interactions and explorations with Lucas and Charlie prompt her own introspection as she learns to frame her musicology/love life without overtones of Matthew. Griffiths frequently favours showing Ellie in isolation and Ellie, like many a good critic, learns the most about herself simply by sitting alone, mulling over her thoughts with a drink and a record, and putting things into perspective.

Collette conveys Ellie’s growth and transformation from scraggly self-righteousness—Ellie seems especially sour and jaded when the film begins—and melts Ellie’s hardened outlook as the character warms to her challenge of trying new things. She opens up and embraces the personal character that informs and defines her love for music. Lucky Them is worth seeing for Collette’s amusing yet introspective performance alone.

The supporting players are all enjoyable with Church being especially fun as he goes in full Sideways-mode to offer another hilariously flawed character. A host of cameos by stars like Johnny Depp and indie darlings Lynn Shelton and Amy Seimetz add some star power and street cred alike. One wishes that the final confrontation with the players of Lucky Them would be more developed—and it’s surprising it isn’t given the star power in this pivotal scene—but Griffiths stays consistent with keeping Ellie’s personal journey as the scale of the film’s success.

Lucky Them is now available on home video in Canada from Mongrel Media.