Contest: Win 'All the Wrong Reasons' on DVD! (CONTEST CLOSED) 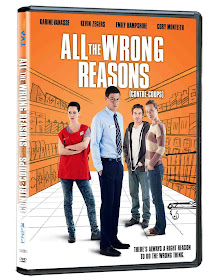 All the Wrong Reasons had a bittersweet debut when it premiered at the Toronto International Film Festival last year. The acclaimed film scooped the 2013 Grolsch Film Works Discovery Prize for writer/director Gia Milani, but as the film marked an introduction to a bold new filmmaker, it also offered a sad farewell to a popular Canadian star, Cory Moneith. Monteith’s fans will be pleased to see a different side of the Glee star in this fine ensemble film that features several of Canada’s hottest talents including Karine Vanasse (Polytechnique), Emily Hampshire (My Awkward Sexual Adventure), and Kevin Zegers (The Colony). All the Wrong Reasons comes to home video June 23rd from TVA Films and Pacific Northwest Pictures, but two lucky readers may take home a copy of the film on DVD. Answer the trivia below for your chance to win!

Synopsis: All the Wrong Reasons follows four co-workers at a big box department store who are all struggling to connect and come to terms with their lives.  Since witnessing a tragic family event, Kate (Vanasse) has kept herself as physically and emotionally isolated as possible while her husband James (Monteith), the store’s ambitious manager, does his best to force Kate out of her shell.  Missing intimacy, James becomes close with Nicole (Hampshire), a cashier who is clinging to what’s left of her youth while juggling single motherhood.  When a new temp employee arrives (Zegers), his determination to overcome his struggles and achieve his dream helps Kate to re-evaluate her life and begin the transition back to the person she once was.

Cinemablographer.com has two DVDs of All the Wrong Reasons to give away! All you have to do to enter is answer the following question:

What character did All the Wrong Reasons star Cory Monteith portray on the hit TV show Glee?

Email your answer and full mailing address to contests@cinemablographer.com with the subject “All the Wrong Reasons.”
(Limit one email entry per person please.)
Bonus entries go to anyone who likes/shares this contest on Twitter and Facebook!

All the Wrong Reasons will be available on DVD, VOD, iTunes, and SONY across Canada on June 23, 2014.

(And check back soon for a review!)

ALL THE WRONG REASONS_ENGLISH TRAILER from TVA Films on Vimeo.