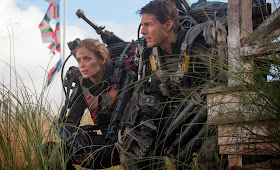 “Live, die, repeat,” is the tagline for Edge of Tomorrow, but it just as easily serves as a motto for a star operating under the Hollywood system. An inevitable machine of sameness, for better or for worse, allows actors to find a niche, build an audience, and rise to the top. Tom Cruise is one such star who has competently navigated Hollywood star economies to assert himself as a bona fide action star. From Top Gun to Days of Thunder and a few heroic dramas in between, the 1980s and 1990s easily establish a base that positions Cruise as an all-time star. Hollywood formulas, however, die by the virtue of their sameness just as easily as they succeed by them.


Edge of Tomorrow easily offers a return to form for Cruise and it marks his best action performance in over a decade. The film, however, is derivative on almost every level—aside from a strong and unexpected turn by Emily Blunt as his butt-kicking ally—and while Edge of Tomorrow brings Cruise back to life as an action star, both the film and Cruise’s performance suffer in comparison to similar and superior credits in his own career. (Ex: Minority Report.) He’s great in Edge of Tomorrow and the film is quality summer escapism, but Edge of Tomorrow succeeds less as a brilliant science fiction film and more as a cruel allegory for the hellish purgatory of the Hollywood star system.

Cruise stars as a likable Major William Cage, a spokesman/charming PR man for the futuristic army of the United Defense Forces (UDF). Cruise isn’t one to play the man on the sidelines for long, so after a swift preamble that sets up Edge of Tomorrow’s sci-fi premise (re: the world is at war with aliens), Cage is reluctantly drafted to the front line where he suits up as a soldier. The soldiers sport robotic—and oddly cumbersome—suits that embody them as pawns in the war machine. Edge of Tomorrow more than capably furthers Full Metal Jacket’s treatment of soldiers as extensions of their weapons well into alien territory.

Cage finds himself on a suicide mission as his squadron lands on a beach to launch a massive assault on aliens, which offers a chaotic image of war fittingly timed for the film’s D-Day release. The job turns out to be an alien ambush, so Cage and company are toast within minutes. Cage wakes up no sooner than one can say “Groundhog Day,” and he relives the battle on a cycle of live, die, and repeat.

Cage, like Cruise, is a smart and swift performer. He quickly learns the risky business of cyclical warfare and he adapts his performance to steal the show. He moves from bit player to supporting character to full-fledged action hero as he teams up with the reigning leading (Blunt’s Rita) to save the world.

The repetitive premise of Edge of Tomorrow, cut in an engaging tempo by editor James Herbert, lets much of the film rest on Cruise’s screen presence. He’s still as fun and likable as ever, and the role plays to the boyishness of his star power as Edge of Tomorrow adopts a comedic tone as it sees Cage get flayed, shot, and squished during his immortal rhythm of war deaths. The film essentially allows the audience to watch Cruise perform the same trick on a loop and it’s impressive how well the actor reinvents himself with each repetition. As much as one enjoys watching him do the same thing over and over again, it’s cruel to watch a man trapped in an unending role of sameness. The humour of Edge of Tomorrow and Cruise’s performance almost becomes self-deprecating as Cage/Cruise plays the same role repeatedly. Is he in on the joke?

The whole act of action hero immortality, though, becomes increasingly fascinating as the film progresses. It’s a running theme throughout the film, since Rita herself experienced the same cyclical heroism as Cage, which led her to win a prior battle against the aliens and become the UDF’s iconic war hero. Edge of Tomorrow shows that a true action hero never dies and, intentionally or not, the film brings Cruise back to life.

There’s something cruel, though, in the cyclical machinery of the film. Cage is both restricted and empowered by the robotic war gear he straps himself into each day of the battle. It is therefore the same for Cruise, whose performance is an extension of the Hollywood machinery. He comes back to life in a wholly mechanical role that he’s played before in films like Minority Report, War of the Worlds, etc., etc. and the biggest thrill of Edge of Tomorrow  watching Cruise come back to life as an action star.

Edge of Tomorrow lets Cage and Rita become true stars, however, once they advance to the stage of the game in which they may shed their RoboCop gear and break from the war machine. The same goes for actors, who really get to shine when they deviate from the formula of Hollywood and challenge themselves with roles that highlight the full range of their talents. Cage’s battle with the alien king is akin to Tom Cruise in Magnolia: it’s more fun to watch a hero when he’s not in shackles.

Alternatively, Edge of Tomorrow lets Blunt’s strong turn alongside Cruise give female action stars their equal due as the film taps into a growing demand for a change in the Hollywood system. It’s hard to overlook the fact that Blunt does something new in her rising career with Edge of Tomorrow while Cruise competently cruises in a role for which he is the ultimate prototype.

Edge of Tomorrow disappoints, then, because the formula of the film itself ultimately overwhelms even Cruise’s own ever-present star persona. The alien thing isn’t nearly as interesting as the underlying play on star performers, for Edge of Tomorrow is more or less akin to kids playing a video game as Cage and Rita memorize the pre-programmed manoeuvers of the baddies while replaying the levels and navigating them to win the game. The overall mechanicalness of the film never really allows for emotional engagement, so one isn’t much more invested in Edge of Tomorrow than one is while watching Super Mario play his own game of live, die, and repeat. Edge of Tomorrow is another cold visual effects extravaganza geared for teenage boys and premium priced movie screens. It’s disposable entertainment, but fun escapism at that.

One doubts that director Doug Liman (Fair Game) and his trio of screenwriters intended to fashion the alien warfare into such an intriguing allegory of star performers, so Edge of Tomorrow is considerably more entertaining, however, if one’s mind wanders from the CGI aliens and focuses on the novel twinning of Cage and Cruise. Edge of Tomorrow might not be the summer movie to end all summer movies, but as an accidental metaphor, it's one of the most intriguing summer movies in some time.

Edge of Tomorrow is now playing in wide release.


What did you think of Edge of Tomorrow?