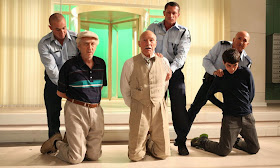 They say an elephant never forgets, but the reputation of the elderly flows in the opposite direction. Memory is a funny thing. The three old cards in Hunting Elephants, which opens the Canadian Film Institute’s 11th annual Israeli Film Festival on June 8th, have more wrinkles than most elephants do, but they haven’t forgotten how to put on a good show. This fun, light-hearted crime comedy is a geriatric caper in the vein of RED, but like the machine gun toting’ Helen Mirren pic, Hunting Elephants sees some grey-haired grifters with a few tricks stashed away in their trunks, so this consistently delightful film should please viewers young and old.


There’s actually a diverse range of ages in the team of unlikely bank robbers in Hunting Elephants. The mastermind behind the plan is thirteen-year-old Jonathan (Gil Blank), who plots revenge on the bank after his father passes away on the job and the pen pushers refuse to pay up on his life insurance and pension. Jonathan hatches the plan with his grandfather Eliyahu (Sasson Gagai) and his grandfather’s partner-in-crime Nick (Moni Moshonov), both of whom are former members of the underground, and a bank robbery sounds like the perfect escape from the boring old retirement home.

The fourth wheel of the team—and arguably its dramatic flair—is Jonathan’s estranged uncle Michael (Patrick Stewart), a hack actor living in London who flees his spotty production of a Star Wars themed Hamlet when news of a death in the family brings him sniffing for inheritance. Stewart reportedly stepped in when John Cleese became unavailable, and his theatrical strait-lacedness probably serves Michael better than Cleese’s broader silliness might have. Michael, a dandy, prefers to go by his full name and title of Lord Michael Simpson, and Stewart provides a fine air of ponce to clash humorously with the mix of old school crotchetiness and dirty-old-man vibe from Eliyahu and Nick, respectively.

Director/co-writer Reshef Levi keeps the action light and lively, but he also intercuts the film with elements of mockumentary to keep the audience guessing. Interviews with various secondary characters are interspersed throughout the film in which the witnesses to the bank robbery give their own versions of the events that unfold in the primary narrative. Things don’t always match up in the perspectives and the conceit plays on both the potential senility of the three elephants and their elusive memories, as well as on the legitimacy of recorded narratives versus those captured only with experience. The occasional cut to a present-day interview reframes the caper as an action in the past, so Hunting Elephants plays on the viewers’ expectations that the revisit to the events means that the bank robbery resulted in either a roaring success or a colossal failure. Either outcome seems feasible given the foibles that ensue during the merry band’s preparations. The more Hunting Elephants puts the audience in suspense, the more it portrays the robbers as a band of likable underdogs one wants to see rob from the rich.

The jovial camaraderie of the four actors ensures that Hunting Elephants is briskly paced escapism. This is a fun crowd-pleaser to be sure, but it’s also a smart and engaging fish-out-of-water tale about enjoying life to the fullest in the face of aging. As Jonathan plans most of the technical specs of the operation, the three veterans each contribute their own expertise and life experience to fill in for his deceased father. Advice on going for the girl and such gives the whole team a boost of confidence, for Michael’s own bashfulness around girls fits right in with the hound dogs of the retirement home who line up for a show whenever the resident sexy nurse, Sigi (Rotem Zussman), gives the comatose patients a sponge bath. Viagra jokes are thus inevitable, but Hunting Elephants spends much more time having fun with the old timers than it does making jokes at their expense.

Hunting Elephants also thrives on the self-deprecating humour that lets the veteran actors have fun in their age appropriate roles. Eliayhu, Nick, and Lord Michael Simpson all poke fun at their geriatric shortcomings, and Gagai, Moshonov, and Stewart are clearly having a ball giving the three men one last hurrah. The humour of Hunting Elephants is a mix of graceful aging and a mix of defiance. The balance is consistently appealing and puts age before beauty in this entertaining romp.

Hunting Elephants screens at the Israeli Film Festival on June 8 at 7:00 pm at Library and Archives Canada, 395 Wellington St.

What did you think of Hunting Elephants?