“I Wonder What Adam Shankman Could Have Done with That.” 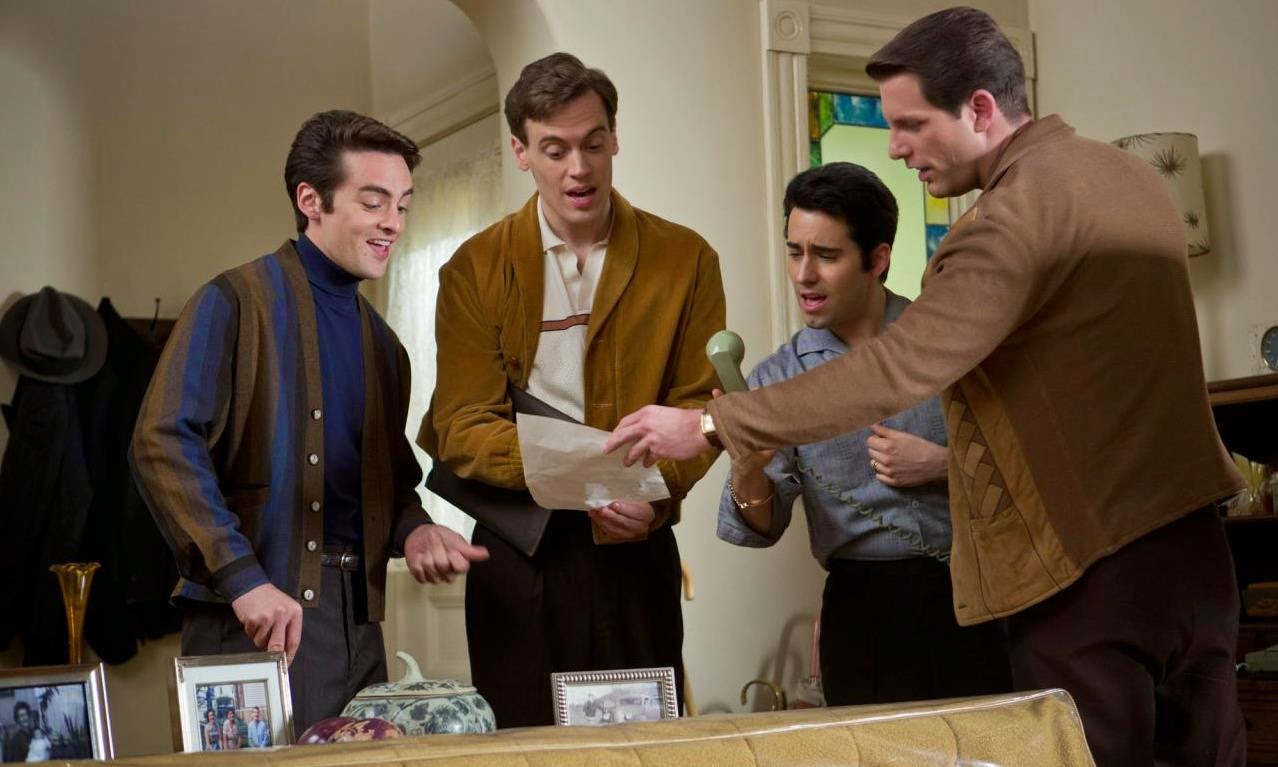 Jersey Boys marks the first—and hopefully only—time I have left a movie thinking, “Gee, I wonder what Adam Shankman could have done with that.” Yes, even Mr. Hairspray might have been a far better fit for this Broadway adaptation than the great Clint Eastwood. Jersey Boys sure looks and feels like a Clint Eastwood movie, though, for it’s sombre, serious, and dark, yet the chocolate-malt-and-jukebox-vibe of the material might simply be better suited to the bubbly candyfloss direction of filmmaker who better understands the energy of the genre. Jersey Boys is possibly the most inert and lifeless musical ever put to screen.

It’s disappointing to see the masterful Mr. Eastwood plop out his weakest film as a director in a career that otherwise shows no sign of sagging, especially since Eastwood’s impressive coup as a filmmakers includes some beautiful credits composing the music of his own films. Jersey Boys isn’t quite on the same scale as tinkering on the ivories for Million Dollar Baby, though, and this stage-to-screen endeavour just doesn’t jive with the Eastwood oeuvre. Jersey Boys features one great number that fits the conventional bill for a big screen musical… and it appears in the closing credits as if tacked on to honour its source. (I haven’t seen the musical, so I’m saying this as a filmgoer who simply approached Jersey Boys with the idea that it’s a musical of the song and dance variety.) The awkward Jersey Boys Jersey never really looks or sounds like a musical, and even by the closing number it feels as if it has no idea what kind of film it wants to be.

Jersey Boys presents the story of Frankie Valli and the Four Seasons by taking the route of the backstage musical and presenting the songs as isolated concert performances. That’s all fine and dandy, since Eastwood seems more comfortable dramatizing the group dynamics and family struggles of Frankie Valli (John Lloyd Young) and his best friend Tommy DeVito (Vincent Piazza) than he does with the awkwardly and statically staged songs. Jersey Boys tells the boys’ story in a GoodFellas style coming-of-age tale in which friends break the fourth wall and speak directly to the audience while they play out their tomfoolery rising to the top. The direct addresses to the camera, which weirdly never come from Valli, work somewhat in the dramatic moments of the film, but they fall flat in the midst of the film’s sporadic song numbers. Characters such as the restless Nick (Michael Lomeda) turn and talk to the camera in the midst of a chorus, and Jersey Boys doesn’t seem to know what to do with the material. The GoodFellas likenesses aren’t done any favours by the frequent references to Joe Pesci—“that Joe Pesci,” the characters say—who crossed paths with the Jersey boys and eventually won an Oscar for playing a mobster named Tommy DeVito in Martin Scorsese’s GoodFellas. (The tidbit makes for the most intriguing aspect of the film.) Maybe it’s the stage play or maybe it’s the direction, but either way the mid-musical confessions just don’t work.

Delivering a musical in such a plot-heavy format is a risky move, too, when the film brings the stars of the Broadway stage production to the screen. Young, Piazza, Lomeda, and Erich Bergen (as Bob) all have terrific vocals, but they have varying degrees of screen presence. Bergen and Piazza hold the camera with the strongest command while Lomeda is fairly forgettable (although it’s a nice coincidence that Nick blurs into the background). Young, on the other hand, lacks the dramatic chops required to convey a screen performance, so Jersey Boys ultimately falls flat because its leading man is a dull headliner. It’s a shame that Jersey Boys favours the drama and performs songs so infrequently, for the film fails to capitalize on the talent at hand. Ditto Christopher Walken who is strong in a small (and nearly thankless) supporting role as Gyp de Carlo, a neighbourhood mentor to Frankie and Tommy, although his few substantial appearances, including the scene that sees the band’s break-up, are dramatic highlights of the film.

Jersey Boys charts a conventional series of greatest hits to map out the rise of Frankie Valli and the Four Seasons, and the few songs that appear are the kind of poppy numbers one hears at 1950s-themed diners playing from the jukebox at a reasonable volume. It’s pretty square and less exciting than a vanilla shake. All the crooning also makes for a pretty boring watch, since Eastwood’s signature style doesn’t do much to bring the material to life, although this flaw in Jersey Boys might be a product of the greater system of Hollywood genres.

Musicals since the days of Fred and Ginger are bright and frisky, and they gained a whole new life once Technicolor entered the equation. Musicals, as a razzle-dazzle affair, rely heavily on visual pizzazz to sell the showmanship and the obvious escapism of the musical moments. Take the vibrant colours of Singin’ in the Rain, or even the ultra-stylish theatricality of Chicago, and one sees how much tone and atmosphere can put audiences in the groove. Eastwood, however, reteams with his frequent cinematographer Tom Stern and they bathe Frankie Valli and the Four Seasons in the same moody low-key lighting that defines an Eastwood film. The dark shadows feel spot-on for the gritty fight of Maggie May in Million Dollar Baby or for Laura Linney’s wrenching “Lady Macbeth scene” in Mystic River, but they put a damper on the Four Seasons. Jersey Boys looks like Funeral: The Musical! Sadly, it feels like a death of sorts.

What did you think of Jersey Boys?