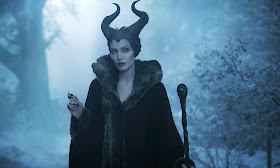 Angelina Jolie retains her title as the reigning Queen of Badassdom with Maleficent. The Oscar winning bad-girl-turned-Supermommy assembles many of the facets of star persona, plus some extravagantly accentuated cheekbones, and delivers a deliciously malevolent Maleficent who is both hero and villain alike. The film somewhat disappoints overall, but Jolie’s inspired incarnation on the beloved Disney baddie ensures that Maleficent at least lives up to some of the expectations.


Maleficent marks another entry in a string VFX re-imaginations of childhood favourites. The film easily sits a step above the epic bastardization of Oz: The Great and Powerful, which turns classic witches into cackling bitches, but it struggles to meet the modestly placed bar of Snow White and the Huntsman, which does the evil-queen-and-princess thing somewhat better. Maleficent is undoubtedly an inspired, if wildly uneven, revisionist take on the classic fairy tale of Sleeping Beauty. Maleficent has moments of greatness—mostly whenever the camera fixes upon Angelina Jolie—and it might have hit the same height overall if it were only a few shades darker.

The problem, essentially, is that director Robert Stromberg seems unsure what kind of experience he wants Maleficent to be. The film is part kiddie-Disney flick and part Gothic nightmare, and neither element really jives with the other. Stromberg, a two-time Oscar-winning visual effects wizard and art director (he won Academy Awards in the latter category for Alice and Wonderland and Avatar), has the talent to ensure that every frame of Maleficent is a visually astounding feat, but he doesn’t grasp the tonal inconsistencies that arise whilst injecting a potpourri of visual effects into a film.

The realization of Maleficent, for one, is a perfect marriage of newfangled VFX and old school wizardry. Her wings alone are impressive visuals that support Jolie’s commanding poise and presence, and they afford Maleficent an eerie gargoyle vibe in this fairyland re-imagining until Maleficent’s human love interest, Stefan (Sharlto Copley), clips her wings in cruel trick. It’s a testament to Jolie’s performance, then, than Maleficent is twice as intimidating when she’s robbed of her wings.

Likewise, all the visuals that complement the dark side of Maleficent, such as the hypnotic green mist that arises while she conjures her powers or the anamorphic tricks with her crow/manservant Diaval (Sam Riley), make for a spellbinding bigscreen experience. (Maleficent looks perfectly grand in 2D, so there is no need to splurge on 3D glasses.) The striking cinematography by Dean Semler provides an evocative play and light and dark that makes the sprightly GCI visuals almost counterintuitive. (The sequence of Maleficent riding to the castle as the curse reaches its climax, for example, is a visually dazzling sequence.) The costumes by Anna B. Sheppard are a brilliant assemblage of fur, skin, and bones that air tailored perfectly to Jolie’s intimidating stature. (She rocks the horns and headdress as if they’re a natural extension of her body.) Maleficent finds power in the dark envisioning of the beguiling baddie, but, unfortunately, the direction of the film is equal parts night and day.

For every brilliant gothic element in Maleficent’s visual design, a chorus of cuddly Disney characters throws the tale back into Storybookland. Silly, ugly troll things pop up and act cute while some fluffy creatures push Maleficent towards “Happy Working Song” territory. The fairies played by Juno Temple and Mike Leigh vets Lesley Manville and Imelda Staunton, on the other hand, offer impressive feats of innovative effects by morphing the familiar actresses into pixie-sized play toys. All this CGI cutesiness provides some comic relief for the kids in the audience after all the scary bits with Maleficent, but nothing quite ruins the experience of watching a dark fantasy film like the laughter of a child.

Perhaps the overall innocence of Maleficent is inevitable given the circumstances of the its production, but Maleficent can’t shake the sugarcoating of the Disney brand. The same problem hinders the revisit to Mary Poppins in Saving Mr. Banks and ultimately leaves audiences wondering the purpose in returning to a classic story if the original vision maintains its authority. Every time Maleficent lets the kids come up for air, it inevitably deflates the thrill of seeing Sleeping Beauty get a full-blooded reimagining. 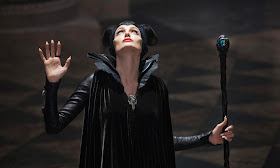 Maleficent at least exceeds Saving Mr. Banks by overcoming the mansplaining legacy of Walt Disney classics. If Saving Mr. Banks belittles its heroine as another servant in the grand Disney design, then Maleficent gives an impressively feminist re-imagining of one of the many fables that teach little girls to be docile as they await Prince Charming to ride up on his white horse and save them with a kiss. Jolie deserves full credit for providing the audience with a Maleficent of three-dimensional psychology, for she fully humanizes the great character to make her a hero and villain alike.

Maleficent provides the context for Maleficent’s wickedness before giving a full redo of the Sleeping Beauty tale, and the fable of Stefan betraying Maleficent makes her both a character worthy of sympathy and a woman who refuses to be a victim to self-serving men. The scene in which Stefan betrays Maleficent itself has startling implications since he violates her after gaining her trust and slipping something into her drink. The simple fact that Maleficent is a Disney film, however, never really lets the film expand upon the treatment of Maleficent as a metaphor for rape culture, since it cuts to woodland animals instead of developing the thought, but the subtext is plainly there in this one crucial scene of exposition. Copley’s wooden performance, which descends to Rufus Sewell-grade stiffness, also ensures that Maleficent’s villainy is outmatched by a greater innate evil that lies in predatory men.

Some viewers might therefore interpret the spell Maleficent casts on Stefan’s daughter Aurora as just another case of “Hell hath no fury like a woman scorned,” but the journey on which Jolie takes Maleficent sees the character shed her vengeful skin. Maleficent earns her wings by taking a fuller, more compassionate perspective that uses her powers to better others rather than simply to advance her own gain. It all happens as she watches over Aurora (who grows up in a range of actresses from Jolie’s own daughter, Vivienne, and finally as Elle Fanning) and recognizes that she herself strips a young girl of her agency by evoking the curse.

Maleficent finds its own kind of happily-ever-after in the end as the film rejects conventional fairy tale closure, yet offers an unmistakable whiff of Disney ideology as Maleficent evolves from malevolent to matronly. The arc, however, has a bittersweet taste since Jolie herself carries Maleficent as a wickedly entrancing character even after she wanders back from the dark side. It might not entirely be the Maleficent one hoped for, but Jolie’s Maleficent sure is.

Maleficent is now in theatres from Walt Disney Pictures.

What did you think of Maleficent?