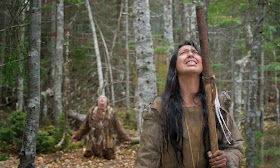 When the Innu and Inuit first met, the first major meeting of cultures on Canadian soil was a giant case of boy trouble. An essential chapter of this nation’s history receives a rare telling in Maïna, a Best Picture nominee at the Canadian Screen Awards earlier this year, and the result is a disappointing hybrid of soap opera romance and those Canadian heritage minutes that used to play during the commercial breaks of Hockey Night in Canada. Maïna tells a story that predates the arrival of European colonists, but the encounter between Aboriginal tribes doesn’t receive the treatment it deserves. This well-intentioned film makes admirable leaps in terms of representing Aboriginal customers, cultures, and practices, yet it belittles its subject with its melodramatic treatment.

The awkwardness of Maïna appears at the outset as the film struggles to find a proper voice with which to tell the story. The dialogue is predominantly Innu and Inuktitut, yet Maïna essentially favours English as the authoritative language. The film begins with an intriguing dream sequence that sees Maïna (played by an excellent Roseanne Supernault, whom viewers might remember from Rhymes for Young Ghouls) tangle with wolves and potential love interests. She describes her people and culture in Innu before the picture dissolves as her voiceover fades into English. The language spoken between Maïna and her people is Innu and Maïna even uses Innu subtitles in lieu of English when the Inuit first arrive, so there’s no discernable advantage in marketing or accessibility by putting such an awkward colonial stamp on this dramatization of Aboriginal culture before European empires sailed in.

The gratuitous voiceover might be Maïna’s fidelity to its source, i.e. the book of the same name by Dominique Demers, but it inadvertently makes this otherwise notable feat of cultural representation carry an unshakable whiff of ethnography. (The opening epigraph by HP Lovecraft doesn’t help matters of “othering,” either.) Maïna’s voiceover tells a lot about her people, for she explains tribal power dynamics, myths, backstories, and other cultural tidbits. However, most of these facets of the Innu and Inuit arise through interaction and dialogue anyways, so the Voice of God narration adds little besides awkwardness. All it really does, however, is drip Maïna’s journey in unnecessary sentimentality.

All Maïna seems to worry about, see, as she journeys from the wooded mainland of the Innu tribe to the frigid north where the Inuit live, is that she can’t seem to find a man in The Land without Trees. The landscape is barren, not just of familiar greenery, but also of romantic prospects. No hunky guys in the arctic take a shine to Maïna since she is clearly an outsider: her appearance is different, her clothes are different, and her language is different. The women of the Inuit tribe don’t like her, either, because she hunts, and the strapping young men of the tribe think her tomboyishness is a symptom of sorcery. Bewitched by a cunning huntress the Inuit are not, so Maïna is homesick and love-struck at the same time. Boo hoo.

As Maïna craps out while playing the dating game in the Arctic Circle, Maïna does its heroine a disservice as the story goes along. Maïna, at its core, carries a strong feminist tale as Maïna races and navigates two cultures when the power-hungry men of her tribe ambush the Inuit who stumble into Innu territory on an innocent exploration. She’s a strong maternal figure, which seems pivotal to the film’s representation of Aboriginal culture, for she carries the future of her tribe by pursuing its youngest warrior, taken by her Inuit love interest Natak (Ipellie Ootoova) in a game of hard to get, and forging a union between the two tribes through love and understanding. The woman who begins the film as an irrepressible heroine becomes consumed—and undone—by love. The romance isn’t nearly as interesting as the story of cultural encounters, either, so the great premise loses steam quickly once the love story overtakes it, and the highlights of the film eventually become the picaresque landscape and all the shots of moose, elk, and polar bears that Maïna and company encounter en route to the north.

Supernault is consistently strong, though, in a resilient performance in the title role. Maïna is a role of remarkable physical and emotional range, and the actress carries the film over considerably varied terrain. Some of the supporting players are less convincing—but most of them die quickly—while a trio of veteran actors give strong performances as the elders of two tribes. Graham Greene makes a strong impression in a brief appearance in the first act, while Atanarjuat’s Natar Ungalaaq is fine and subtle as the elder of the Inuit. Tantoo Cardinal, finally, gives a haunting performance as Tekahera, Maïna’s mother and the spiritual guide of both the Innu and the film itself.

The production itself is as much of a mixed bag as the story and performances, which unfortunately reminds the viewer of Maïna’s shortcomings. The fatal flaw of Maïna, despite the hiccups in storytelling and perspective, is the disastrously distracting cinematography by DP Allen Smith. Maïna looks as if it was shot on a bizarre frame rate, for the actions of the characters sputter awkwardly whenever movement marks the frame. It looks as if everything means to represent a dream or a fantasy, or as if director Michel Poulette has an overzealous fondness for slow motion or as if the film encountered a snag while rendering (or buffering) and nobody bothered to clean it up. It nauseates even from the back of an empty theatre, so avoid the front row at all costs.

The costumes by Véronique Marchessault, on the other hand, are exquisitely detailed designs. The music by Michel Cusson and Kim Gaboury is equally stunning. The beats of Maïna are moving and propulsive, driving both the action and the romance, and the score is infused with elements of Aboriginal harmony. It’s a brilliant score, so Maïna hits notes of greatness whenever Poulette simply lets the power of the landscape take effect with the music.

Maïna isn’t The National Parks Project, though, so it misses an opportunity to do more with its potential. The film is certainly a well-meaning effort to represent history from perspectives rarely seen, and it contains a handful of performances worthy of attention, but Maïna is ultimately a war of great representation and poor dramatization. Maïna, unfortunately, is just never the sum of its parts, nor is it the desired product of its good intentions.

Maïna is currently screening in Ottawa at Landmark Kanata and in Toronto at the Carlton.

What did you think of Maïna?