'The Camel Lady and Her Black Dog'

(Australia, 110 min.)
Dir. John Curran, Writ. Marion Nelson
Starring: Mia Wasikowska, Adam Driver
What’s the deal with camels? Camels don’t figure into the pictures much outside of advertisements for cigarettes or as icons of exotic places. The animals with the humps rarely receive prime billing in the movies even though they have an inherently cinematic quality to their peculiar frame. Tall, but not as tall giraffes, camels don’t need a long shot to share the screen with a fantastic actress. Their long, gangly frame also suits widescreen perfectly as they stretch across the screen with a dynamic hump in the middle that reaches for the sky. They seem like a cinematographer’s best friend! Also, they spit.


The camels themselves aren’t the true stars of Tracks but they make a case that more films need an ensemble of furry creatures. The true star of Tracks, of course, is leading lady Mia Wasikowska in a career-best performance. Wasikowska plays young adventurer Robyn Davidson in this true story of Davidson’s solo trek across 2700km of sun-scorched Australian desert. (Tracks is based on Davidson’s book of the same name.) Davidson, accompanied only by her loveable dog Diggity and a quartet of unpredictable camels, guides audiences through an inspiring tale of grit, determination, and spirit.

The film introduces Robyn as a wayward nomadic figure as she stumbles into the small town of Alice Springs in search of work. She’s willing to work for camels, which is an unusual quest in itself, and the townspeople seem doubly taken aback when they learn why she needs them. Walking across the desert alone is a bold feat. Few, if any, of the people Robyn encounters believe that she can do it. Robyn, however, remains undaunted by the scale of her task and, in a tale akin to that of Cheryl Strayed in Wild (which also gets a page-to-screen adaptation later this year), she resolves to prove that any ordinary individual can meet an extraordinary challenge if she simply has the will and courage to do so.

Tracks offers a refreshing jolt of life for travel films as Robyn treks across the desert. After the likes of films such as Walter Mitty, which equate personal growth with stamps on a passport and douchey selfies, Tracks uses the metaphor of Robyn’s journey to convey for the distance one can evolve in a singular experience. Tracks is both an exhilarating and moving adventure as Robyn braves the elements (and gets her camels in line) as she pushes herself further and further into an increasingly arduous task. 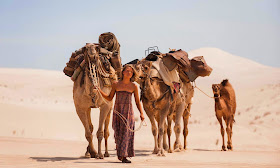 Tracks obviously serves as a visually arresting travelogue as Robyn traverses the Australian desert. Her journey occasionally intersects with an American photographer named Rick Smolan (the ever-likable Adam Driver from Frances Ha and Inside Llewyn Davis) who documents Robyn’s expedition for her sponsor, National Geographic. The film therefore gets many opportunities to capture Robyn, Diggity, and her camels in the picturesque barrenness of the desert. Each frame of the film is stunningly gorgeous and could easily be ripped from the very best of travel magazines. (Tracks even cites Smolan’s photography as a source of inspiration in the end credits.) Cinematographer Mandy Walker (Australia) finds a note-perfect lensing of the natural light and the expansiveness of the landscape to harness the elements as the appropriate visual complement for Robyn’s story. Some sweeping bird’s eye aerial camerawork tracks the unfathomable distance that Robyn must cover while the groundwork of Walker and director John Curran’s compositions see Wasikowska’s petite frame engulfed in the enormous openness of the desert. Robyn’s isolation is paramount at almost every turn, which makes her quest more engaging and moving.

Tracks also keeps Robyn’s indefatigable spirit present in every frame. This sensation comes partly through the aforementioned camels that bob amusingly across the frame as Robyn guides them through the desert. The four camels have undeniable personalities, offering characters both comical and menacing as Robyn tangoes with their beastly unruliness, and they’re as much a part of the journey as Robyn herself.

Equally, if not especially, involving is Diggity the dog. This dog steals the spotlight from even the camels as he buoys the film with life and spirit, and the emotional resonance of Diggity’s contribution to the film is unexpectedly jarring in the film’s most candidly moving turn of events. Curran uses dogs as a motif for the spiritual element of Robyn’s journey, as flashbacks to a childhood dog are intercut with Diggity’s doggone scrambling around the desert and the tangible connection and screen chemistry between Wasikowska and the dog speaks extensively to the isolated heroine at the heart of the tale.

Tracks wholly belongs to Mia Wasikowska, though, who pushes herself to new heights with this performance. She undertakes a performance that is notably physical, not merely for the brute nature of Robyn’s trek, but also for the sheer emotional weight that Tracks asks her to carry. The impressive make-up by Megan Tiltman accentuates the physical toll of Robyn’s journey (the sunburns alone bring audible gasps from an audience) and complement the subtlety of Wasikowska’s largely bodily performance. Tracks has an emotional scope as profound as its scenery thanks to the vulnerability and tenacity Wasikowska brings to life as this spirited traveller.

Tracks is especially interesting in the way it confronts Robyn’s own antisocialism and guardedness as it brings Robyn closer to her endpoint. Wasikowska plays Robyn as remote and standoffish in her initial encounters with Rick and the other people she meets along the way—she seems far more comfortable talking to Diggity—but the people she encounters as her journey progresses form a central core of her story. Robyn wills herself to complete the journey in total isolation, yet a few key figures provide invaluable support and relief along the way. Her encounters with helpful adventurers, who dub her “The Camel Lady” with mythic awe, show that the relationships one cultivates while travelling are as essential as the journey travelled itself.

The encounters with the Rick and several Australian aboriginals also make the segments of the trip that Robyn traverses alone even more compelling as they let Wasikowska grapple with the heroine’s belief that she is fully alone in the world. Tracks, powerful in its visual and emotional scope, is easily one of the best films so far this year and it offers perfect alternative fair for summer. Hitch a camel to the theatre today!

Tracks is now in theatres from Mongrel Media.
It screens in Ottawa at The ByTowne until July 3 and at The Mayfair July 4-10.

What did you think of Tracks?