Start Your Planning, TIFFgoers: Dates and Ticket Packages for #TIFF14! 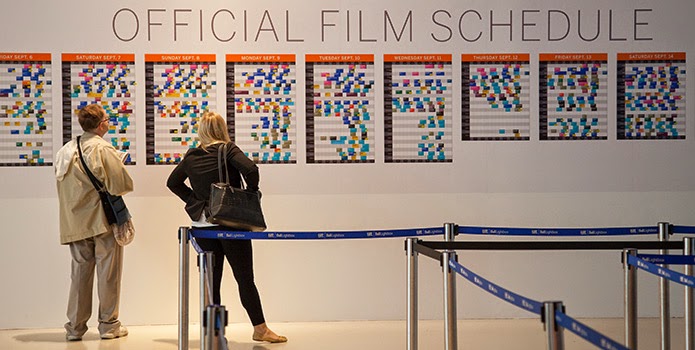 The Festival is just 85 days away! The Toronto International Film Festival released the dates and ticket packages today, so TIFFgoers can start their planning! Choosing the right ticket package for the optimal festival experience can be daunting, but there’s enough choice and variety that festivalgoers can expect to be satisfied with their screenings regardless of the package they choose.


TIFF Choice Packs let the programmers choose a schedule for festivalgoers, which is the best option for anyone with a distinct taste (ie: Midnight Madness or Wavelenghts fans) or for anyone looking to try new things. The My Choice Regular Flex Pack, on the other hand, lets festivalgoers buy tickets in increments of ten and is probably the safest bet for anyone looking to choose their own adventure or plan screenings with friends. I’ve also done the My Choice Daytime Pack, which offers 20 tickets at just $226, and that’s probably the best option for folks looking to keep the costs down on daytime screenings and do star-studded Premium screenings at night. You need to be a bit more open to what you see with that option, but you’re also bound to discover some films that you might have missed otherwise.

Premium tickets, on that note, are available in flex packs and as single tickets. New to the Festival this year on the premium screening front is the Buzz List Pack, which offers priority access to five premium screenings. At $1500, it’s an option few festivalgoers can afford, but if nabbing a prime seat and hob-nobbing with stars at, say, 12 Years a Slave, August: Osage County, Gravity, Dallas Buyers Club, and Rush defined your festival last year, this is easily most the ballin’ option. There’s still the option of single ticket day (which is annual chaos, but an essential part of the experience nevertheless) and rushing, so don’t let the numbers and options overwhelm you. There are endless opportunities to star gaze and see movies regardless of budget!

The gist of the packages is best explained in this delightfully cheesy How-To Guide from TIFF 2012:

Other news on the festival front gives very good news about the venues for this year’s festival. The Princess of Wales Theatre, which is probably my favourite venue for stars and screenings (that or the VISA), will host screenings for the duration of TIFF ’14, as will the Winter Garden and the Isabel Bader. Other venues such as TIFF Bell Lightbox, Roy Thomson Hall, the Bloor, and Ryerson are all returning, as is the Scotiabank, which lets festivalgoers discuss their favourite films while they navigate Temple Grandin style corrals. It’s all part of the experience!

Dates and Ticket packages for TIFF 2014 are as follows:

August 21 to 23:
Single tickets on sale for Patrons Circle members (according to level).

August 24 to 25:
Regular Flex Pack and Premium Flex Pack ticket selection window for TIFF Members (Contributors and up, according to level): online, by phone, and in person.

August 30:
Visit tiff.net to see what tickets are available for single-ticket day.

Beginning September 2:
Tickets for My Choice and TIFF Choice packages available for pickup at the Festival Box Office with pickup voucher (September 1 for  TIFF Members, according to level).

MY CHOICE PACKS   Select your films

Single tickets are available for purchase in person, by phone, or online beginning August 31. (Patrons Circle members can purchase
between August 21 and 23, according to level.)

*Prices include HST, but do not include fees.
**Packages include regular screenings only, unless otherwise noted.

And to get you in the mood: