Call Me Biased, but I Was Totally on 'Her' Side...

“He gives me that look…”

“What look?”
“That look that says, ‘Your life is trivial. You are so trivial.’”
-Clarissa Vaughan (Meryl Streep), The Hours

Call be biased, but I was totally on her side the whole way through Him + Her. Maybe it’s the die-hard Streep fan in me, yet the chorus of Meryls makes a very compelling case in their twenty-three minutes of (seven) screentime. The Meryls, interestingly enough, don’t actually make a plea in a divorce case against a host of Jack Nicholsons as I originally thought they did—they don’t intentionally, anyways—but the malleability of this he said/she said piece is truly brilliant. 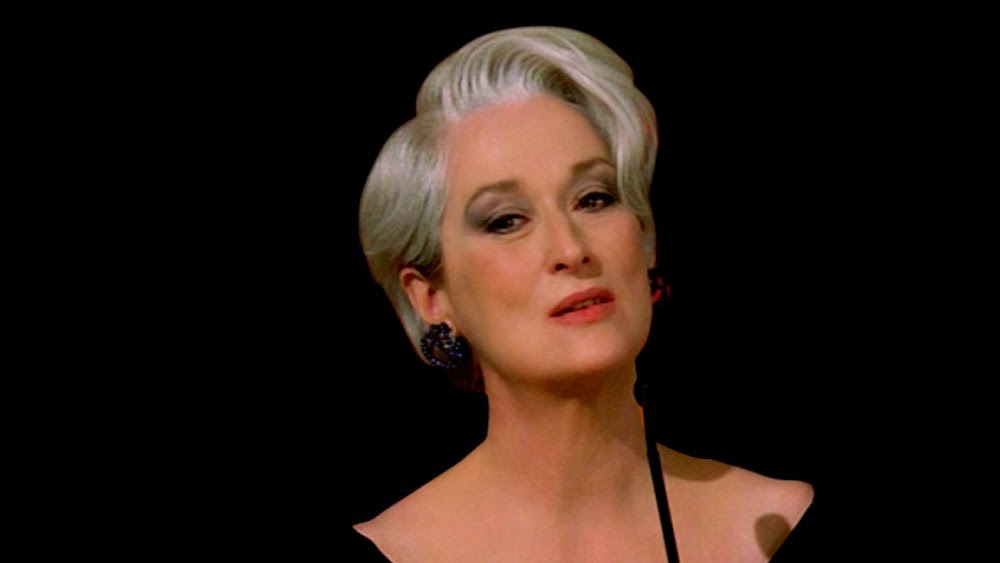 A friend and I finally took in Candice Breitz’s Him + Her installation at the National Gallery this week, and the piece might be one of the most fascinating studies on screen acting, star performance, and the incalculable wealth of gender roles and stereotypes embedded within the characters the stars play. Breitz, a South African-born, Berlin-based video artist, snips various roles from the filmographies of Meryl Streep and Jack Nicholson for this 2008 piece that transforms the two great actors into a dramatic chorus on femininity, masculinity, and everything else in between. The installation compromises of fourteen monitors spread across two darkened rooms—seven in each—and each room gives the respected actor a voice in the conversation. Snippets of each actor’s filmography are then deconstructed with the actor isolated on a black canvas as playback, space, and time play with the performance.

Meryl Streep, whose story we took in first, easily steals the conversation. The intoxicating mosaic is any cinephile’s dream gallery of hallmark performances. (Sophie’s Choice and The Devil Wears Prada in the same conversation? What a scream!) Side by side, though, the range of Streep’s work is genuinely astonishing as she assumes a cast of superficially dissimilar characters and captures a collective humanity within.

It’s not so much the remarkable scale of her skill on display that makes Her impressive even to a die-hard Streeper like myself, but rather the layer of communal verisimilitude that one sees in Streep’s masterful range of personas, accents, and screen identities. As clips from Out of Africa and The Devil Wears Prada go in conversation with one another about the sense of public failure a woman feels (or shoulders) when a marriage fails, or when Miranda Priestly (The Devil Wears Prada), Joanna Kramer (Kramer vs. Kramer), and Suzanne Vale (Postcards from the Edge) debate success in terms of careers and family, Her is a gallery of unique voices echoing the same frustration across the years. Clarissa Vaughan’s bangles jangle as Breitz takes Streep’s Dalloway­-ish breakdown over throwing a party in The Hours and turns it into comic flight of malaise by putting Streep’s articulation of her character’s anguish on a loop. Ditto the plate-smashing of the ultimate cancer-weepie One True Thing for an impeccable look at a woman who has been defined solely by her role as a mother and looks at death as a kind of personal failure on the parenting front. 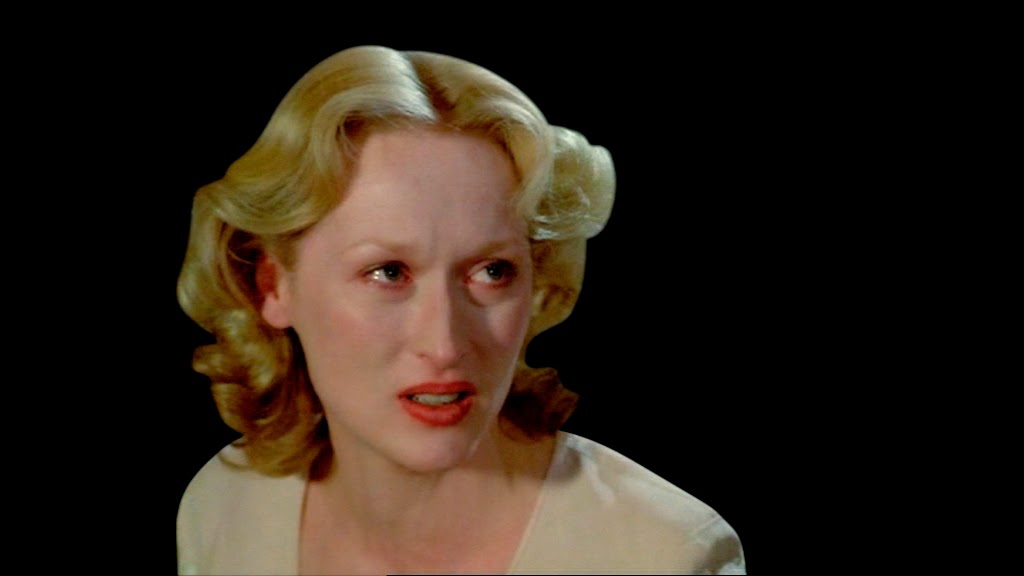 Cuts to She Devil and The Manchurian Candidate underscore the ways that films and culture more broadly characterize/perceive career-driven women. The coldness of Plenty provides a similar effect, while the snippets of the fallen Meryl in The French Lieutenant’s Woman draw attention to the way sexualized women are perceived differently from sexualized men. Throw in one of Streep’s most devastating performances—Francesca in The Bridges of Madison County—and Her makes the pain of being unhappily trapped in a wifely role tangibly unbearable.
Breitz’s shrewdly edited tapestry creates communal voices through the singular Streep. “It’s autobiographical?” asks Sophie as the Streeps draw one in into the range of lives Streep has enjoyed. There is an unmistakable layer of authority to these performances, which, as Karina Longworth notes in her recent “Cahiers du Cinéma” book Meryl Streep, shows a perceptibly pro-feminist current in Streep’s filmography of strong female characters. Breitz even takes select snippets of dialogue and uses them as voiceover, and alternates the image to accentuate the uncanny multiplicity. The roles Meryl plays are inevitably formed by, and are arguably a response to, the roles imposed on women in a patriarchal society. 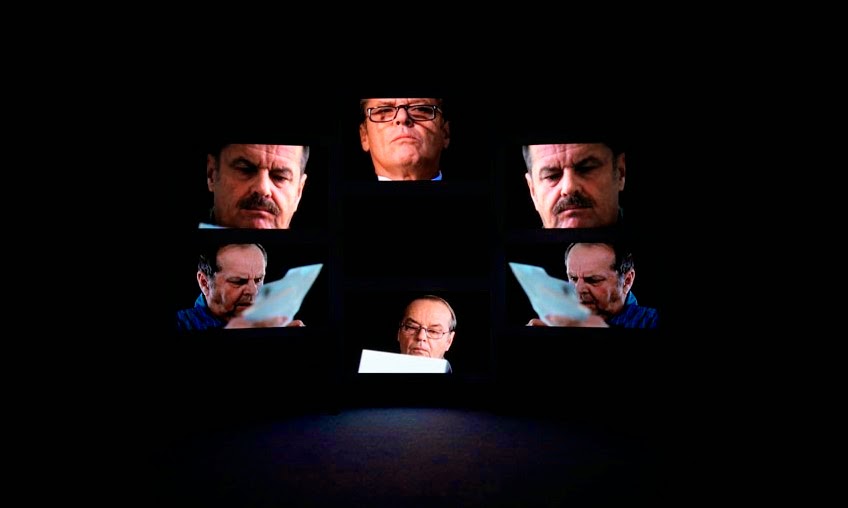 Walk into the Jack Nicholson room, though, and one gets a different story. Him features a wealth of Nicholson’s zaniest and strongest performances—The Shining, One Flew Over the Cuckoo’s Nest, and As Good as it Gets to name a few—and while the strength of Nicholson’s skill is apparent on every screen, there is an inextricable Jack Nicholson-ness in each character. It’s always him, the actor or the star persona, that one sees in Him.

Perhaps that’s the point, though, as the twenty-eight minute Him (slightly longer than Her’s twenty-three) always makes it all about him. Johnny complains about all work and no play while Warren R. Schmidt stares off into space wondering about the time that went by. While Her samples Streep’s oeuvre to find lines and gestures that testify to the struggle for, say, a work/life balance (the piece encompasses many other facets), Him uses excerpts of Nicholson’s career to create a portrait of self-serving madness. Lines about having a good time, struggling to get it up, size, and such create a man obsessed with and defined by his sexual performance. It’s crazytown all right, as Nicholson’s suave looniness makes for a great show, but one sympathizes with her the more one spends time with him.

What’s really interesting about Him + Her, though, is the way Breitz shapes each installation around each actor’s contemporary role as a therapist. Much of Her puts Meryl Streep in dialogue with Dr. Lisa Metzger from Prime, who offers advice on love and marriage, while Jack Nicholson’s Dr. Buddy Rydell assumes a surprising amount of screentime as he instructs the Jacks on anger management. There’s something therapeutic in talking about these gender roles!

Him + Her contains scant images of Streep and Nicholson’s work together, as a dance or two from their partnership in Heartburn offers a fleeting look at them together. Little if any of Ironweed makes the cut, which is intriguing since Nicholson’s character goes mad in that film while Streep gets a rather thankless role. There’s so much that one could choose from to encompass either career, however, and the images of Him and Her are an absorbing study of the way life represents itself onscreen.

Candice Breitz’s Him and Her screens at the National Gallery until September 30th.

How did you experience it?