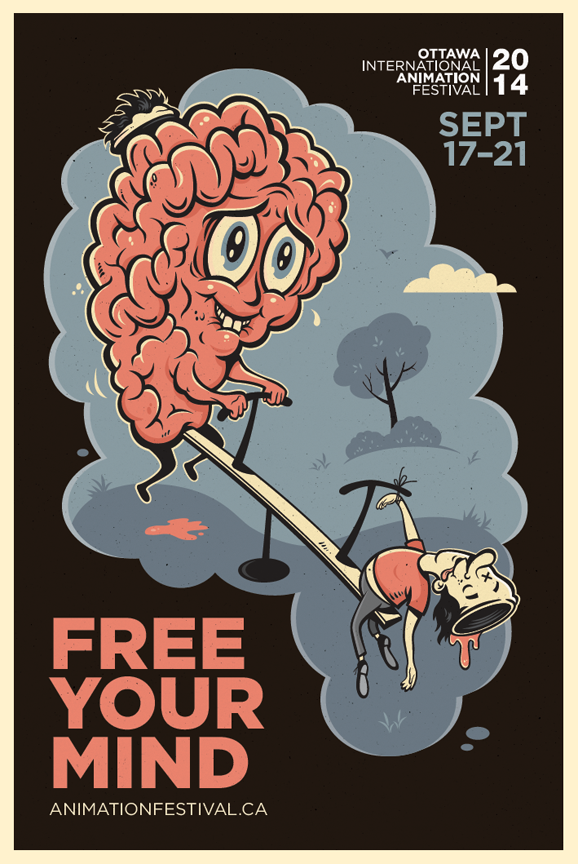 The Ottawa International Animation Festival (OIAF) announced today the line-up for the 2014 festival. In addition to the five features announced previously, the programme for OIAF ’14 has a healthy list of films that range from local to global. Two filmmakers will rep Ottawa’s animation scene amongst the competition. Mike Geiger’s film On the Subway is slated for a World Premiere in the Canadian Showcase while recent Algonquin College Grad Dougall Dawson’s The Pug appears in the Canadian Student Showcase. OIAF Artistic Director Chris Robinson noted the strength of Ottawa animation in the festival’s release, saying, “Whether we’re talking about Norman McLaren’s masterpiece, Neighbours (made in Rockcliffe Park) or John Kricfalusi’s ground breaking TV series, Ren and Stimpy (whose roots go back to his days at Brookfield High School), Ottawa’s animation history is long and diverse. It’s refreshing – and not all that surprising - to see contemporary local animators carrying forward this rich tradition.”

Moving from Ottawa to the Canadian front, Canuck films are well represented among the 110 competition titles and 71 showcase titles selected for the festival. The National Film Board of Canada has an impressive eight shorts among the line-up, including international co-productions with Latvia (Rainy Days), Estonia (Pilots on the Way Home), and Norway (Me and My Moulton). The Canuck contingent also includes new works from Nicolas Brault (Corps d’étrangers),  Steven Woloshen (1000 Plateaus [2004-2014]), and Dominic-Étienne Simard (Le sapin d’Éloïse / Éloïse’s Fir Tree). Simard returns to the festival after her 2012 OIAF selection Paula won the Canadian Screen Award for Best Animated Film.

The international scope of the festival, other the other hand, ranges to 24 countries across programmes of narrative, experimental, and promotional shorts. Schools showcased in the festival come from Israel (Bezalel Academy of Art and Design), Japan (Tokyo Univeristy for the Arts), France (Ecole des Métiers du Cinéma d'Animation), and America (Rhode Island School of Design), which ensures that OIAF 2014 has an exciting mix of new and seasoned talent. Get ready for a colourful trip around the world!

Please visit the OIAF website for the full list of films selected for the festival.
The 2014 Ottawa International Animation Festival runs September 17-21.