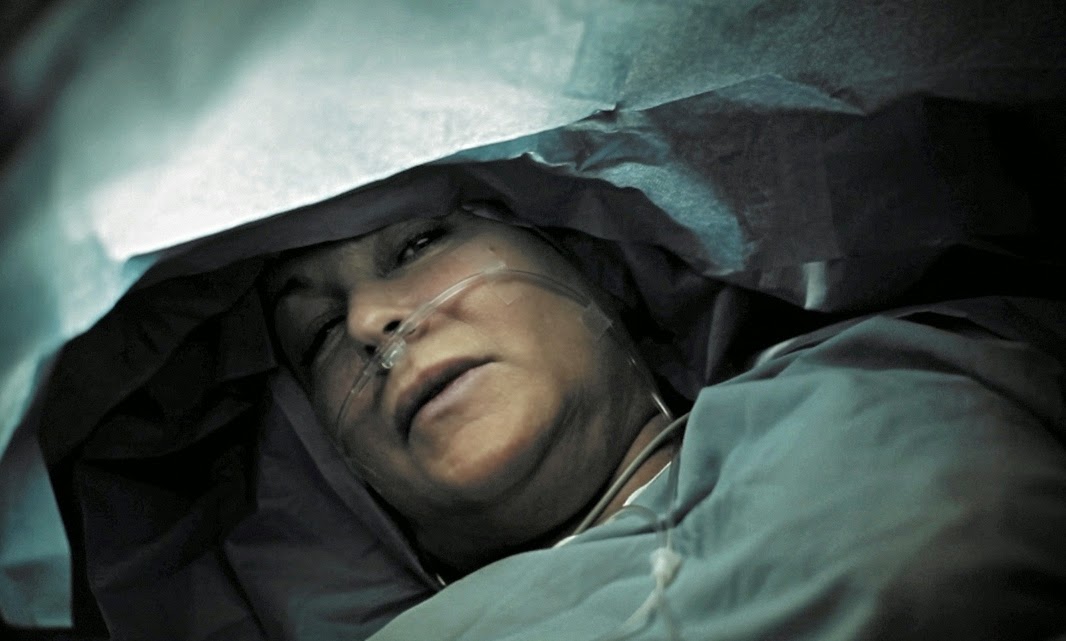 “The ultimate creator is the human brain and God is but one of his creations,” says Thomas (Hans Piesbergen) while recalling the mind-bending beauty of the Sistine Chapel in Triptych. Triptych, the latest film from Robert Lepage, is a brilliant meeting of artistic minds. Look only to the beautiful sequence in which Thomas, a brain surgeon, gazes up at the artistry of the Chapel’s ceiling and visualizes the image of a brain outlining the heavenly bodies of the paintwork. To conceptualize and to theorize art is to bring it to life, and to give life to oneself in the process. Triptych, needless to say, is a richly involving film.


There are significant brains behind this artistic endeavour, and the inspiring scope of Lepage’s adaptation is impressive. The filmmaker/dramatist adapts his own nine-hour epic stage production Lipsynch into this ninety-odd minute film made in collaboration with co-director Pedro Pires. The result is an evocative treatise on art, memory, and identity. If Lepage’s Possible Worlds is a wonderfully cerebral stage-to-screen affair, then the über-brainy Triptych is in a league of its own as it fuses both hemispheres of the mind as only an artist could. The film is a brilliant thesis on the way people self-identify through art, yet for all its intimidating braininess, Triptych is strikingly accessible.

The film takes a three-pronged chorus as it presents three chapters, acts, or movements, depending on the sweeping artistic structure with which one frames the film. Triptych presents the stories of a poet named Marie (Frédérike Bédard), her sister Michelle (a superb Lisa Castonguay), and Michelle’s future husband Thomas. Each of the three characters is an artist in his or her own right, for Marie is a poet, Michelle a singer and voice actress, and Thomas a virtuoso in the operating room and an avid aficionado of fine art.

Triptych provocatively plays with these three art forms as each act sees the three virtuosos grapple with their brains’ ability to fulfill their art. Marie, a schizophrenic, loses the poet’s ability to put feelings into words as bottles of prescription medication numb the sensations that transforms her feelings into poetry. Meanwhile, Thomas experiences increasing tremors that shake the smooth dexterity of his handiwork in the operating room. Michelle, finally and most strikingly, suffers from a brain tumor that allows her to vocalize music but unable to conceptualize or verbalize language itself. What is a poet without feeling? What use is a painter without steady hands? What meaning exists in a song without words?

The three act structure of Triptych identifies each of the three characters with their unique form of art—poetry, painting, and music—but each third of the film dabbles in theatre and sees itself brought to life by film. Marie’s act, for example, juxtaposes fun poetry jams with self-mutilating madness. The gradual loss of words in her story descends into physical, if not visceral, expressions of pain and suffering that she can no longer put into words. Her despair is provocatively rendered in the blood that drips from her wrists onto the snazzy notebooks that Michelle buys, but Marie insists she cannot stain with her tainted mind. Michelle, on the other hand, performs some soulful jazz numbers—a highlight of the film that is so beautiful one forgets that it actually appears in Thomas’s story. Her powerful uses of cadence and inflection, however, are then struck out as Thomas picks at her brain with his unsteady hands and she gradually loses her grasp of language. Triptych uses the intimacy of tight cinematic space to get into the minds of the characters as they see the outlet for their creative talents stripped away by the mere malfunctioning of their brains.

The absence of language runs as a thread throughout Triptych as Lepage and Pires punctuate the movements with markedly theatrical briefs in which the characters absorb themselves in silent tableaux. Marie helps a passersby chat in the blustery wind while Michelle examines film and cameras on the other side of a foggy window. The most explicitly theatrical sequence appears in Thomas’s segment, roughly around the midpoint of the film, in which he inserts himself into an artistic rendering of Christ’s encounter with the doubting Thomas. Thomas, the doctors, jabs his finger into Christ’s wounds as he struggles with his loss of the ability to heal wounds. The stagy lighting of the sequence complements the chiaroscuro painting. One art form seeps into the other, and the movements and variations of Triptych culminate in a beautiful ode to the malleability, virtuosity, and eternality of art.

Each of the stagy interludes situates them as characters in an urban opus or as performers in a city symphony in which one is both a lover of art and an agent of it. Triptych uses the urban space of Montreal and London to realize both the creative freedom of using artistic expression to stand out from the metropolitan crowd and the suffocating madness that ensues when one loses one’s creative genius and feels a kind of annihilation by blurring in with the crowd.

The questions Triptych provokes are arrestingly intellectual and existential meditations on the way art both defines individuals and provides an outlet for the soul. (There’s an unmistakable spirituality to Triptych even if it puts the brain before any one higher power.) The variations of the film culminate as words, poetry, sound, and silence all play roles in one special project as Michelle strives to find her voice through film. The film’s late sequences see Michelle throw herself into several ADR sessions as she tries to insert her father’s voice onto old silent family films. The archive becomes art; the art becomes life. The manipulation of film and technology, aided by a healthy flash of creative genius, helps raise a ghost from the dead as Michelle finds her voice again. It’s a work of art.

Did you see Triptych?

What did you think of Lepage's latest?