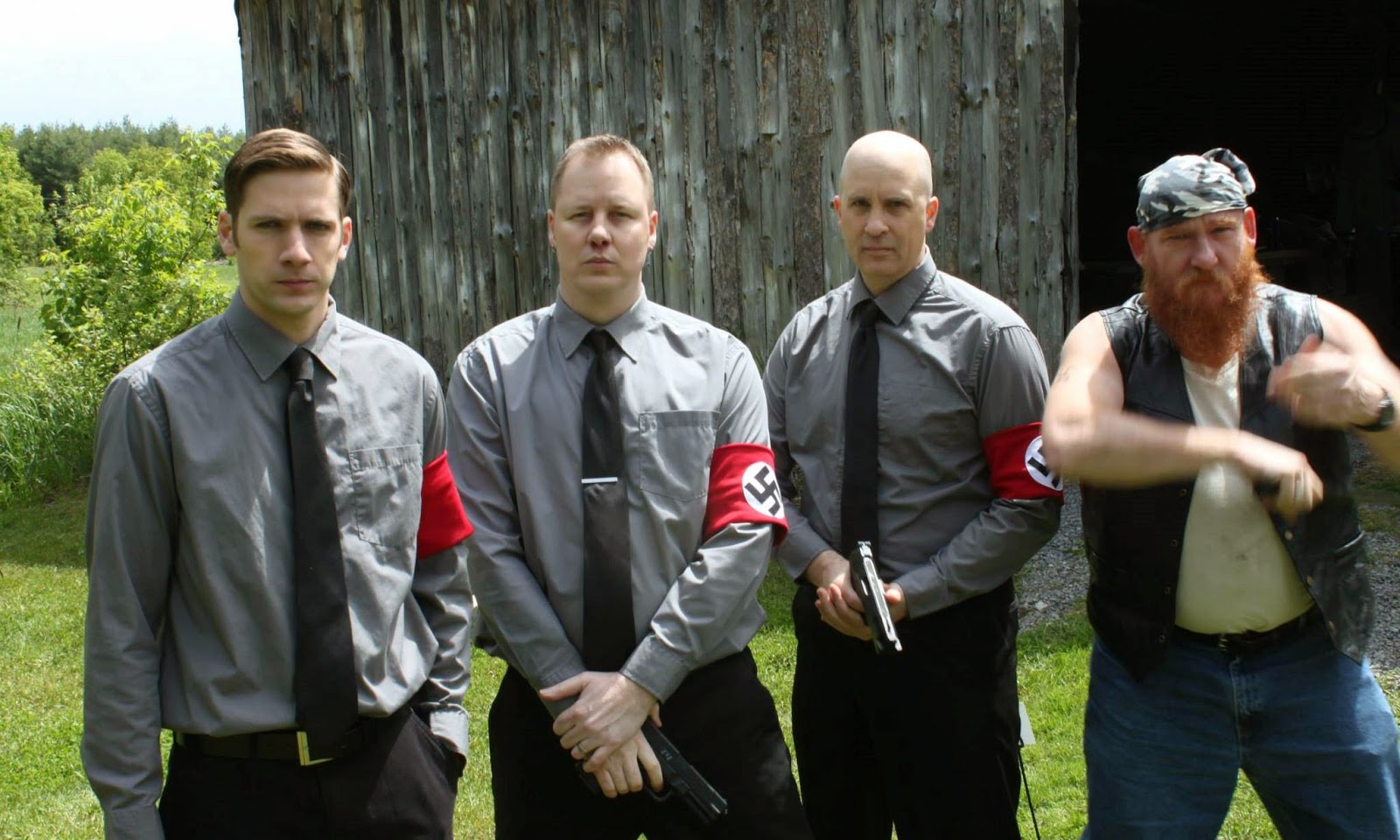 No, it’s not the Harper government reigning in a new era of fascism in the new Ottawa flick Scarecrow Club by Ric Groen. It’s the good old-fashioned Nazis, ideological descendants of Hitler, who win a surprise victory in the Ontario provincial election. Democracy uproots itself as Canucks across the country are thrown into a titter as unfathomable Canadian flags are raised with a swastika branded smack in the centre of the maple leaf. Oh, Canada—whatever will we do?

Democracy still exists in Ontario, though, for a recent post in the Ottawa Filmmakers Facebook group includes a lively discussion among members of the local film scene. Unlike the Riefenstahl-era national cinema of propaganda, the post asks users to observe recurrent weakness in Ottawa feature films. The responses generally cite writing as a key weakness and a need for honest feedback. The post, for better or for worse, anticipates Scarecrow Club, for which this Ottawa film fan faults the writing as its biggest failing. Scarecrow Club includes the abundance of enthusiasm that’s always on display in the Ottawa film scene, but it also continues many of the observations noted by Ottawa filmmakers themselves. It’s not the kind of film with which Goebbels would rally the troops.

Scarecrow Club, ambitious as it is for a local production with a modest budget of $10 000, struggles to exceed the novelty in seeing the National Capital represent itself in a political thriller. It’s a political thriller that never really thrills, and the political angle merely cloaks it in a flimsy allegory of present-day fascism. (Ottawans looking for more entertaining novelty might best seek out the Ottawa-shot 1948 red scare thriller The Iron Curtain, which pits Dana Andrews and Gene Tierney in a political brouhaha amongst the “quaint people” of snowy Ottawa.) Scarecrow Club, however, suffers from a recurring weakness in the writing that never fleshes out any of the characters or political resonance, nor does it really provide any conflict with its relatively flat story arc.

The threat of an Ontario besieged by National Socialism develops only in a quick sound bite by the party leader (Jurgen Vollrath, who resembles Jean Chretien enough to add some amusement) and an unintelligible flashback to Nazi-occupied France. Some half-serious and/or unintentionally funny news snippets follow at Parliament Hill (rather than at Queen’s Park…) to announce the surprise results of the provincial election. Cut to the film’s anti-Nazi hero, Mason (an impressive Brennan Martin) as he gripes about the election outcome to his girlfriend Sarah (Faye Rowland, also strong) and the political backdrop of Scarecrow Club gets lost in scattered exposition.

A few conversations reveal the fears of seeing the Nazis continue, but Scarecrow Club relies on the inherent fear/offensiveness of the word “Nazi” to substitute for any substantial engagement with politics past or present. It’s a #Nazis/Wikipedia-penned political allegory, and there’s nothing tangible in the underdeveloped script to make the premise of a backwards-looking Ontario engaging. Some more attention to the ideological underpinings of the Nazi threat might make Scarecrow Club more urgent and resonant, and add some heft to the final twist that seals Mason's fate.

The thrills aren’t much better served, for Mason and Sarah’s fight to eliminate the Nazis mostly plays out in a series of conversations. They have heated arguments with Nazis, they have polite discussions with an underground Nazi opposition, and the Nazis themselves have some equally reserved chats. Nothing really happens in this talky thriller. The dialogue-heavy nature of Scarecrow Club isn’t helped by the underdeveloped and cliché-heavy banter, which itself receives some stilted delivery from a mixed cast.

Scarecrow Club features a who’s who of Ottawa film challenge regulars in its ensemble, and some of them make the transition to feature film more capably than others do. It’s clear that Martin and Rowland will move on to better things, as could Vincent Valentino who plays one of Mason’s Nazi foes, but the range of skills in the cast adds to the overall unevenness of the production. The lack of direction and depth actually hinders Scarecrow Club when it aims to take the material higher. A heartrending monologue by Sarah, for example, gives Rowland a meaty monologue as she tearfully builds the character’s tragic backstory, but the speech comes out of nowhere and Groen holds the speech for so long that the sheer randomness of its appearance undercuts its effect.

The enthusiasm is clearly there, yet some actors play the material for laughs when utter seriousness might better serve Scarecrow Club. Actors flub lines throughout the film (including Groen himself during a conversation shot in the offices of Invest Ottawa). One of the guffaws even sees an actor drop the line “They have plans that make Ow-schwitz look like a playground” to which an audience member gamely replied, “Auschwitz!” to correct the comical mispronunciation. Scarecrow Club builds a series of laughs from the audience that vary depending on the perceived intentionality of the guffaws. Poor audio, even for the work print in which Scarecrow Club screened, muffles dialogue as frequently as polite moviegoers might muffle their laughs.

Scarecrow Club might ultimately be another example of a micro-budget film whose scope exceeds its reach. It might be too sprawling a genre pic to be adequately realized using the tools at its disposal. Nothing is impossible in independent Canadian cinema these days, though, as evidence by the strength of modestly-made Canuck pics like The Animal Project or $1000 features like Mourning has Broken, which show how independent filmmakers can succeed on a shoestring with proper care and innovative resourcefulness.

There is, however, a difference in scale between those films and something like Scarecrow Club. The ambitions of this local production might simply be too great for the size of its potential; alternatively, the pics by Ingrid Veninger and the Butler Brothers smartly use economies of scale (as do the recent works of Terry Miles, if one wants another contemporary example) to find a form and an energy that uses the practical scope of the production to its greater effect. Make a film for a thousand dollars, rather than use a thousand dollars to make any film; or centre a film on one solid actor who can carry the drama himself versus corralling friends and family into a communal ensemble. The intimacy of their execution is part of the appeal. A similar independent spirit might be the answer Ottawa needs to take the enthusiasm to the next level.

Scarecrow Club screened in Ottawa at The Mayfair on July 10.