'Lucy' is a Brain Fart 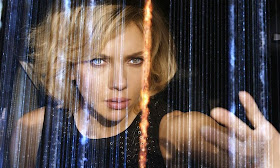 Scientists say that humans use only ten percent of the brain's cerebral capacity. Science fiction writers, on the other hand, wonder what happens when humans maximize their intellectual potential. The result is a freak show that could never happen in real life. Be thankful for that.


The aforementioned experiment happens in Luc Besson’s hyperactive Lucy when the title character, played by a smoldering Scarlett Johansson, is coerced into becoming a drug mule. Smuggling some high-powered drugs that have the potential to unlock all the powers of the mind, Lucy ingests a hefty dose of the blue magic when one of her captors gives her a swift kick to the gut. The drug is exhilarating and Lucy evolves from being a slinky blonde with seven-percent brain activity to a superhuman wonder-woman/intellectual—the complete package!

Johansson adds to her string of recent knockout performances with her sultry butt-kicking turn as Lucy. The film tasks her with hooking the viewer and helping them take the bait of a highly convoluted scenario, for Lucy moves at breakneck speed as Lucy moves up the food chain. The first act of the film features some of Johansson's best work as she plays Lucy as a scattered woman driven by impulse and emotion. Once the drugs kick in, however, Johansson cranks into Under the Skin mode and becomes a placid, yet wildly intense brainiac renegade.

It’s a shame, though, that Lucy becomes stupider the more Lucy becomes smarter. This OCD action flick isn’t worth the character that bears its name. Johansson’s powerhouse performance makes Lucy a compelling antihero who invests the audience in a scenario enough to compensate for a renegade screenplay that spirals out of control faster than Lucy throws a punch.

Director Luc Besson (The Professional, The Lady) assembles a glossy actioner and delivers a unique film that has the bombast of a Hollywood blowout and the chicness of an art house experiment. Lucy gloriously takes style into overdrive… but the philosophy behind the film is utter nonsense. Not even Morgan Freeman can make Lucy sound like anything beyond pointless speculation. It doesn’t help, either, that Lucy’s evolutions stretch too far into fantastical realms to maintain a pretense for realism that might help Lucy reach greater implications. The cop-out/nonsensical ending ironically caps the whole thing off with a total brain fart when Lucy supposedly hits her cerebral peak. Thankfully ScarJo performs at 100%!

Lucy is now playing in theatres.

What did you think of Lucy?