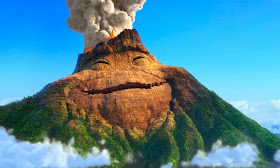 Audiences at the Ottawa International Animation Festival received an exciting sneak peek on Friday night when the upcoming Pixar short Lava screened before the feature presentation of the NFB’s Seth’s Dominion*. A warm mahalo! goes out to the folks at Pixar and the OIAF for including this exclusive treat, for Lava is a charmer.

This endearing little love ballad of a film by James Murphy is an irresistible hymn to the romantic beauty of the Hawaiian Islands as one volcano sings to the sky in hopes of finding someone to love. (The film puns “love” and “lava” nicely.) Murphy, who serenaded OIAF audiences with a ukulele at the film’s screening, scripts the entire film as a song as the volcano shares his soul with the sky and coaxes a mate from the sea. The bouncy song is endlessly clever as Lava pays homage to love and nature. The film is at turns amusing and affectionate as Murphy lets the sturdy volcano erupt with soothing vocals.

Lava features more of the striking 3D animation for which Pixar is a pioneer as Murphy offers fantastic visuals to complement and drive the mellow ballad. The film is especially outstanding for the titular lava for the film, for Murphy and his team of animators create impressive flames and molten rocks underneath the waters of the ocean. The texture and clarity of the images are very, very impressive, especially the transparency of the clouds atop the bright tropical pallet and streams of light. Kids will marvel at the giant volcano with the big smiley face, but parents and animation fans will be even more dazzled by the overall originality and artistry of the film. Lava is a cute little hymn to Hawaii and a lovely addition to this year’s festival.

Lava screens with the feature film Inside Out, which opens in theatres 19 June 2015.
Please visit www.animationfestival.ca for more info on this year's festival.

*A review of Seth’s Dominion will be published at Point of View.