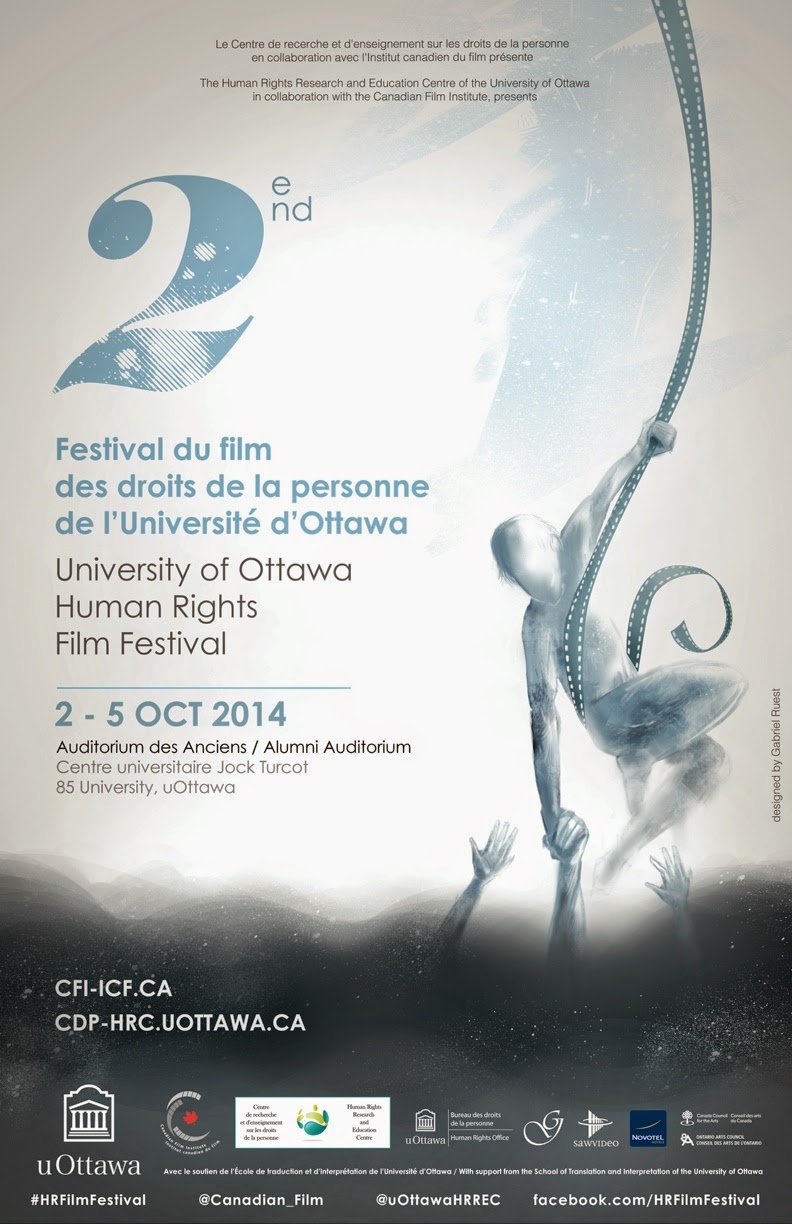 Ottawa filmgoers are enjoying so many film festivals these days that they might confuse the National Capital with Toronto. All these unique screenings are very exciting as new festivals appear amongst the granddaddies of Ottawa film such as the recent Animation Festival. Next weekend, October 2 to 5, marks the second edition of the University of Ottawa Human Rights Film Festival after a successful launch last year. (Keep reading if you want to win free tickets!)


The festival, organized by the Human Rights Research and Education Centre of the University of Ottawa in collaboration with the Canadian Film Institute, returns with a mix of Canadian and international films. This year’s uOHRFF invites local film fans to engage with a variety of urgent issues through compelling screenings and enlightening post-screening discussions. The festival features human rights issues such as feminism in the festival’s opening night film The Supreme Price, mental illness and memory loss in El Huaso, and the trauma of war crimes in For Those who Can Tell No Tells.
The festival also includes one of my favourite films of last year, Louise Archambault’s Gabrielle, which received my pick for the best Canadian film of 2013. (It also repped Canada at the Oscars and won two Canadian Screen Awards including Best Film, if you want some second opinions!) Seeing Gabrielle in the context of a human rights film festival invites audiences to engage with the core of the film—the rights of the developmentally challenged—as Gabrielle (Gabrielle Marion-Rivard) experiences love on her own terms and defies her caregivers by exploring a fruitful relationship with fellow choir member, Antoine (Alexandre Landry in one of the breakout performances of Canadian film last year). It’s hard to imagine a more infectiously likable film than Gabrielle at the festival, so Ottawa filmgoers best not miss their last chance to see it on the big screen.

Screening this year at the University of Ottawa Human Rights Film Festival are:

2 Oct 2014, 7:00 pm
Dir. Joanna Lipper | USA, Nigeria | 2013 | 75 min | English
Synopsis: Following the annulment of her father's victory in Nigeria's Presidential Election and her mother's assassination by agents of the military dictatorship, Hafsat Abiola faces the challenge of transforming a corrupt culture of governance into a democracy capable of serving Nigeria's most marginalized population: women.
-Professor Pius Adesanmi of Carleton Univeristy will lead a post-screening discussion.

3 Oct. 2014, 4:00 pm
Dir. Louise Archambault | Canada | 2013 | 108 min | French, with English sub-titles
Synopsis: Gabrielle is a young woman with Williams Syndrome who has a contagious joie de vivre and an exceptional gift for music. Since she met her boyfriend Martin at the community center where they are both choir members, the two have been inseparable. However, because they are “different” their loved ones are fearful of the relationship. As the choir is preparing for an important music festival, Gabrielle does everything she can do earn her independence. But despite her determination, Gabrielle must still confront the prejudices of others as well as her own limitations in the hope of experiencing real, even extraordinary, love with Martin.
-Review: “an irresistibly heartwarming and soul-stirring story.”
-Top 10 Canadian Films of 2013: #1
-Canadian Screen Award winner: Best Film and Best Actress (Gabrielle Marion-Rivard)
-Sonya Nigam, Director of the uOttawa Human Rights Office, will lead a post-sceening discussion.

4 Oct 2014, 4:00 pm
Dir. Carlo Guillermo Proto | Canada, Chile | 2012 | 78 min | Spanish and English, with English and French subtitles
Synopsis: Struggling with short-term memory loss, Gustavo has retired from his business and finds some solace in his homeland of Chile by pursuing a childhood dream - competing as a "huaso" in rodeos. Awaiting the results of tests to determine whether he has Alzheimer's, and having long professed he would end his life if it became unbearable, he begins making preparations for his death, while his family struggles to accept his decision to end his life. El Huaso explores the pivotal point in one man's life where he takes it upon himself to shape his own mortality.
-Director Carlo Guillermo Proto and Dr. Simon Hatcher of uOttawa will lead a post-screening discussion.

I Am a Girl

5 Oct 2014, 4:00 pm
Dir. Rebecca Barry | Australia | 2013 | 98 min | Khmer, French, Ewondo, Farsi, Tok Pisin, and English, with English and French sub-titles
Synopsis: In I am a Girl, we meet 14-year-old Kimsey from Cambodia, forced to sell her virginity at 12; Aziza from Afghanistan, who will be shot if she goes to school; Breani, a teen living in a ghetto of NYC and dreaming of stardom; Katie from Australia, who is recovering from a suicide attempt; Habiba from Cameroon, betrothed to a man 20 years her senior; and Manu from Papua New Guinea, about to become a mother at 14 following her first sexual encounter. As they come of age in the way their culture dictates, we see remarkable heart-warming stories of resilience, bravery and humor.
-Special guest TBA.

Admission for all film screenings is $10 for the general public and $5 for Full time students and CFI members. Festival passes are also available for $40 (general) and $20 (students/CFI members).
All film screenings take place at the Alumni Auditorium in the Jock Turcot University Centre, 85 University St. at uOttawa.

Do you want to win tickets to the uOHRFF opening night film The Supreme Price? If so, you are in luck! Thanks to the Canadian Film Institute, we have two (2) pairs of tickets to give away to The Supreme Price. All you have to do to enter is answer the following question:

What classic film opened the inaugural edition of the University of Ottawa Human Rights Film Festival last year?
a) All the President’s Men
b) Rome, Open City
c) Missing
d) The Killing Fields

Send your answer and full mailing address to contests@cinemablographer.com with the subject “Human Rights.”
(One email entry per person, please.)
Bonus entries go to anyone who likes/shares the line-up on Facebook and/or Twitter!