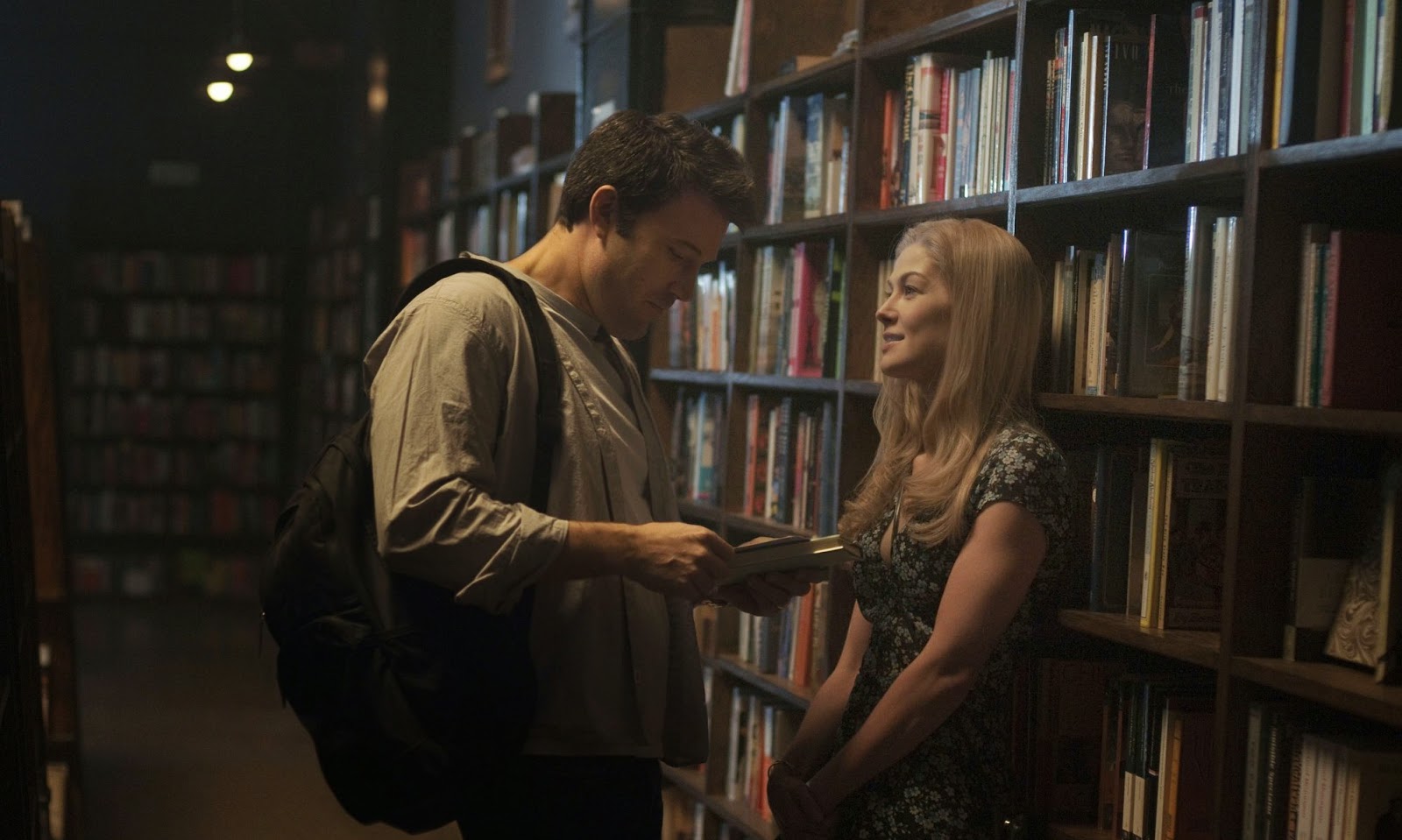 The adaptation of Gone Girl employs near clinical fidelity to its source material, yet one feels like an adulterer watching the delicious drama unfold onscreen. The book by Gillian Flynn inspires me to be on Amy’s side of the affair for every page of the novel from beginning to end, yet the film by David Fincher puts me on Team Nick for every frame of the movie from open to close. Gillian Flynn writes both versions and they’re nearly identical in terms of words, story and structure, so this adaptation poses a fascination re-reading by the film author that draws out all the social resonance embedded within Flynn’s texts. This wicked thriller by David Fincher is one of his best films yet.

Gone Girl matches the swift pace of Flynn’s novel as she and Fincher transform the tumultuous marriage of Nick and Amy Dunne (a spectacularly cast Ben Affleck and Rosamund Pike) into the cinematic equivalent of a page-turner. (Might binge watching be the closest analogy?) Quick cuts—extremely quick—introduce the viewer to the idyll suburb in which the Dunne’s now reside. It’s an assault of beige banality as Gone Girl presents the Dunnes following an unnerving frame in which Nick muses about bashing Amy’s beautiful head in so that he can discover what is going on inside her mind. One never knows what actually goes on in someone’s head, as Gone Girl quickly shows when, in a matter of moments, Nick’s cosy world turns upside down when Amy goes missing and their home becomes a violent crime scene.

The film follows the he-said/she-said structure of the novel as Nick’s narrative begins on their fifth anniversary, aka the day of Amy’s disappearance, and becomes both a witness and then the obvious suspect of a potential homicide. Amy’s narrative, on the other hand, starts at the beginning of their relationship as Amy details their courtship in fun, excited diary entries that recall minute details of the romance with glee. Each storyline introduces fissures in a relationship that grow wider and wider with each of the fades that mark the ruptures in the timeframe. Gone Girl essential offers hateship, friendship, courtship, loveship, marriage, and then more hateship. I.e. it’s love, Fincher style. If Alice Munro captures the realism of small town Ontario, then Fincher and Flynn create one of the most unnerving portraits of suburbia this side of Todd Haynes’s Safe.

There is not an ounce of love or emotion in this tragic satire as both Nick and Amy witness a marriage burning out. The signature coldness of the Fincher canon works to great effect as his direction gives Gone Girl a heart of galvanized steel. The coolly energetic score by Trent Reznor and Atticus Ross brings out the hypnotic darkness of the tale. The frigid, sharp, yet entrancing cinematography by Jeff Cronenweth makes Gone Girl a deep focus masterwork as the meticulously composed portraits of the Dunnes’ rise and fall creates a constant air of unease—as does the masterful editing by Kirk Baxter—that accentuates the loveless void of their marriage.

The casting of both Pike and Affleck is as perfect as one can hope for as each of the leads embodies both the seeming normalcy of the Dunnes and the ordinary awfulness that makes them so utterly beguiling. Affleck gives one of his strongest performances playing up his all-American charm with which Flynn characterizes the hero/fall boy of Gone Girl. Nick draws on the boyishness and self-deprecating charm of Affleck’s persona to draw the audience onto his side, but the role also calls for the edge of cockiness in Affleck’s charisma to skew the audience’s perception of whether Nick has the capacity for murder. The film also uses the “slightly villainous” character, as Amy puts it, of Affleck’s prominent bum chin as a running gag that Nick may or may not be all that he appears.

If Gone Girl succeeds with casting Affleck as Nick, it scores even higher with the spot-on choice of Rosamund Pike as Amy. Pike, who has previously played the wife role to heartbreaking effect in Barney’s Version (which is still my favourite of her performances), takes her biggest role yet and gives a truly star-making performance. She’s poised and fetching in the flashback scenes that introduce Amy as a well-to-do New York intellectual with infectious joie de vivre and energy. She’s a bit chilly, too, as any girl might be after her parents fictionalized her childhood in a series of Amazing Amy books that always put her alter ego one step ahead of the real Amy.

Amy clearly has issues, both threads of Gone Girl tell the audience, but Pike makes fewer demands for sympathy with Amy than Flynn does in her book even as she expertly creates a women who descends into Stepford-y frigidness and self-righteousness, and then unravels ferociously as her reflections note her suspicions that Nick aims to kill her. Pike invites, if not demands, the audience to judge Amy. The “Amazing” is all a façade, as is the marriage, and Pike chillingly channels the bipolar personas Amy juggles as she fastidiously navigates the parts that both she and others create for her to play.

What makes Gone Girl such an utterly fascination adaptation, however, is how markedly one’s relationships with Nick and Amy differ so greatly in either form. The book seems to favour Amy as the prose puts her story in the past tense, structuring her as a tragic heroine, and draws out the disappointment she feels in her marriage as her early entries ring with a vibrancy of life as she recalls their years in New York, and her later entries grow bitter as the cold monotony of suburban living sucks the life from her. The film, on the other hand, changes nary a word of Amy’s mesmerizing voiceover, but one can’t help but sympathize with Ben Affleck’s Nick as he potentially takes the rap like a schmuck. Pike’s complete immersion in her character makes Amy a Molotov cocktail of ego and emotions, for she avoids cornering Amy into the endearing victim of the book who convinces readers so persuasively that Nick is a total bastard. Nick remains a complete shit, as both Flynn and Affleck create him, but he’s a different kind of loser this time around.

It’s largely thanks to the tone and pulse of Fincher’s delivery, as he turns a potboiler into satire—and a thrilling one at that. Perhaps Gone Girl plays so differently on page and on screen comes thanks to the film’s investment in the media saturation of Nick and Amy’s case. Gaggles of TV cameras hound Nick while media-specific scenarios from Flynn’s novel, such as Nick’s stupid selfie and pie-eating grin during the search for Amy, take important points from the novel that bump Nick down a notch and assume more significance in the film as they situate Nick’s downfall within a contemporary media mania. There is often a television on in the background as Nick’s twin Margo (an impressive Carrie Coon) or Amy’s creepy ex-boyfriend (an ingeniously cast Neil Patrick Harris) sits transfixed as they watch TV commentators transform their loved ones before their eyes.

Gone Girl feels especially resonant because the film comes, say, in a post-Woody Allen/Dylan Farrow media landscape where audiences have the immediate experience of seeing a sensational case play itself out almost entirely in the opinions and commentary of third parties. Gone Girl chillingly reminds audiences just how easily uninformed masses can be willingly persuaded by anyone with a platform and an opinion. An informed, fully fleshed out opinion no longer holds as much weight as an instantaneous one when the nature of contemporary news consumption encourages the glance effect, lets readers subsitute sensational headlines for full stories, and uses public perception as the ultimate character reference.

As the film’s central commentator Ellen Abbot (a hilarious Missi Pyle) delivers verdicts using social media impressions as evidence, Gone Girl satirizes how dangerously and quickly opinions can be swayed and solidified in the age of instant news and celebrity. The real death is perhaps not that of Amy Dunne, but that of reason, for it becomes the norm to cast judgement without hearing both sides of the story. (Seeing Ellen Abbott in both timelines of the film draws out her ridiculousness quite effectively.) Her grandstanding also plays into the perception that these quick and sensationalist judgements often polarize complex issues along gender lines, and Gone Girl derives a lot of pleasure in playing both to and against Affleck’s all-American charm. Post-plot-twist Amy also assumes some fanatical edginess as Pike and Fincher compose a chilling character—it looks as if they dilate Pike’s pupils in many shots—who tests the audience’s notion of how much they think they know this woman being composed by various agendas.

Fincher seems more comfortable with the investigatory/thriller narrative than he does the backstory of Gone Girl (although both come to life with expert cunning), as Nick’s story assumes a higher level of urgency as the media firestorm ultimately swings sympathy in his favour. He’s assaulted on all fronts. This sense is especially effective when Nick’s two greatest supports, Margo and Detective Rhonda Boney (Treme’s Kim Dickens—very effective), let the sensationalism of the case sway their opinions of a man they initially believe is innocent. (Mark the point at which Boney moves from fancying to prove Nick innocent to wanting to prove him guilty.) The film nevertheless avoids sharpening the same gendered lines it satirizes, though, because Nick’s verifiable indiscretions are often those that most damningly sink him. They don’t justify murder or the death penalty, but they show that Nick isn’t exactly innocent.

The play on innocence, guilt, and complicity ultimately saves Gone Girl from flying off the rails in its final act as it does in Flynn’s book. The insanely implausible denouement of Gone Girl essentially follows the same script of the source material. The rumours that the adaptation sports a new ending by Flynn herself are thus a big, fat lie. One initially wants to fault Gone Girl for favouring a near-fatal mistake in the source material that the filmmakers themselves acknowledge is flawed, yet Fincher makes it work by reading it with a much different tone.

The adaptation of Gone Girl appropriates the ridiculousness of Flynn’s finale and lets the farfetchedness and inevitable comedy work in its favour. (The audience with whom I saw the film was snickering throughout the last twenty minutes of the film.) Fincher marks the turn with a Cronenberg-level orgy of sex and violence as Gone Girl brings the crazy train back to the scene of the crime and reveals the farce of the Dunne’s marriage. The ending conspicuously draws out the satire as the film lets the veneer of social niceties and normalcies play out as a charade. Shifts in line readings transfer blame and innocence to complicity as the final shots of the Dunnes reveal a couple that truly warrants the death penalty of a cold, soul-crushing life in the suburbs. These people deserve each other.

What did you think of Gone Girl?

How does it compare to the book for you?