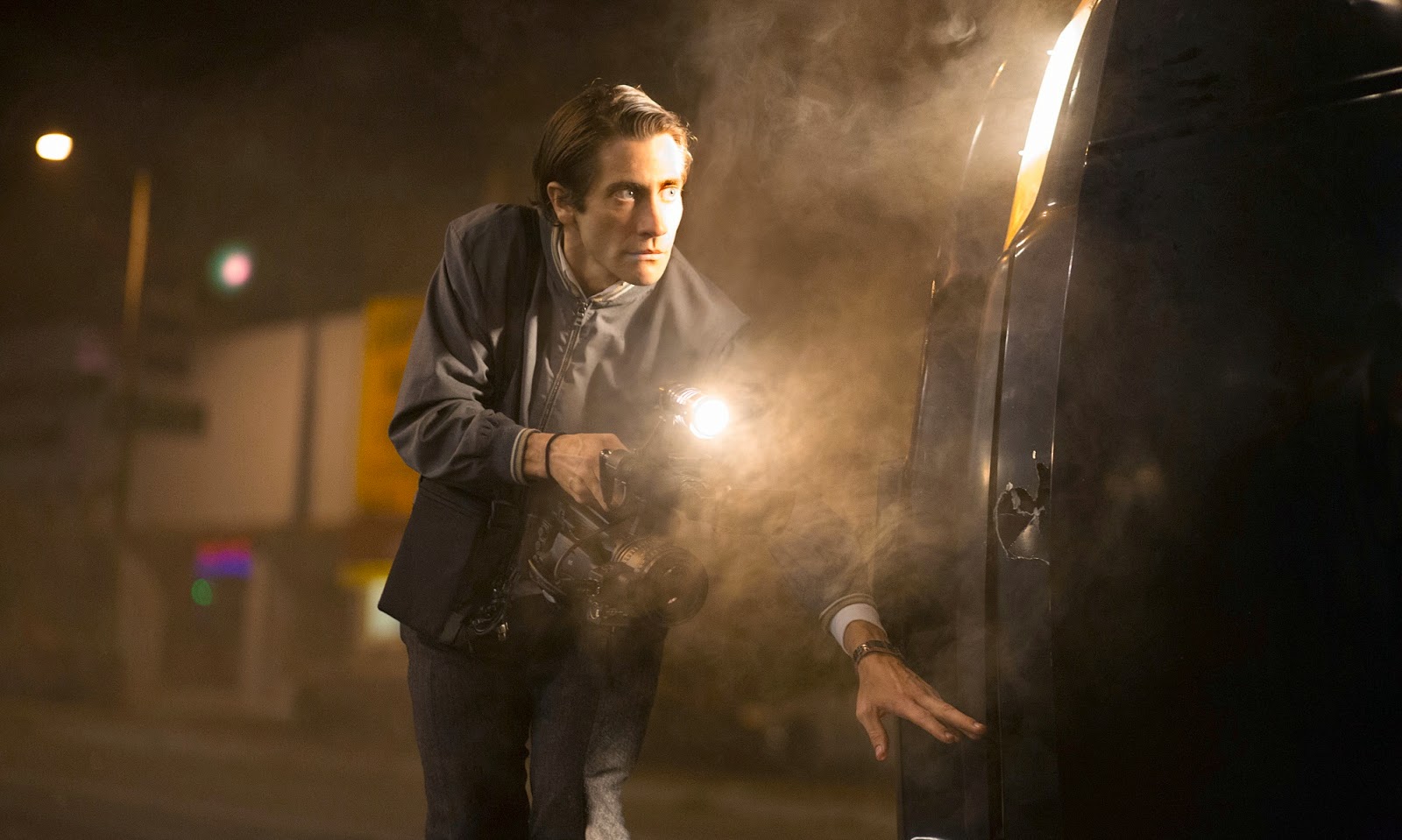 “How much do you want it,” asks Lou Bloom (Jake Gyllenhaal) to Nina (Rene Russo) during a tense encounter in which the slimy freelance videographer negotiates with the TV news producer over a particularly titillating piece of footage. Lou, a petty thief and lowlife who catches a bug for capturing sensational news stories after stumbling upon a fiery car wreck, graduates to the league of news agents known as nightcrawlers who chase ambulances and feed producers like Nina who live by the motto, “If it bleeds, it leads.” Nina, actually, lives by the sensationalist FOX News-era philosophy that pushes hard news to the point of fiction. Her idea of news, she says, is a white woman running and screaming with blood spurting out of a gouge in her throat. Nightcrawler knows how much audiences have a taste for the rough stuff, and it gives them exactly what they want.


This contemporary film noir from writer/director Dan Gilroy, making his directorial debut after penning flicks like Reel Steel and The Bourne Legacy, is an intense and electrifying ride into the night. Lou, wound-up and over-eager, seems ready to explode as he puts his pedal to the metal and drives from one horror show to the next. He goes around applying for jobs with breathless zeal and he rambles empty motivational rhetoric—the kind of vacant nonsense used by start-ups and by self-described ninjas on LinkedIn—as he searches for any means of employment in the empty LA-wasteland. His eagerness to excel in the job is plainly evident in the lines he’s willing to cross to get first-rate footage. Lou not only steps beyond the yellow tape, he gets right in the face of cops, witnesses, and victims—even dead ones—as he invades the privacy of others like a cockroach scurrying through refuse to feed its own appetite.

Lou’s appetite is the audience’s own appetite, though, for the gruesome imagery of Nightcrawler strips back sensationalism and offers something new. The metaphor of slowing down as one approaches a car accident, feeling a mix or horror and perverse excitement, is overused to point of cliché in writing, yet Nightcrawler truly conveys the perverse pleasure in getting an upfront glimpse at gruesome carnage and of feeling so repulsed that one cannot look away. The seediness of Lou’s ambition as palpable, but it’s impossible to avert one’s eyes from a single frame of the film.

Gyllenhaal offers an impressive physical transformation, looking gaunt and sickly, as his formerly robust physique is whittled down to an anemic skeletal frame hidden underneath drab ill-fitting clothes. His performance itself has the wired mania of an over-caffeinated insomniac made edgy by a lack of sleep and too much sugar. Gyllenhaal gives one of the weirdest, strangest, craziest, and strongest performances of the year and he owns every frame of the film as the bug-eyed nightcrawler.

Gilroy matches Gyllenhaal’s maniacal performance with a sinister style. Nightcrawler is almost entirely nocturnal, as the few films that take place in the daytime mostly play out in Lou’s dark rat-hole of an apartment. Outside, however, Gilroy takes a cue from Michael Mann’s Collateral and shoots the streets of LA with a cool grittiness. Cinematographer Robert Elswit shoots a world that exists in the shadows, a hidden nightlife that pulses only with gaudy fluorescents and assaultive flashes made for advertising. The slick, if sickly, nightvision of Nightcrawler accentuates the bravura zaniness of Gyllenhaal’s performance by making his eyes, especially his pupils, look extra crazy as Gilroy and Elswit frequently reflect sharp bullets of light off Gyllenhaal’s wide eyes. He looks like rat, or even a bloodshot vampire.

Lou’s after blood and there’s no doubt about it as he consumes the system that feeds off his perverse video footage. He takes a homeless, jobless upstart named Rick (Riz Ahmed) to accompany him as he chases the police banner in search of the next story. Rick, like Lou, is another product of a system that is thirsty for opportunity, as Lou’s hilarious job pitch/interview, which feels aberrantly realistic in the age of unpaid internships and sketchy start-ups, makes unhealthy demands and turns the needy into pawns. Lou says he wouldn’t ask any of his underlings to do something that he himself would not, but as Nightcrawler cuts into the underbelly of LA in a digital media age, the line between what is ethical and what is not becomes as fine as the border between two pixels.

Feeding Lou’s appetite, and eventually falling victim to it, is the aggressive headline hungry Nina. Russo is terrific as the desperate producer in a welcome and feisty comeback. There’s a delicious hint of Faye Dunaway in Russo’s performance as the demands of the job become fanatical and Nina experiences a high like a shark sniffing blood. Nightcrawler feels like the Network of the digital age in which moral codes and privacy lines are virtually obsolete. Anyone can film a murder and upload it to the Internet these days and contemporary history, like the case of Luka Magnotta, shows that current audiences will consume the most depraved footage available. The ugliness of Nightcrawler’s satire is revoltingly real.

This devilish contemporary noir, saturated in media and verbosely in your face, is an intense and atmospheric thriller. The film lets Gyllenhaal come out of hiding in one of his best performances yet. The dark, gripping Nightcrawler is one of 2014’s best: You’ll want it, and you’ll want it bad!

Nightcrawler is now in theatres from Elevation Pictures.

What did you think of Nightcrawler?