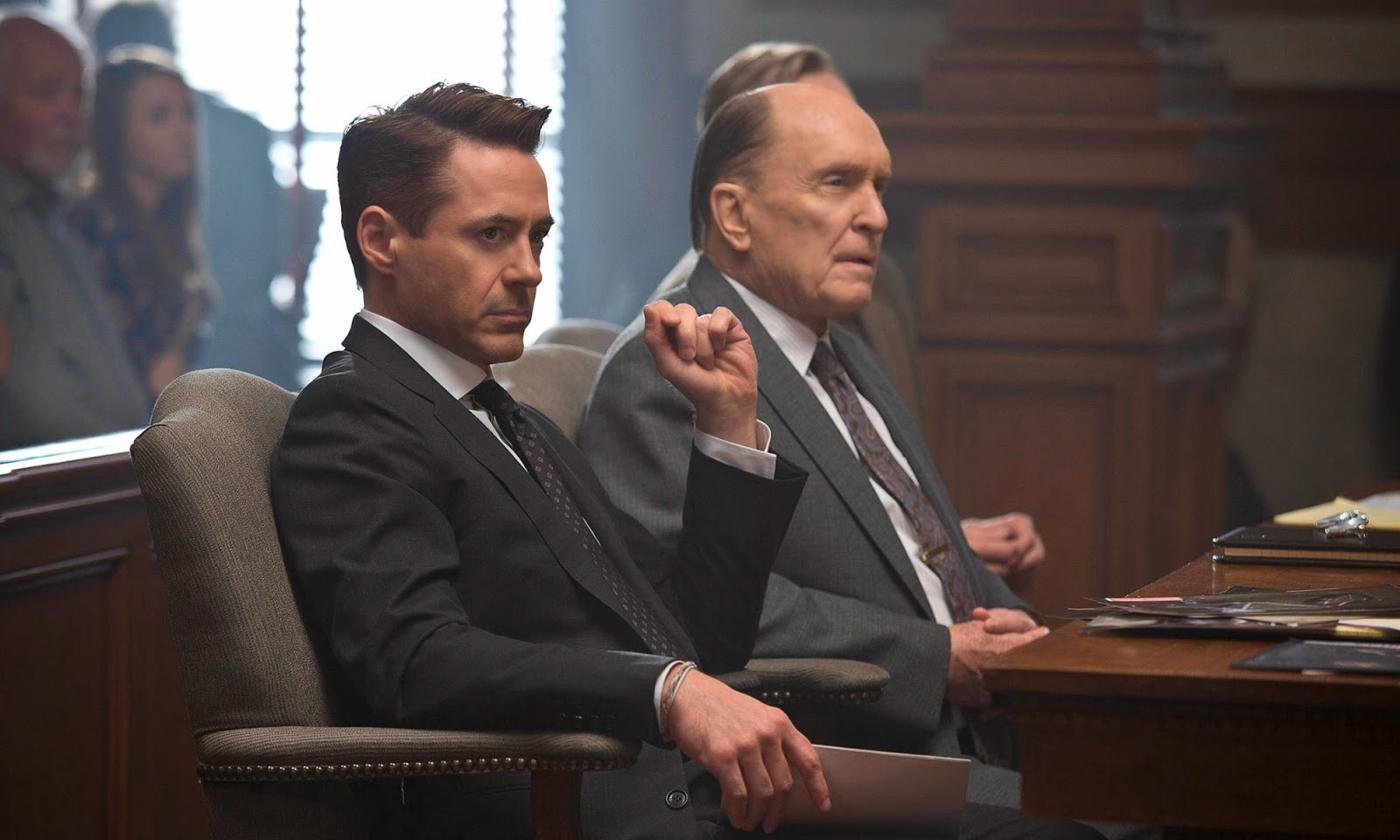 How many high stakes courtroom flicks plead ‘no contest’? The legal plea lets a defendant play it safe by neither admitting to charges nor fighting them. It saves a potentially dramatic episode of legal proceedings as one avoids disputing one’s guilt. It’s dignified, I guess, if the potentially guilty party has nothing to prove.


The Judge is a bona fide nolo contendre of the fall film season, as this legal drama plays it safe. The film neither gains nor loses during its systematic plea. It’s a one-note affair, and exactly like its trailer except ten times longer. This drama by David Dobkin (Wedding Crashers) offers nothing more and nothing less than one expects to see while walking into the theatre.

The film resembles August: Osage County, but it has a lot more testosterone and far less balls as Robert Downey Jr.’s Hank Palmer returns home to his cranky dad, Joseph (Robert Duvall), to join the family in burying their mother. Hank, a slick big city lawyer, and Joseph, a crusty small town judge, clash like old nemeses from courtroom TV as their grudges and values divide them. They bury mom, Hank says good-bye to his brothers (Vincent D’Onofrio and an unwatchable Jeremy Strong), and he leaves without looking back.

Then, in a Godfather III-ish moment, the family pulls Hank back in just when he thought he was out. The judge faces charges for a potential vehicular homicide that he can’t seem to remember, and the family needs the renegade son to hold court for their father.

The Judge lays a decent case that formulaic studio dramas remain perfectly serviceable as the family law episode between Hank and Joseph competently covers well-trodden areas of fathers and sons, family legacies, forgiveness, and homecoming. The Judge is nice, harmless, and wholesome entertainment that reaffirms the nuclear family and aims to satisfy the widest audience possible. It’s hard to find much to fault about the film, and it inevitably seems destined to be the Golden Globe pick of grandmothers everywhere.

Therein lies the only real fault of The Judge: nothing risked is nothing gained. The film never rises above the average of familiar entertainment with which it contents itself. As a courtroom drama, it’s hardly To Kill a Mockingbird; as a dysfunctional family ensemble piece, it’s not exactly August: Osage County; and, as a funeral reunion flick, it’s not much better than Warner Bros. own This is Where I Leave You, which, oddly enough, sees one of the few omissions of its source material lifted and transplanted directly into the screenplay of The Judge. Jonathan Tropper’s This is Where I Leave You features a backstory in which Judd regrets a car-related incident that stripped his older brother of his star-athlete status, while The Judge uses the near-identical storyline between Hank and his coulda-been-a-ball-player bother Glen, which explains much of the rift between Hank and the judge. Studios certainly have the privilege to play Mad Libs with materials to which they have the rights, but the CTRL+C, CTRL+V job between The Judge and a film released only a few weeks ago simply gives more proof to the few risks the film takes as it uses things that have worked in better films audiences have seen before. Precedents are fine in legal proceedings, but they feel a bit stale in films… especially those that needlessly clock in at two-and-a-half hours.

Dobkin never really takes the material outside the safe zone, and the proceedings mount without the slightest hint of suspense or surprise. All turns signal themselves accordingly, all arguments are clear, and no tactics are risky enough to chance an objection, except for the garishly dramatic cinematography by Janusz Kaminiski, which floods the Indiana courtroom in ridiculously overwrought lighting. A fine score by Thomas Newman, on the other hand, makes this small town American drama feel poised and stately, and provides some rousing and emotional moments that should please the proverbial crowds.

The two Roberts, however, more than handily raise the bar, so to speak, in this legal drama. Downey, Jr. rides his charisma as smoothly as possible with a suave, cocky performance as Hank. He never really disappears into the character, though, for Hank is as much a Tony Stark as any other film hero that Downey, Jr. has played of late. Duvall, on the other hand, gives a fierce performance as the craggily judge. His surly, old-school demeanour balances the scales of legacy and responsibility that Joseph weighs so steadfastly during the proceedings, but Duvall’s own balance of the judge’s fallibility and vulnerability frequently saves the film from collapsing under the ham-fistedness with which Dobkin bangs the gavel. Vera Farmiga also gives a nice turn as Hank’s old flame Samantha. She turns what could have been a throwaway character into something special and makes an unnecessary romantic subplot a highlight.

Performance often makes or breaks a case, though, and the folks representing The Judge do their darnedest to convince the jurors of the multiplex to render a favourable verdict. If only The Judge itself bothered to put up a fight. Pleading no contest to a missed opportunity like this one is a minor offense, so The Judge can probably settle for a penalty of time served.

What’s your verdict on The Judge?