Contest: Win Tickets to 'The Theory of Everything' in Ottawa and Calgary! (CONTEST CLOSED) 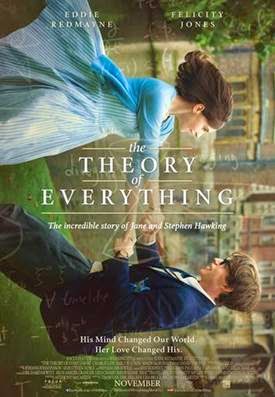 Get ready for one of the year’s most  inspiring films! The Theory of Everything dramatizes the extraordinary true story of astrophysicist Stephen Hawking and his wife Jane Wilde, played by Eddie Redmayne and Felicity Jones, from Oscar-winning director James Marsh (ShadowDancer). The Theory of Everything opens this month from eOne Films, but if you live in Ottawa, Edmonton, Winnipeg, or Victoria, and want to see the film before it hits theatres, answer the trivia below for your chance to win tickets to a sneak peek!

Synopsis: Starring Eddie Redmayne (Les Misérables) and Felicity Jones (The Amazing Spider-Man 2), this is the extraordinary true story of one of the world’s greatest living minds, the renowned astrophysicist Stephen Hawking, who falls deeply in love with fellow Cambridge student Jane Wilde. Once a healthy, active young man, Hawking received an earth-shattering diagnosis at 21 years of age. With Jane fighting tirelessly by his side, Stephen embarks on his most ambitious scientific work, studying the very thing he now has precious little of – time. Together, they defy impossible odds, breaking new ground in medicine and science, and achieving more than they could ever have dreamed. The film is based on the memoir Travelling to Infinity: My Life with Stephen, by Jane Hawking, and is directed by Academy Award winner James Marsh (Man on Wire).

Thanks to our friends at eOne Films, Cinemablographer.com has ten (10) double passes to give away to sneak peeks of The Theory of Everything in Ottawa, Edmonton, and Winnipeg and five (5) for Victoria at the following screenings:

Update: Tickets for the cities above have all been claimed, but a Calgary screening has now been added for Monday, Nov. 17 at Chinook. (Time TBA). Deadline to enter is Friday, Nov. 14 at noon EST!
Update #2: A second screening has been added for Ottawa! Please enter for tickets to see the film on Thursday, Nov. 20 at 7:00 pm at the Coliseum.

For what film did Theory of Everything director James Marsh win the Academy Award for Best Documentary Feature?
a) Project Nim
b) Man on Wire
c) Taxi to the Dark Side
d) 20 Feet from Stardom

Send your answer to contests@cinemablographer.com with the subject “Theory– [CITY].”
(Limit one email entry per person please. Multiple entries will be discarded.)
***Don’t forget to include your city!***

Contest for Ottawa entries closes Monday, November 17 at 8am EST.

The Theory of Everything opens in select cities Nov. 14 from eOne Films.
It opens in Ottawa at The ByTowne on Nov. 21.