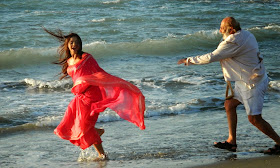 Block 12 handily nabs the prize for the strangest film of the European Union Film Festival so far. This bizarre and eccentric comedy from Cyprus throws in a little bit of everything: family reunions, crooked governments, evil plots for oil, karmic sex, magical realism, and even a Bollywood dancer number. Block 12 might be the looniest film at this year's EUFF, but the sheer randomness of the film is also its charm.

Don’t even bother with deciphering the unintelligible plot as some British agents discover an oil patch under the old mines of Cyprus and try to finagle a deal with Costantas Rizites (Costas Demetriou), the cranky old man who lives on the land with ambiguous claim to the property beyond squatters’ rights. Toss a full-fledged family reunion as all the young Rizites flock back home unawares that their little house sits atop black gold. Things get even loonier as Block 12 crosses wires with the British PM and his boy-toy as they keep tabs on the mission amidst come-hither looks, while the President of Cyprus chimes in every now and then in a cutaway. All the Rizites, meanwhile, pine for the charming Indian servant (Neetu Chandra) named Haniya who comes in tow with the family’s prodigal son and entrances them like some magical gypsy with her aura of exotic music and CGI rose petals on loan from American Beauty.

Block 12 is an amusing sex comedy even if one never really knows just what the heck is going on. Men, women, and children—okay, young boys in the throes of puberty—lust after Haniya and the film whirls with fanciful sexy bits as windows steam, beds levitate, and appendages rise. The enchantress has little to do with the oil, besides ensnaring the affair in silly hijinks and sexually-charged, if problematic, exoticism, although Chandra has remarkable screen presence and DP Yorgos Frentzos makes her look extra gorgeous amidst the picturesque landscape. (The film’s a visual wonder, for sure.) Block 12 is a farcical novelty even if it never works overall, but the film is escapism in its truest form, as it offers a little something for everyone amidst a picturesque backdrop.


Block 12 screens at the European Union Film Festival on Sunday, Nov. 23 at 4:00 pm at Library and Archives Canada, 395 Wellington St.