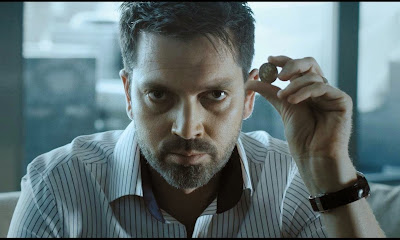 The Conversation meets Wag the Dog in the Slovak/Czech co-pro The Candidate. The Candidate, which screens in Ottawa on Friday, November 14 at the European Union Film Festival, is a sleek and social-media savvy satire with its finger on the pulse of the political circus and both its thumbs feverishly working the buttons of an iPhone as it clicks away at a rapid rate. This sharply produced comedy-thriller is smart and incisive.

Don’t go into The Candidate sleepy and bleary-eyed, though, since this political dramedy is a rapid-fire caper. The film, briskly cut by Matej Benes, has shots as short as those of a David Fincher film as the speedy opening credits roll while Blondacik, a young techno-whiz/hacker, recounts the story of how a shady surveillance man named Jazva (Michal Dlouhy) recruited him for a top-secret mission that ultimately played a role in a landmark Presidential election. Quick cuts and a bracing score set The Candidate in thriller mode as director Jonás Karásek thrusts the action into a hot pursuit as Blondacik continues his story as the action of the film shifts back in time and shows the story from its inception.

A few political bigwigs cut an ambiguous deal while Blondacik and Jazva, a grumpy old man whose scarred face suggests he’s seen far worse, listen in on the conversation. Blondacik narrates about the subject of the conversation, one Adam Lambert (Marek Majesky). Lambert, not the American Idol guy, is Slovakia’s biggest and boldest spin-doctor. Arrogant, cocky, and excellent at what he does, Lambert sells trash as if it’s the last piece of gold on Earth. So, when a peer at the pub challenges Lambert to put a sleeper in the office by making a star candidate out of a nobody, Lambert accepts the challenge. Blondacik’s work, it turns out, is to keep an eye on Lambert and observe his shrewd manipulation of the Slovak people in the sixty days that precede the election.

Lambert’s trickster orchestration of the media and the voters often makes for biting satire as The Candidate shows how easily the masses can be swayed by empty nationalist rhetoric and public personas. Karásek never actually gives the audience the privilege of seeing this upstart candidate as Lambert puts a PR spin on the Presidency: all we get are social media impressions and reaction shots of voters desperate for something to believe in.

The Candidate blends Lambert’s dirty PR rag into the larger backstory of Slovakia/Czech Republic divides as the spin-doctors strategize socialism and nationalism. Blondacik and his ornery co-reconnoiterer take up the debate of Slovak identity themselves as they observe the orchestration of the election, so The Candidate has a lot of fun by teasing out the aspects of ourselves that the PR manipulation seeks to exploit and that we’re equally willing to let them fill. It is, however, frequently difficult to grasp the full political backstory/subtext of The Candidate since it moves at such a madcap pace. This stealthy satire essentially makes a point of ensuring that viewers both onscreen and off take the surface-layer impression as the full story as Lambert and company rise in the polls without offering much substance to the voters.

Majesky is extremely good in his devilish turn as Lambert. His suave, arrogant, and ultra-aggressive performance makes the spin-doctor one of those characters whom audiences love to hate. It’s fun to watch The Candidate take Lambert’s fanatical drive so far, since the film hits closer to home the more extreme the satire becomes. The Candidate feels completely probable even if it’s a work of fiction, but, then again, so did Network almost forty years ago and now that satire is an established reality.

The Candidate screens at the European Film Festival on Friday, Nov. 14 at 9:00 pm at Library and Archives Canada, 395 Wellington St.

Please note that director Jonás Karásek will attend the screening to discuss the film.