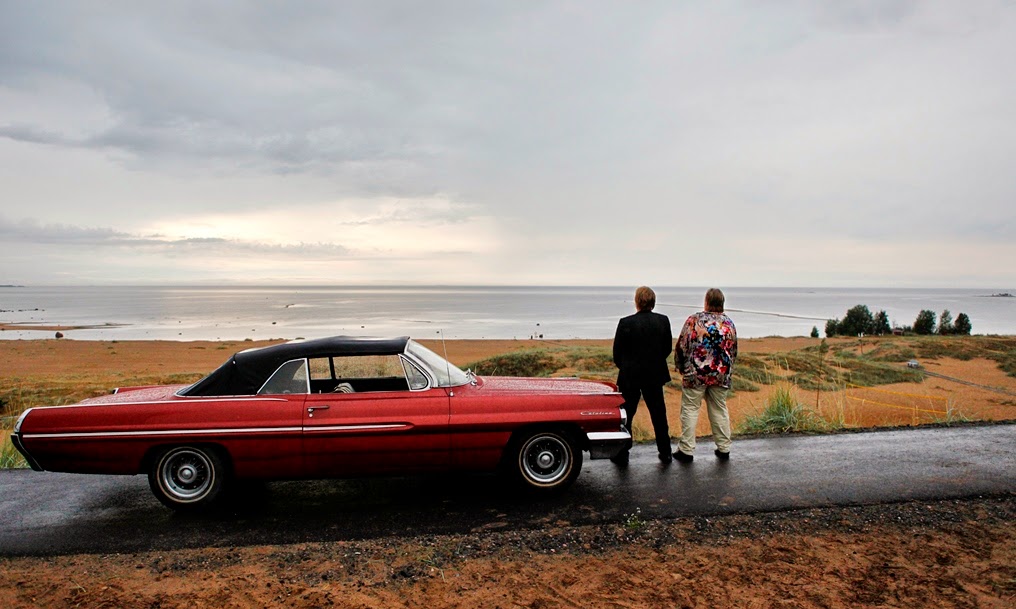 “In Finland, you can just go knock on your relatives’ door,” says Leo (Vesa-Matti Loiri) to his estranged son Timo (Samuli Edelman) as they arrive unannounced on the doorstep of Leo’s equally estranged daughter (Mari Perankoski). Leo himself had just arrived unexpectedly on Timo’s doorstep the night before, introducing himself as the father who bailed on him thirty years earlier and inviting himself to spend the night, so the Fins seem to be a very trusting people as this droll comedy from writer/director Mika Kaurismäki suggests. Kaurismäki, brother of filmmaker Aki Kaurismäki (Le Havre), offers a quirky and affable road movie that’s bound to delight audiences with its tale of family ties when it screens tonight at Ottawa’s European Union Film Festival.


Road North offers a humours spin on father-son bonding as Leo arrives in his son’s life at the very moment he is in need of guidance. Leo drops into Timo’s life like a rotund, boorish guardian angel, and he leads Timo down a road of rediscovery as he imparts the mistakes of his life so that his son can learn to be a better father. (Timo’s own family is on the verge of breaking up when the story begins.)

Road North jovially subverts the coming-of-age trope of the road movie as Kaurismäki mixes black humour with screwball comedy and Timo finds the rough-and-tumble genes of his own life that have slipped through the cracks. Kaurismäki’s slice-of-life observation of family matters is shrewd and smart.Deftly satirical, Road North offers several unusual father/son bonding moments like an amusing fishing episode that results in a kidnapped cat, a tag-team hook-up with a mother/daughter duo, and some jaunts to the sauna with a few puffs of pot. Leo reminisces all the while about the mother that Timo never knew, so this crash course in relationships is as much an act of atonement as it is one of amusement. The morals of Leo's stories are often as ridiculous as his flashy bowling alley shirts, but he speaks with the authority of a wise-old crackpot who sounds crazy enough to be a voice of reason.

The raucous larger-than-life performance by Loiri as Leo reminds viewers that we inevitably end up like our parents no matter how much we wish we would not, while Edelman is appropriately suited for the role of the straight man as Timo wrestles with daddy issues along the way. The journey down which Leo takes his son is mysterious, since he plays coy with his reasons why they need to take a trip together up north, but it’s a peculiar odyssey of family bonds that becomes more endearing as it progresses.