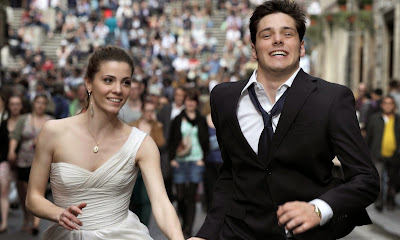 The 2014 European Union Film Festival opens with a hot slice of cinema Italiano with A Special Day. Italy opens the festival this year since the boot-shaped country holds the Presidency of the European Union for 2014 and this Italian offering starts the festival with a nice toast of Prosecco. A Special Day is light and bubbly, a picturesque coming of age story, and a cautionary tale of aimless excess poured into one tall glass that goes down easy.


This film by director/co-writer Francesca Comencini, one of six female filmmakers slated in the EUFF line-up, introduces audiences to one tumultuous day in the life of an aspiring actress named Gina (Giulia Valentini). A Special Day presents Gina early in the morning before she looks like her best self, as she rouses from bed dishevelled and with a mouth full of metal. It takes a fair bit of work to get the young woman prepped in the morning, but, soon enough, she struts out the door in foot-high stilettos where her chariot awaits.

Said chariot is a black sedan driven by a rookie chauffeur named Marco (Filippo Scicchitano), a charming young man but a terrible driven. (Or, at least, a very Italian one!) Gina instantly catches Marco’s eye as he drives her from the working class outskirts of Rome to the heart of the city so that Gina can have a meeting with a notable congressman who thinks he can advance her career.

A Special Day takes an episodic glimpse into the lives of Gina and Marco, for Comencini’s film plays out in a single fateful day filled with seemingly inconsequential interludes that change course of both the characters’ lives. It’s Roman Holliday meets Ferris Bueller’s Day Off as Marco drives Gina around like a princess as they escape their responsibilities and enjoy the reckless freedom of youth as Gina’s appointment is pushed back throughout the day. They don’t really do anything profound or groundbreaking, aside from eating lunch about three times; instead, they simply enjoy the life of the city and take in art and finer things the way that Ferris and company enjoy art and pancreas in New York. (Gina and Marco splurge on Catalan lobster in the film’s third and final lunch break.)

The warm lensing by DP Luca Bigazzi (who also shot the Italian Oscar winner The Great Beauty) intoxicates with its vibrant and energetic framing of Rome, while the frequent long takes of Gina and Marco touring the city invite both a youthful energy and, eventually, a distanced perspective of two people lost amidst such a busy city. Comencini shows the audience how easy it is to be swept up by the beauty and energy of Rome as the postcard-perfect cinematography of A Special Day portrays a city that seems better suited to the sweet life than run-of-mill service work. It’s probably a lot more fun to eat the lobster than it is to serve it, but the film takes an open and ambiguous turn in its finale that gives both the characters a rude awakening that they can’t have all the pleasures in life without any of the work or consequences.

Some of the larks are harmless fun, like a trip to the bowling alley, while others are edgier fare, like a hop over the fence meant to keep the tourists at bay before taking a romantic walk through Rome’s beautiful ruins. One particular episode around the film’s centre—a shoplifting spree—changes the energy of the film—for the better—as Comencini unmasks Gina and Marco as little children unprepared to accept their responsibilities and far more content to have fun with no grasp of the potential consequences.

A Special Day marks each spot of fun the pair has with an underlying morale about the aimlessness of the two protagonists. Why these two young adults are particularly worth following becomes more apparent as the film goes on, as Gina and Marco connect and find common ground as products of a disillusioned young generation in an increasingly impoverished country with dwindling prospects.

Valentini and Scicchitano are both attractive leads and likable performers. Comencini lets the actors have fun with the escapism of Gina and Marco’s day off, but she isn’t afraid to let the actors judge the characters, either, or create complicated personas that invite the audience to question their motives. A Special Day is an unconventional love story of sorts as it’s by turns predictable and open-ended, and the intriguingly abrupt conclusion rebuffs the Pretty Woman finale of happily ever after and invites the audience to wonder if Gina and Marco have much hope for the future. A Special Day is fun and bubbly with a nice kick that lingers after.

A Special Day screens at the European Film Festival on Thursday, Nov. 13 at 7:00 pm at Library and Archives Canada, 395 Wellington St.