Notes from the screener pile continue with three very different films: an odd indie, one of the year’s standout docs, and an electrifying lead performance.

That Shailene Woodley is quite the actress. She’s having a banner year, for she proved that she could carry a movie, for even though Divergent disappointed and didn’t quite make her the next Katniss, her lead performance arguably elevates the film above its shoddy source material. Ditto the cancer weepie The Fault in Our Stars, which is shrill gook worth seeing only for her astonishing dramatic turn, plus the reliable Laura Dern as her radiant mother. Woodley shows yet another side of her skills with the risqué White Bird in a Blizzard, as she stays strong to the indie roots that launched her career. Woodley offers a complex and gutsy performance in White Bird in a Blizzard and proves that, like Jennifer Lawrence, she’s here to stay long after dystopian teen cinema runs its course.

Woodley is a marvel as Kat, a teenager getting over the bizarre disappearance of her mother (Eva Green) in the funky 1990s. Woodley gives her most stripped-down and bold performance as director Greg Araki offers another of his edgy, moody, psychosexual films. White Bird calls on Woodley to play a young role of sexual awakening as she also plays detective, and the girlish seductiveness of Woodley’s performance plays Kat as confident and strong, but totally in over her head.

Woodley impresses, but Eva Green steals the show in her brazen performance as Kat’s lonely/loony mother. Green’s always a little bit nuts, but the eccentricity of Araki’s direction and his willingness to take the actors as far as they want to go is a perfect marriage of minds as Green’s chews the scenery with ferocity of a woman desperate to get the heck out of Dodge and an one unhappy marriage. The film itself might not be as strong as its performances, but White Bird has some truly hypnotic dream sequences that realize the nightmare in which Kat and her mother lose themselves.

White Bird in a Blizzard is currently in limited release from Magnolia Pictures.
It is currently available on iTunes and hits DVD/Blu-ray in Canada in January from VSC. 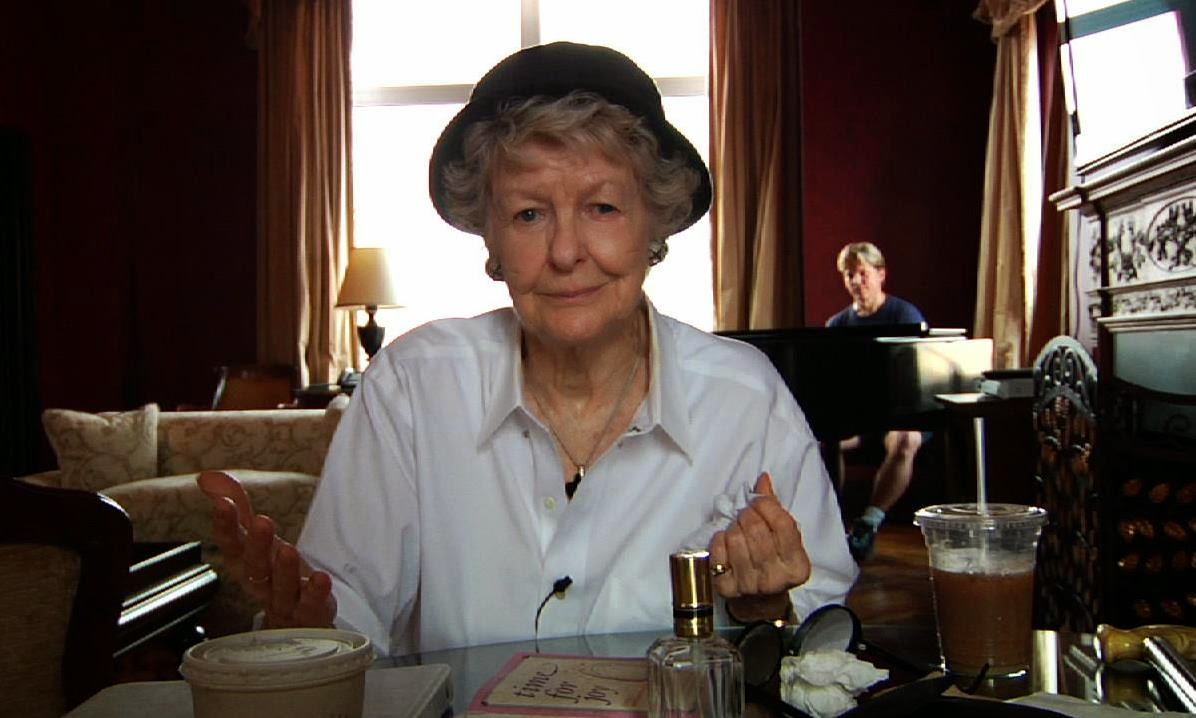 Broadway icon, comedian, and old-battle-axe extraordinaire Elaine Stritch gets a sobering portrait in the terrific documentary Elaine Stritch: Shoot Me. This intimate behind-the-scenes glimpse into the life of the late actress is a must-see for fans of the 2010 doc Joan Rivers: A Piece of Work since it’s a feisty tribute to barrier-pushing actresses who defy the age resistance of show business and go out with their heels on. Stritch’s signature brash humour cuts right through the bullshit of the entertainment industry as director Chieme Karasawa follows her along rehearsals of an upcoming solo show in which she’ll revive some of the top Stephen Sondheim numbers from her career.

The film also confronts the physical and emotional struggles Stritch faces as it sees her take several trips to the hospital for health scares related to her age and diabetes, yet each trip simply ignites more fire into her performances as she gives each show as if it were her last. Stritch riffs on her old age and works it into the numbers, mocking Hollywood ageism while poking fun at herself in turn. Karasawa gets some surprising footage behind the scenes, though, as Stritch senses her approaching expiry date and accepts it in turn, both fearing the end and defying it by going out on her own terms.

The philosophy in Elaine Stritch: Shoot Me is truly remarkable as Karasawa follows the energetic Stritch and gathers interviews from peers in the acting community, including Alec Baldwin, Tina Fey, and James Gandolfini (to whom the film is dedicated), as they share enthusiasm for working with such an eccentric performer—and an admittedly difficult one—who brings out the most in her collaborators. Her demanding flare for showbiz never fades throughout the film, as she, like Joan Rivers, is a perfect embodiment of Bette Davis’s old adage that “Growing old ain’t for sissies,” which Stritch and others reference throughout the film. Elaine Stritch: Shoot Me is an entertaining and insightful portrait of the thrill of performance, a dedication to one’s craft and, above all, a thirst for living life to the fullest until the last day. Stritch’s sass and spark will endure in this wonderful glimpse of her craft.

Elaine Stritch: Shoot Me is now available on VOD. 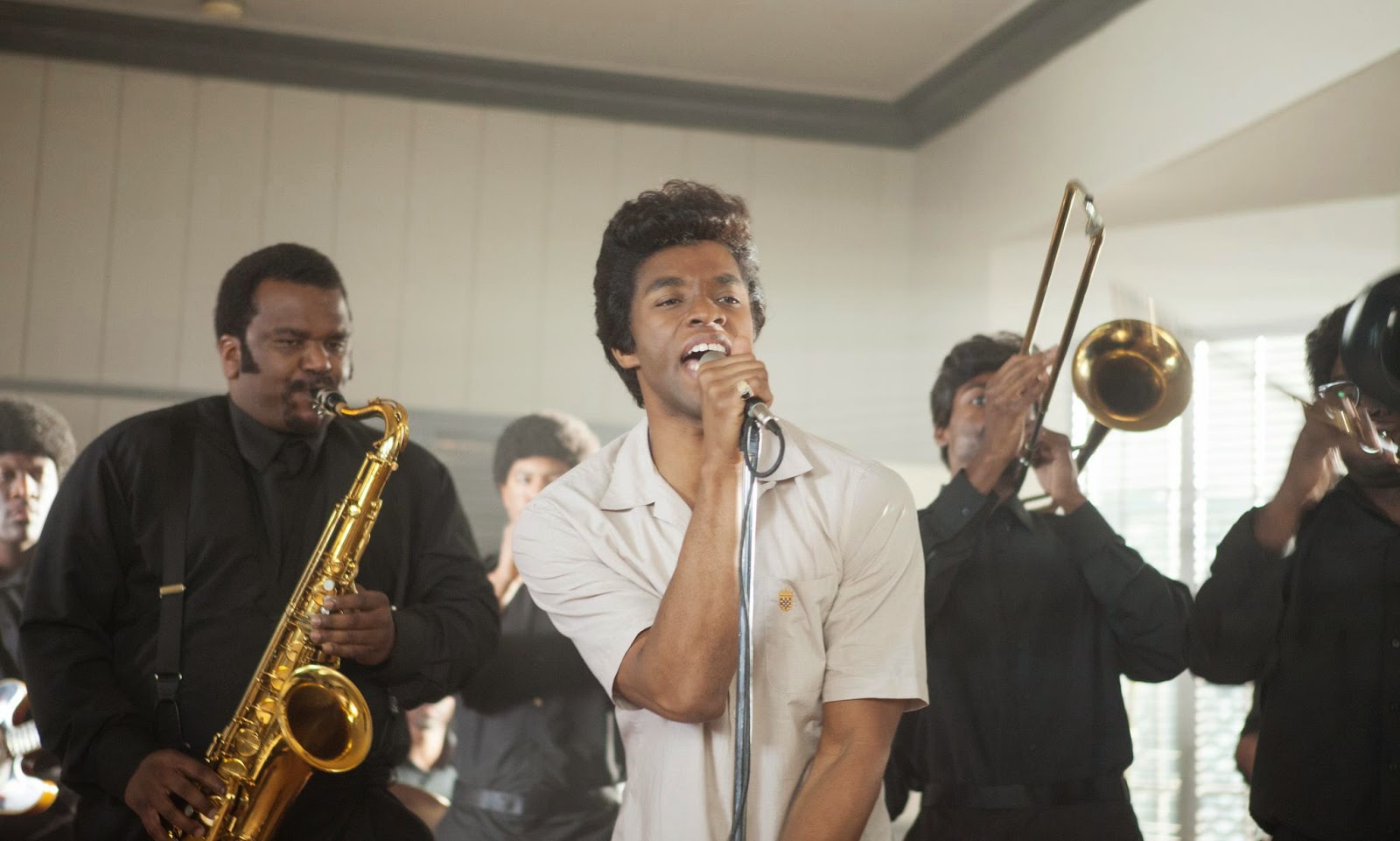 Get on Up plays like crib notes from Film Biopic 101. A great lead performance by Chadwick Boseman (42) as James Brown, the Godfather of Soul, is a fully committed turn that could and should make him a star, but the film is a bloated dramatization that doesn’t jive in tune. Boseman is electrifying, full of soul and swagger as he delivers some of Brown’s most famous songs, dance moves, and randy shouts. Director Tate Taylor makes a disappointing follow-up to The Help, though, since Get on Up struggles to balance the drama on a wide canvas that calls for showstopping numbers, powerful flashbacks, and forceful confrontations with violence, booze, and drugs. The film mostly suffers from a formless editing job that leaves the musical numbers clunky and the criss-crossing flashbacks incoherent, especially a climactic scene with Viola Davis as Brown’s estranged mother. This scene could be the emotional force of the film, but Get on Up undercuts it with a disappearing act that shuffles it around the film.

Many of the numbers are awkwardly staged, and Brown’s infrequent direct-addresses to the camera do little to comment on the material or involve the audience in the sprawling biopic, but the charm of Boseman’s performance handily saves everything. The energetic performances alone do Brown’s story justice, though, and Boseman’s soulful work demands to be seen, so Get on Up nevertheless marks a worthy offering for fans of Ray and Walk the Line since it’s bound to induce some infectious toe-tapping. Efforts by the arts departments, especially the costumes by Sharon Davis, elevate the production while the booming sound mix ensures that Brown’s music is powerful and funky.

Get on Up is currently in theatres from Universal Pictures.


The recent binge-watching also included a return visit to The Grand Budapest Hotel, which is just as much fun on the second trip. This one's on my top ten list for sure!