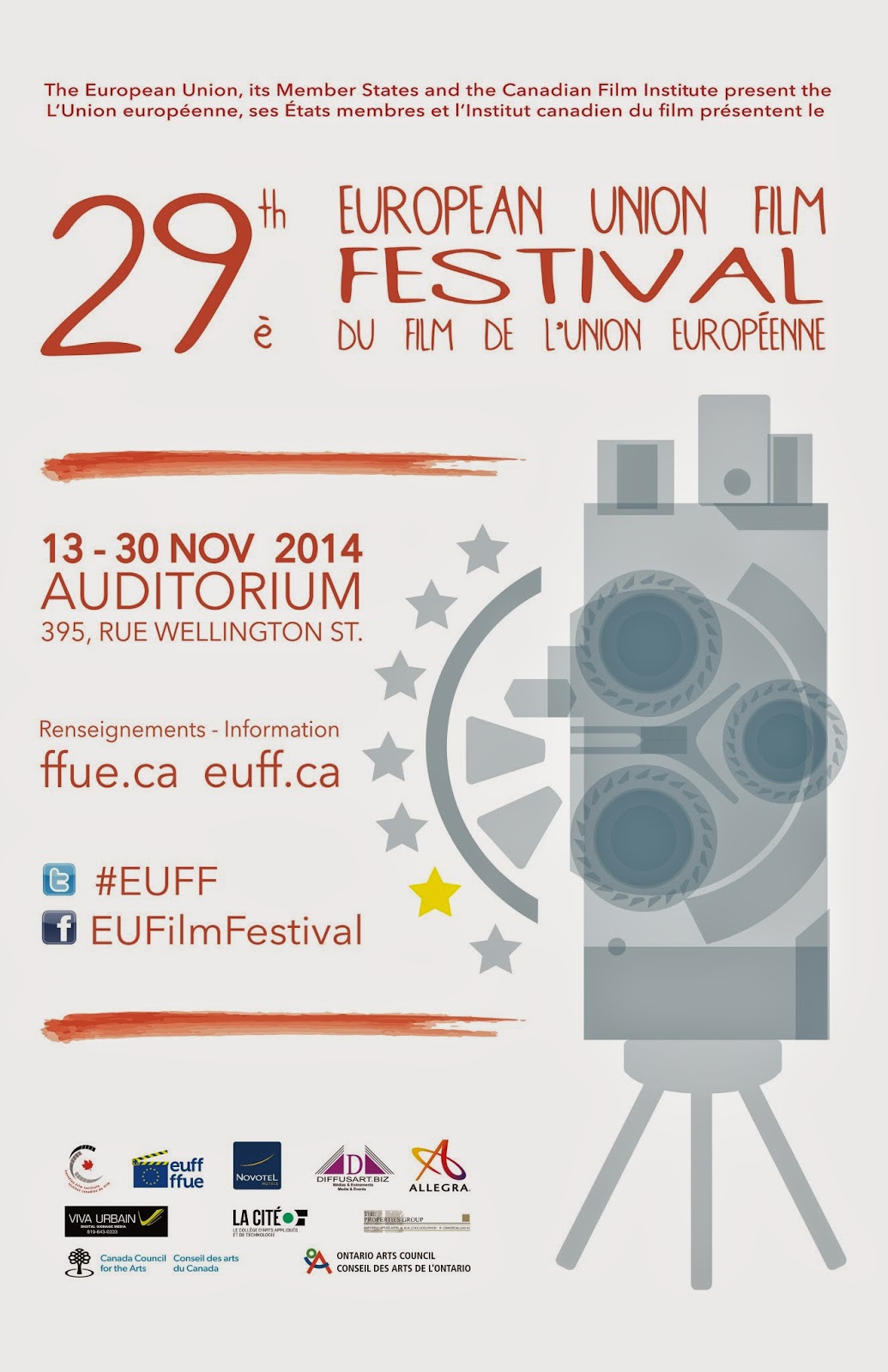 Who’s still bobbing their heads to “Let it Out”, the theme from last year’s European Union Film Festival hit A Trip? Ottawa filmmies loved the song so much it brought Googlers galore, and the popularity of the catchy tune used in last year’s festival trailer shows how much this Ottawa festival connects with local audiences. Cinephiles get their annual treat once again when the European Union Film Festival (EUFF) screens in town this week. EUFF is presented by the Canadian Film Institute, the Delegation of the European Union to Canada, and the Member States of the European Union. EUFF continues to grow in its 29th year, which makes it one of the longest running film festivals in town, yet EUFF stays young at heart by showcasing cutting-edge examples of world cinema with hip hooks like “Let it Out.”


The screenings at this year’s EUFF will get audiences in the mood for European films as the annual festival trailer, made by CFI programmer Jerrett Zaroski, uses the rousing theme from the Slovak thriller The Candidate (Kandidàt), which is a timely contemporary dramedy with its finger on the pulse of contemporary politics and both its thumbs working the texts and tweets that define a generation. The engaging theme of EUFF promises an exciting year at EUFF with a strong range of genres and styles, and The Candidate, a political comedy-thriller, is just one of many diverse films that cinephiles may enjoy in the Ottawa film scene.

Comedy fans are particularly in for a treat, since a whopping third of the twenty-seven films screening at EUFF this year are comedies, one of which is Germany’s breakout hit Fuck You, Goethe (Fack Ju Göhte) aka Suck Me, Shakespeer in some corners of the globe. This sex-comedy is the biggest German box office hit in years, as it’s the first German film in six years to draw over 5 million domestic admissions. This escapist tone will hopefully make a repeat of last year’s successful comedy screenings, since films at EUFF 2013 like Denmark’s Superclásico and Italy’s Weddings and Other Disasters were sell-out hits. Italy opens the festival this year following the tradition in which the Member State occupying the Presidency of the European Union gets the honour of the opening night slot. This year’s Italian night offers the Roman romance A Special Day (Un Giorno Speciale)… and hopefully some fine Italian wine!

This year’s festival also highlights a notable progressive trend in films from the EU, for CFI Executive Director Tom McSorley noted at last week’s EUFF launch that this year’s festival enjoys an “accidental strain” that spotlights women. Many of the films in this year’s programme feature strong female roles, but far more significant is the fact that six of the twenty-seven films at the festival credit female directors. That’s an impressive figure by any measure (22% of the line-up) and beyond the two or fewer titles with female directors that have played in programmes of comparable size at festivals such as Cannes.

One of these six directors will be on hand to share her film with Ottawa audiences. Signe Baumane, director of the Latvian film Rocks in My Pockets (Akmeni Manăs Kabatăs) will introduce her film on Friday, November 28th and discuss the film with CFI-goers. Rocks in My Pocket marks one of the hotter nights of the festival, for not only will Baumane be on hand, but she’ll be presenting one of the buzzier EUFF films, as Rocks in My Pocket is Latvia’s official submission for Best Foreign Language Film in this year’s Academy Awards race. Baumane is one of two guests whom EUFF welcomes to the festival, as The Candidate’s Jonáš Karásek will also be attending the festival on Friday, Nov. 14.
The added novelty of Oscar buzz and director/audience engagement makes a strong event even better, for films from the European Union have been enjoying an especially strong presence in local festivals with the recent Ottawa International Animation Festival opening with the whimsical Estonian musical Lisa Limone and Maroc Orange: A Rapid Love Story and with Ottawa’s Cellar Door Film Festival launching recently with a sold-out screening of the Bulgarian horror film Roseville. The growing presence of EU films on the local festival circuit ensures a healthy appetite of cinephilia and shows that all good EU/Canada relations begin with a healthy appreciation of art and culture. The European Union Film Festival is an annual highlight since it’s arguably the best and most diverse festival in town. Local readers have lots to see and many places to visit in the weeks to come, while Toronto and Vancouver audiences can expect as strong a treat when the EUFF brings more diverse programming to the respective cities later in the fall.

Synopsis: Gina and Marco are living in the suburbs of Rome. The two meet on a very special day: their first day at work. They have a future that awaits them and really seems at hand. Gina is about to realize her dream of becoming an actress, while Marco for the first time has found an opportunity that allows him to start dreaming: a job in a car rental company as a driver. They are enabled to know each other since his first duty is to drive Gina to an appointment, and given a delay, they have to share the whole day. This journey will take them from the periphery to the center of the city, will serve both to compare their experiences and think about a future that has already begun.
Why it’s worth seeing: Last year’s bubbly Italian offering Weddings and Other Disasters was so popular that the festival added a second screening of the film. I’ve never seen that happen, so it’s an oddly appropriate coincidence that the popular Italian cinema opens this year’s festival. (Italy’s recent Oscar win for The Great Beauty is also bound to bring additional interest to opening night.) This picturesque film from director Francesca Comencini has all the female-filmmaker-friendliness of EUFF’s 2014 slate. Comencini’s offering comes to Ottawa after debuting in competition at the Venice Film Festival and, like her filmmaker sister Cristina (director of Italy’s 2005 Oscar nominee Don’t Tell), she’s one of several female filmmakers making waves in Italy and in the international scene more broadly. (Plus, the Italian Embassy usually has one of the better post-screening spreads of the festival!)

Synopsis: Right alongside Jerusalem, in a Russian Orthodox Convent in the Mount of Olives, in the middle of the Arab quarter, lives the 82-year-old Estonian nun Mother Ksenya.
Why it’s worth seeing: The CFI festivals offer a healthy range of European cinema, yet Estonia consistently proves itself one of the most formidable national cinemas with each film that screen in Ottawa, such as Demons in 2013 and Living Images last year. These films, like the aforementioned Lisa Limone or other Estonian films like the doc Blood Type that played at Bright Nights, showcase innovate talents with an eye for film form that simply isn’t matched anywhere else. The critically-acclaimed Flowers from the Mount of Olives is one of several documentaries screening at the festival, and EUFF-goers are almost assured to see one of the most compelling films of the line-up.

Synopsis: A Swedish family travels to the French Alps to enjoy a few days of skiing. The sun is shining and the slopes are spectacular but, during a lunch at a mountainside restaurant, an avalanche turns everything upside down. With diners fleeing in all directions, mother Ebba calls for her husband Tomas as she tries to protect their children. Tomas, meanwhile, is running for his life... The anticipated disaster failed to occur, and yet the family's world has been shaken to its core, a question mark hanging over their father in particular. Tomas and Ebba's marriage now hangs in the balance as Tomas struggles desperately to reclaim his role as family patriarch.
Why it’s worth seeing: Force Majeur is one of the biggest foreign critical hits of 2014. The film comes off the fall festival circuit where it drew raves at TIFF following its well-received premiere at Cannes where it won the Jury Prize in the Un Certain Regard program. The film is now Sweden’s official submission for Best Foreign Language Film and it’s arguably a top contender in an increasingly competitive Oscar race.

Synopsis: Signe Baumane and five women in her family battle with depression and madness.
Why it’s worth seeing: EUFF offers a double whammy of Oscar contenders on Friday night with the back-to-back offerings of Force Majeur and Rocks in My Pockets. Rocks in My Pockets might not have the same high profile as Force Majeur does, but this unique animated film has some extra edges for awards junkies: not only is the film Latvia’s contender, but it’s also one of twenty animated features in contention for the busy hurdle towards Best Animated Feature. Ottawa cinephiles should make Rocks a priority, though, since director Signe Bauman will be in the house to discuss her eccentric film and since Rocks is one of several EUFF titles without Canadian distribution, so chances are this will be the only chance to see the film in Ottawa.

Synopsis: This gripping spy thriller tells the true story of a man who dares to challenge the Soviet empire. While planning the maneuvers of the Warsaw Pact forces, Polish army colonel Ryszard Kuklinski has access to top secrets. He gets to know that the American nuclear counterattack against Soviet forces is planned to be executed on Polish territory. Thanks to his determination, he starts a long, lonely and psychologically exhausting cooperation with CIA. From that very moment the life of his family and his own is in constant danger as one careless move may lead to tragedy.
Why it’s worth seeing: Jack Strong might be one of the few EUFF films that could see a theatrical life outside the festival since it co-stars Patrick Wilson (The Conjuring) and Dagmara Dominczyk (The Immigrant), but it easily looks like one of the most impressive films at EUFF. Jack Strong screens on a night of back-to-back of spy thrillers on November 22 with Hungary’s Ambassador to Bern preceding it, but this sleek Cold War thriller, based on a true story, is reportedly a solid and engrossing film experience.

The complete 2014 EUFF schedule may be found on the CFI’s website.

Please visit www.cfi-icf.ca for more info on films and tickets.
Advance tickets may also be purchased through Uniiverse.

What films are you planning to see at the EUFF?