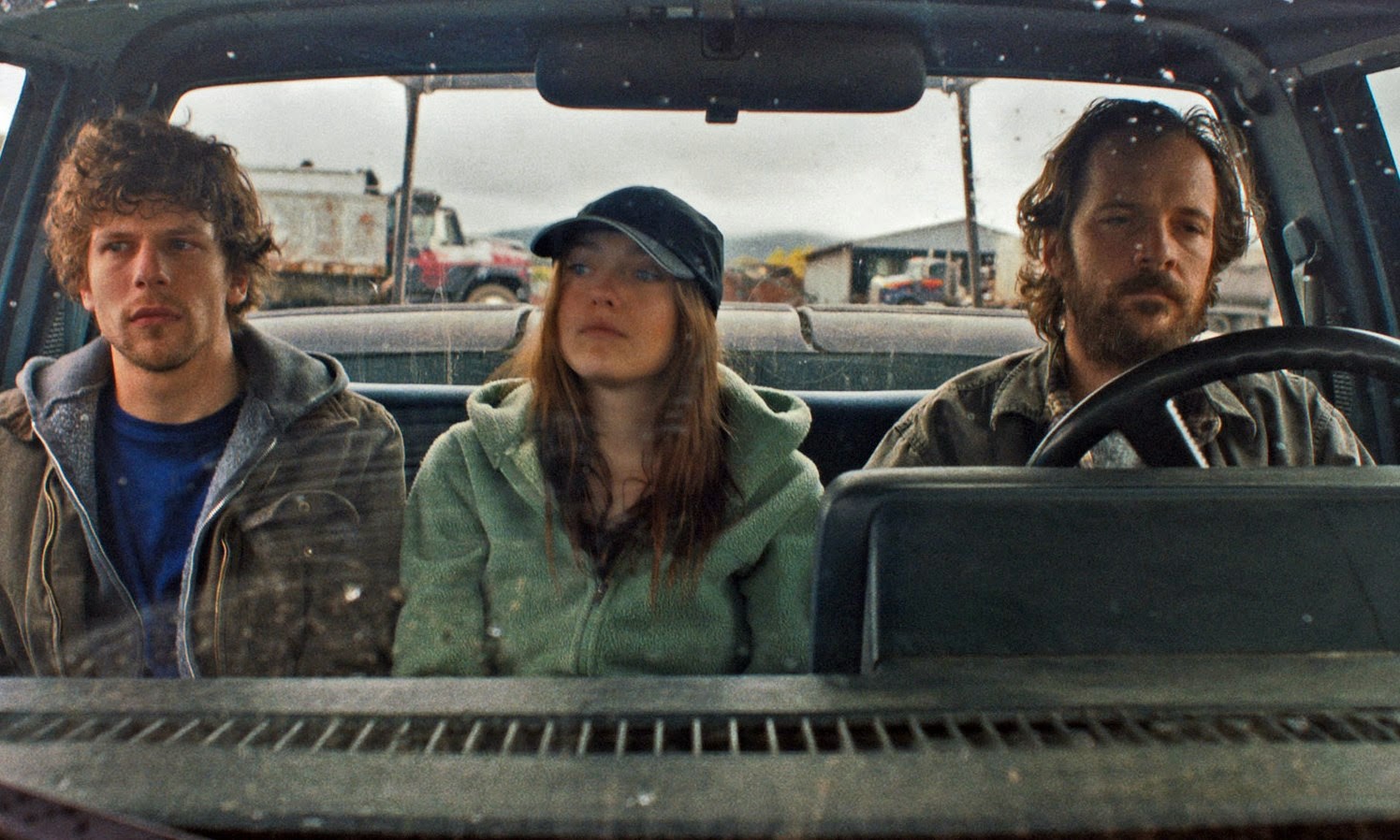 “If you bombard people with horrifying images,” says one environmentalist following a documentary screening in Kelly Reichardt’s Night Moves, “it leads people to think it’s too late.” The moviegoer’s query seems oddly fitting after one hears the same sentiment in the other Planet in Focus selection, Living on the Edge. Whereas photographer Joan Sullivan instead chooses to capture the beauty of sustainable living to convey the effects of climate change, Night Moves methodically explores the actions of those who take drastic measures as final results for saving the environment. This methodical thriller by Kelly Reichardt (Meek’s Crossing, Wendy and Lucy) might be the first legitimate eco-terrorism drama to hit the big screen and, if it isn’t, then it’s arguably the best.

Reichardt delivers one of her best films yet with this impeccably toned and paced thriller about the consequences of radical actions. Three well-meaning radicals—Josh (Jesse Eisenberg), Dena (Dakota Fanning) and Harmon (Peter Sarsgaard)—aim to blow up a dam and shake the masses into seeing their own dependency on hydroelectricity. Josh, Dena, and Harmon, ever the green-minded radicals, make a giant bomb out of fertilizer. Slow, near-silent scenes see the three environmentalists build their explosive device with passion and precision. There’s nary a word about the motivation behind the cause, though, so the dramatic episode of the first half of Night Moves positions the trio as radicals rather than revolutionaries. There’s little question that this is an act of eco-terrorism.

Throwing around the T-word sounds a bit too “American,” yet Reichardt’s potent film takes aim at the rhetoric and ideology that breeds such radicals. The director builds the drama absorbingly and captivatingly as she lets the audience watch the three actors, all of whom are at the top of their games, work together in tense silence. The climax of their mission is equally muted, for Reichardt even omits the money shot of the explosion to which the film builds. Night Moves instead holds a long take—one of Reichardt’s signature coups—that lets the weight of the actions sink in for Josh and Dena as they throw away their youth for a misguided charge.

There’s nary a peep about the incident, aside from a muted “good for them” and a smug reaction shot of Josh, and much of the publicity and conversations provoked by the explosion focus on both the senselessness of the act and the criminal repercussions. There’s a way to start a conversation and there’s a way to end one, and blowing up a boat full of fertilizer just ignites a shit storm.

In the background of the second act of Night Moves bustle the efforts of other environmentally conscious Americans taking a stand for sustainable living. Food co-ops and energy conservation both work their way into the frame, while Reichardt (who also edited the film) inserts a match shot of the hands at Josh’s co-op tilling soil with the same tools and concentration with which Dena and Harmon turn fertilizer into a bomb. Night Moves, much like the photography of Joan Sullivan, presents the positive aspects of sustainable living as superior to the doom and gloom imagery that leads folks to think the end is nigh. Farming might not provide the same adrenaline rush as blowing up a dam does, and Reichardt’s meticulous pacing undoubtedly ensures that, but it enacts tangible change one carrot at a time.

The film really moves in its final act, though, as Night Moves takes a Double Indemnity-like shift and guilt gets the better of one of the radicals and the three eventually turn on themselves. The film is utterly gripping for all its minimalist intensity, as Reichardt favours a bare bones style that lets the psychology and empty ideology of the radicals wrack up the suspense as the film builds to a taut and unexpected finale. The swelling tension of Night Moves lets the moral weight of Josh and Dena’s actions (little phases Harmon) collapse psyches with the same force of the bomb on the dam. This disciplined character study lets the consequences of the characters’ deeds weigh deeply without prescribing an easy answer. The images of Night Moves might be horrific in the end, but Reichardt leaves it open for viewers to debate whether it’s too late.