Planet in Focus Review: 'On the Trail of the Far Fur Country'

On the Trail of the Far Fur Country 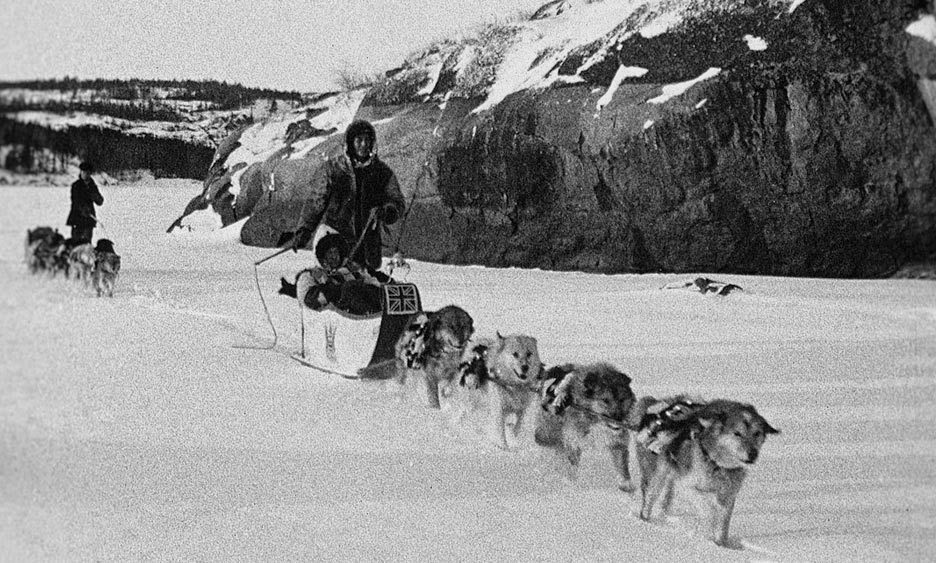 This year’s Planet in Focus unearths a true gem of Canadiana in the breathtaking doc On the Trail of the Far Fur Country. Fur sees filmmaker Kevin Nikkel mine the archives of film and Canadian history and turn the camera back on contemporary Canadiana in turn. This beautiful achievement in filmmaking is both a reflection on Canada’s history and a look forward at the journey ahead.


Nanook of the North, as On the Trail of the Far Fur Country says, often receives credit for being the first feature-length documentary, but many film buffs know that Nanook contains a healthy dose of fiction. (It’s also a totally condescending and racist bit of ethnographic filmmaking, even if one gives it the benefit of the doubt as a product of its time.) Nikkel’s film, however, offers rare footage from another trek to the Canadian north that actually precedes Nanook—and said archival film also happens to be a legit documentary and a comparatively fairer (but still problematic) portrait of Indigenous persons in Canada. Said film is The Romance of the Far Fur Country, an ethnographic film/travelogue/promo piece commissioned by the Hudson Bay Company and directed by Harold Wyckoff, which travels through the Canadian arctic and the Pacific Northwest documenting the fur trade and the everyday life of Indigenous communities.

The restored footage alone makes On the Trail of the Far Fur Country a great find for film buffs and history buffs alike. Nikkel and his team present the impeccably rendered footage—exceptionally beautiful cinematography, it is—and return to the villages that serve as the settings for the original film. “It feels like the film is an old photo album,” Nikkel narrates as he passes his iPad around to the descendants of the people pictured in the film. Members of the younger generations point out relations long deceased and observe changes in the landscape and character of their communities. The film shows the descendants reconnecting with a severed part of their past, for few images, still or living, capture a sense of the life that marked the realities and struggles within these corners of Canada circa 1919.

These glimpses into Canada’s past offer a rare look at the country at a time of change, and the elements of encounter—positioned as such in the original film—reveal the odd dynamic of fascination and suppression put forth by colonial Canada, especially in one sequence in which Nikkel and the participants watch traditional ceremonies and remark how certain customs were banned, yet invited by a fascination with the “other.” Alternatively, the film offers footage of some of the most iconic images and settings of First Nations communities within Canadiana, including the two breathtaking totem poles that adorn the Canadian Museum of History (né The Museum of Civilization) in Gatineau. (Although the transfer of the totems from their home to the museum is in itself another unspoken means by which Canada appropriates the lives and cultures of First Nations people for its own interest…)

The descendants also use the film to reflect upon the cultural erosion of First Nations communities, as elements of the Residential School system creep into the film despite a noticeable effort from the HBC folks to the schools outside the frame of Romance. The title cards of the classic film, on the other hand, certainly don’t show any modesty in framing the First Nations characters of the film as noble savages being ushered into civilization. On the Trail of the Far Fur Country therefore presents a noteworthy improvement upon documentaries of the past, as it learns from its elders and avoids making the people of the communities it visits mere subjects of a film. They’re collaborators, storytellers, and active participants in both the interpretation and narration of the film this time around. On the Trail of the Far Fur Country finds a poignant and appropriate reflectiveness as the many voices reflect on what they’ve lost as a community, but have also gained by seeing this hidden document of the past. As On the Trail of the Far Fur Country resurrects this lost slice of history and recontextualizes it within the present, juxtaposing archival excerpts with contemporary interviews, the film turns rote history into shared history, which is another laudable feat of this wonderful documentary.

On the Trail of the Far Fur Country screens at Planet in Focus on Saturday, Nov. 8 at 6:00 pm at the AGO.
Please note that filmmaker Kevin Nikkel will attend for a Q&A.

Update: On the Trail of the Far Fur Country screens in Ottawa at The ByTowne on May 24 at 6:25pm.