'Interstellar' Gets Lost in Space 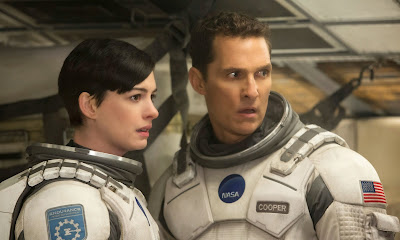 Christopher Nolan flies through a wormhole of cinematic exploration in the innovative Interstellar, but the film gets lost in space. Interstellar is a spectacularly realized feat of unintelligible jibber-jabber. This visually stunning and phenomenally executed special effects extravaganza deserves to be seen on the big screen, yet Interstellar is often utterly incomprehensible.


One must applaud Nolan’s efforts, since any trip to outer space is a difficult act to follow after 2013’s Gravity made audiences feel like they could reach out and touch the stars. Interstellar avoids the 3D bonanza that, for better or for worse, defines Gravity’s power, so it’s more on the visual plane of 2001: A Space Odyssey or Nolan’s own Inception. Interstellar, however, lacks the thrilling escapist element of Gravity, the mind-blowing ride of Inception, and the philosophical depth of 2001. It certainly strives for all three and comes very, very close to achieving some of these marks, but the screenplay by Nolan and his brother Jonathan Nolan is far too convoluted a mess for the film to resonate beyond the awe of its mechanics. Interstellar, even with all the expository dialogue that marks one of Nolan’s trademark ways for making his ambitious projects so accessible and enjoyable, is often impossible to follow. If Inception is a mind-bender, then Interstellar is a head-scratcher and, on some levels, a total cosmic brain fart.

It begins intelligibly enough as Matthew McConaughey’s rugged farmer Cooper stumbles upon a secret NASA mission after he and his daughter Murph (Mackenzie Foy) deduce some coded message left by some mix of an apparition and the deadly dust storms that are ravaging the Earth’s food supply and killing the planet. As Cooper leaves Murph, obviously his favourite child, behind and launches into space with Dr. Amelia Brand (Anne Hathaway) and a team of fellow astro-physicists, Interstellar flies into breathtaking old-school sci-fi. The slow and increasingly complicated plot requires a lot of dialogue to spell things out, and the on-the-nose talkiness of Interstellar becomes its biggest hindrance since Nolan isn’t nearly as good a writer as he is a director.

The research might be accurate and the science might be sound, but the ‘fiction’ part of this science fiction film drowns it. The finale is just too dumb to accept as either philosophy or entertainment. It’s Cloud Atlas-y dorm room mumbo jumbo that invites one of Mary Pols’ Domino’s Pizza zingers. Intelligent characters convey big ideas in layman’s terms, yet the mere recitation of words like “worm hole,” “space/time continuum,” “relativity,” and “third dimension,” “fifth dimension” and what have you does not necessitate an intelligent film. Interstellar works best when it lets the visuals do the talking.

What astounding visuals they are, though, since Interstellar makes faraway galaxies look exceptionally real. The wormholes and black holes that Cooper and Brand navigate are awesome spectacles, especially since Interstellar doesn’t need the cash grab of 3D for a viewer to appreciate the full experience. Inside the spacecraft is even another story, since Nolan’s sturdy handling of these tight weightless confines is bracingly impressive. The production design by Nathan Crowley is exceptional—and it gives Interstellar a notable contemporary feel since the film uses few technological doo-dads to make the future resemble the present aside from a talking robot, voiced by Bill Irwin, which offers further proof that comic relief robots never do a sci-fi film any favours.

The ashen cinematography by Hoyte Van Hoytema, rather than Nolan regular Wally Pfister, is bold and breathtaking, if sometimes a little too dark, while the editing by Lee Pace smartly makes the action feel secondary to plot and character, yet makes Interstellar an occasional thrill ride. Especially good is the film’s sound design with whooshes, clicks, and beeps creating and atmosphere and building suspense. Just like in Gravity, though, Interstellar is most impressive when the sound mix puts the audio in a vortex and makes the world of space a soundless one. The silence in Interstellar allows one to sit in awe.

The few moments of total soundlessness are also respites from the obnoxiously loud score by Hans Zimmer, which amplifies the action full throttle with an electric organ. Interstellar sounds like cracked-out church music or like a parody of a Christopher Nolan film. The bombast doesn’t help the film’s ending, either, as it grates and drowns out some of the dialogue that explains the film’s convoluted logic.

Interstellar often feels wondrous even in the moments in which it seems exceptionally stupid or full of empty academic rhetoric. McConaughey is a spot-on casting choice for the likable and fallible everyman Cooper, and he keeps the McConnaissance a-rollin’ by tackling Interstellar’s tricky balancing act that requires him to be both the sturdy action hero, the voice of reason, and the emotional core. Few films have an action hero, astro-whiz and a daddy with a daughter rolled into one leading man, and Interstellar often succeeds by humanizing dense intellectuals and their usually detached demeanours. Hathaway, on the other hand, often looks like she’s overcome with nausea, although the film somewhat gains credibility by frequently noting how far Brand is in over her head. Chastain is especially strong in her turn as the elder Murph, who grows up while her father ages far more slowly in the time warp of space. Interstellar calls on Chastain to carry much of the film in monologues in which Murph speaks into a monitor with the hope that Cooper finds her message. As Chastain conveys raw human emotions and induces greater awe than the cosmos of the visuals, Interstellar frequently works a step above most studio films even if it never really works overall.

This film of impressive scope and comparably slighter resonance is a true cinematic experience despite its faults. A visually-stunning musing on the fundamentals of human connection, Nolan’s ambition is remarkable for its technical wonder and for its attempt to take studio conventions to greater heights. Interstellar, like CSI Miami, might best be enjoyed with the volume off, but the awesome visuals demand to be seen at least once with the sensory overload of astro-jargon and Phantom of the Opera pipe cues in order to appreciate fully the spectacular mess that is Interstellar.

What did you think of Interstellar?