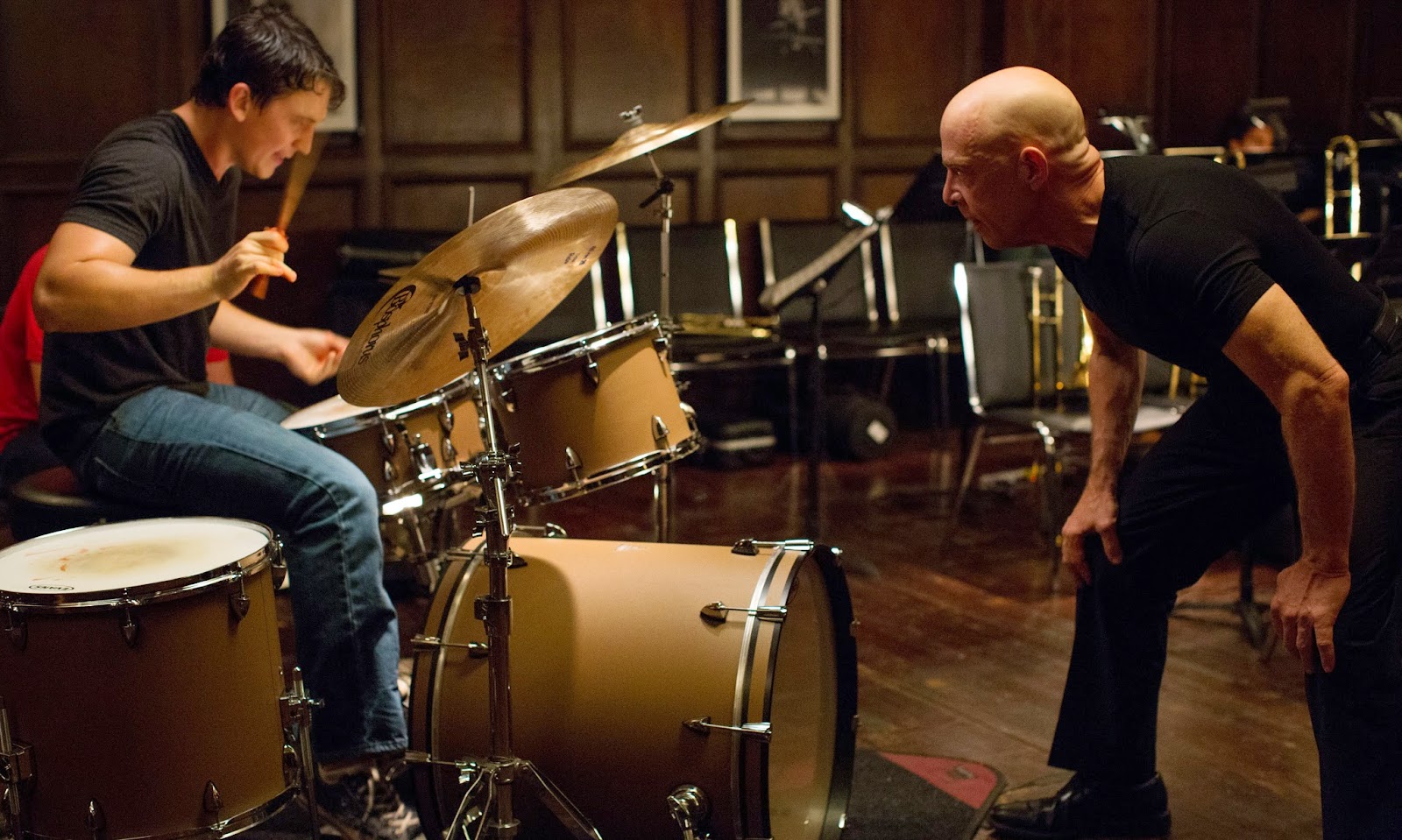 “Alternates, wipe the blood off my drums,” commands Fletcher (J.K. Simmons) following an intense rehearsal during practice for the Studio Band at Shaffer Conservatory. Fletcher runs band practice at the elite fictional music academy as if it’s boot camp, and Whiplash takes an unconventional look at the teacher-study relationship as Fletcher pushes one student, Andrew (Miles Teller), to the extreme. The drama might be farfetched—nobody bleeds that hard from drumming—but Whiplash pulses with the passion that consumes an artist when he strives to stand out in a competitive field.


Writer/director Damien Chazelle crafts an energetic mentor/student tale by conducting Fletcher and Andrew with the dynamic of a call and response song in which one player delivers a note and the other hits back. Simmons commands the screen with his performance as Fletcher, the bald, poised, and precise conductor who demands perfection to the point of sadism. He claps his hands jovially to the tempo, abruptly interjecting, “That’s not quite right” when Andrew rushes the beat on a first reading. The practice continues with Andrew drumming and Fletcher interrupting, and the pace builds a crescendo as the conductor’s own hands and anger start pushing the musician so rapidly that they substitute the rhythm of the drums.

Fletcher directs the band with militant precision, taking no excuses, and he assaults his band with gung-ho machismo to shape the students into the best that they can be. Threats, intimidation, and emotional manipulation are all part of his game—although the one point in which he hurls a chair at Andrew strains credibility even if it’s a thematic high note—and exploit the students’ passion to succeed to satisfy his own ego. There’s a close shade of R. Lee Ermey’s cantankerous drill sergeant from Full Metal Jacket in Simmons’ fierce performance as he controls the band with an intensity that could have Shaffer tromboners shitting Tiffany cufflinks at any moment. (To borrow one of Sgt. Hartman’s most colourful phrases.) Simmons gives a towering performance as Fletcher kicks the students in metaphorical mud and pushes them to drum at a rhythm that outpaces their bodies. Simmons, resuming the role of Fletcher from Chazelle’s short film Whiplash that serves as inspiration for the feature film, chews the role with villainous delight.

Teller holds his own in this full metal jazzfest as Andrew throws himself into rehearsals and meets Fletcher’s grueling regime. Teller, who has being playing the drums since he was sixteen, often matches the intensity of Simmons’ performance with the physical force with which Andrew plays the drums. Enough sweat pours off Andrew’s face and onto the drums to suggest that Andrew’s fighting a do-or-die battle, and both actors have the stamina to make Whiplash a taut and engaging duel between two equally driven and committed soldiers.

Whiplash sometimes strains credibility with the sadism that Fletcher inflects upon his students, but the film captures the exacting demands for perfection from both the artist and the teacher. The intimidation is palpable as editor Tom Cross cuts back and forth between Andrew and Fletcher with a bracing rat-a-tat-tat while some dizzying swish pans by DP Sharone Meir convey Andrew’s exhaustion and the perverse thrill Fletcher gets from wearing him out. The tempo of the film is a thrilling syncopated rhythm as Andrew evolves as a man and as an artist by gaining the stronger beat.

The ferocious showdown between the two musicians swells and rises as Andrew both progresses as a drummer and recognizes Fletcher’s cruelty. The film could play much like jazz does to an untuned ear, since the story repeats itself to the point of exhaustion and Chazelle drags it out far too long, but Whiplash comes to great climax as student and teacher face off mid performance and challenge each other’s authority in a blow-for-blow percussiveness that makes musicians into legends. Whiplash infuses Andrew’s arc with jazz lore about Charlie Parker’s evolution in “Bird,” for Fletcher frequently reminds his student that the jazz icon only became great when his conductor Jo Jones threw a cymbal at his head. If Andrew wants to be Charlie Parker and Fletcher strives to be the next Jo Jones, then Whiplash finds greatness when it lets the wannabe-titans clash like two mighty cymbals.

Whiplash is currently in theatres from Mongrel Media.
It screens in Ottawa at The ByTowne and Landmark Kanata.

What did you think of Whiplash?