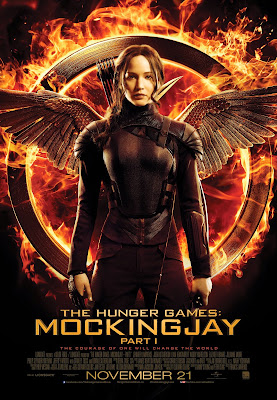 Citizens of Panem! Who is ready to volunteer for the next round of The Hunger Games? The third and final instalment of the beloved franchise begins when Oscar winner/superstar/coolest person ever Jennifer Lawrence returns as Katniss in The Hunger Games: Mockingjay – Part 1. Mockingjay opens in theatres November 21 from eOne Films, but the district of Cinemablographer (ie: the best district) has tickets to sneak peeks of the film across Canada! If you live in Ottawa, Calgary, Edmonton, Halifax, Toronto, Winnipeg, Vancouver, or Victoria and you want to see Mockingjay before it hits theatres, answer the trivia below for your chance to win tickets to a sneak peek!

Synopsis: The worldwide phenomenon of The Hunger Games continues to set the world on fire with The Hunger Games: Mockingjay - Part 1, which finds Katniss Everdeen (Jennifer Lawrence) in District 13 after she literally shatters the games forever. Under the leadership of President Coin (Julianne Moore) and the advice of her trusted friends, Katniss spreads her wings as she fights to save Peeta (Josh Hutcherson) and a nation moved by her courage. The Hunger Games: Mockingjay - Part 1 is directed by Francis Lawrence from a screenplay by Peter Craig and Danny Strong, from an adaptation by Suzanne Collins and produced by Nina Jacobson's Color Force in tandem with producer Jon Kilik. The novel on which the film is based is the third in a trilogy written by Suzanne Collins that has over 65 million copies in print in the U.S. alone.

Thanks to our friends at eOne Films, Cinemablographer.com has passes to give away to sneak peeks of The Hunger Games: Mockingjay – Part 1 for the following screenings:

*All screenings are on Wednesday, November 19th.

Send your answer to contests@cinemablographer.com with the subject “Mockingjay– [CITY].”
(Limit one email entry per person please. Multiple entries will be discarded.)
***Don’t forget to include your city!***