'Coach Has Great Power Over an Athlete’s Life.' 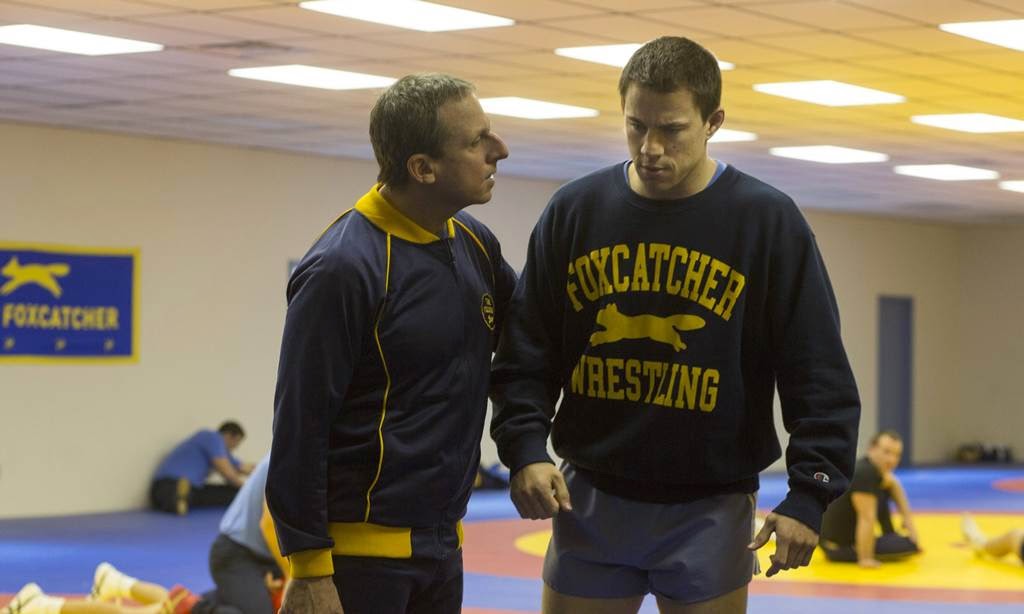 “Coach is a father; coach is a mentor; coach has great power over an athlete’s life,” says John Du Pont (Steve Carell) as he extols his own greatness to the camera whilst recording a documentary about the successes of his self-financed wrestling team. John is coach of the team in name only, acting as the resident Uncle Moneybags funding a team of young wrestlers destined for Olympic gold. The whole ruse of his team, Team Foxcatcher, exists to elevate Olympic gold medal winner Mark Schultz (Channing Tatum) and, in turn, John himself. John certainly has the power over his athlete’s life that he professes, and the bizarre relationship of John and Mark takes the true tale of Foxcatcher into dark corners that few films about the coach/athlete relationship tend to go.

It would be incorrect to dub Foxcatcher a “sports movie” even though director Bennett Miller offers it as his follow-up to the 2011 hit Moneyball. (That one isn’t really a sports movie either, although less obviously so.) Foxcatcher, rather, is an incisive portrait of America’s upper crust, and an unrelentingly cold dissection of privilege and power. The film wholly feels like an all-American take on European art cinema with its militaristic physicality playing out in methodically composed and detached takes that contrast the dreams of the athlete from that of his mentor. Each shot of Foxcatcher is clinically choreographed and marshalled to the point of sterility, but it’s hardly a film that invites or even aspires to the release of emotion.

Miller’s detached camera trains its eye on the brooding and sulky Mark as he struggles to evade the shadow of his coach and elder brother David (a compelling Mark Ruffalo), who is an Olympic gold medalist himself. John seduces Mark to join Team Foxcatcher with a handsome paycheck and promises of autonomy, while Mark unknowingly seduces John in turn with his robust physique and feeble malleability. Foxcatcher immediately establishes John and Mark’s relationship as an unconventional and unusual one, for Mark takes the gig without any concern for John own interest in funding the team. John, a wealthy businessman of the ‘old money’ variety with few athletic inclinations, simply submits that Team Foxcatcher is his opportunity to inspire hope for America and Mark gobbles up the ideology as a pet dog does a rash of bacon.

Foxcatcher plays on divides of class, wealth, and privilege in America with the disparate performances of Carell and Tatum, which become increasingly polarized as the film progresses and the tension between John and Mark magnifies. Carell, sporting a fake nose on loan from Nicole Kidman in The Hours, gives a quietly terrifying performance as the mild-mannered egomaniac. Carell frequently does little in the scene—John is nearly catatonic with propriety and good manners—and he mostly lets his prosthesis do the talking as John observes Mark’s muscly body before chiming “good” and clapping his hands twice. The performance isn’t quite as revelatory as, say, Robin Williams’ dark turns in Insomnia and One Hour Photo, but there’s a simmering menace to Carell’s overly mannered performance that shows how John is a most awkward and dangerous man. John’s inner turmoil arises best in the few moments in which Foxcatcher capitalizes on Carell’s comedic timing and reveals John’s sense of entitlement, compounded with his sullenness and mental illness, which arises best in one scene in which John, high on cocaine whilst flying a helicopter, laughs like a maniac and leads Mark on a string of complicated wordplay. As Carell laughs deviously amidst the dark unsettling tone of Miller’s frame, Foxcatcher shows John’s appropriation of Mark as a kind of sport that provides a perverse pleasure only few can afford.

Tatum, on the other hand, is pure brooding physicality as Mark. Slackening his jaw and loosening his shoulders, Tatum conveys his character’s intellectual and personal insecurities in the midst of men like John or David who carry themselves confidently. Mark practically drags his knuckles on the floor like a Neanderthal as Tatum makes his body so prominent in the film, and Foxcatcher accessibly shows how an athlete like Mark might be prime for the picking by a man like John.

Mark and John’s relationship quickly flies out of control, moving from that of athlete and coach to that of a pool boy and his affluent sugar daddy. Miller frequently accentuates the obvious homoeroticism of wrestling as John observes Mark writhing around in his singlet, and one practicing match between John and Mark fleetingly evokes an image of sodomy, and Foxcatcher toys with the strangeness of John’s hold over Mark as Mark’s obsession with outshining David explodes under John’s spell.

The film simmers with tension as egos flame and obsessions rise, yet Miller frequently restrains the action and tone to be as docile as life on the Du Pont’s grand estate. The detachedness of Miller’s methodical direction makes Foxcatcher palpably allegorical as John’s speeches and frequent boastings about America set the estate as a petri dish for the 1% as he, like his cold mother (Vanessa Redgrave), defines the minds of young men with antiquated visions and values, and, worse, an unwavering sense of entitlement to the lives of others. The film even manages to find a shred of sympathy for John in one awkward moment in which his mother comes to observe the training of Team Foxcatcher and John pathetically borrows the coaching duties from David and leads his athletes on an aimless exercise, all the while shooting glances to see if mommy is watching. It’s perhaps the only blip of emotion in the film—and the moment one pities John is certainly as fleeting as Mrs. Du Pont’s interest in the low sport of boxing—and Carell melts away the John’s evil air and shows the monster to be not the man, but the legacy that breeds men like him.

Foxcatcher screens in Ottawa at the ByTowne until Jan. 1 and from Feb. 21-23.