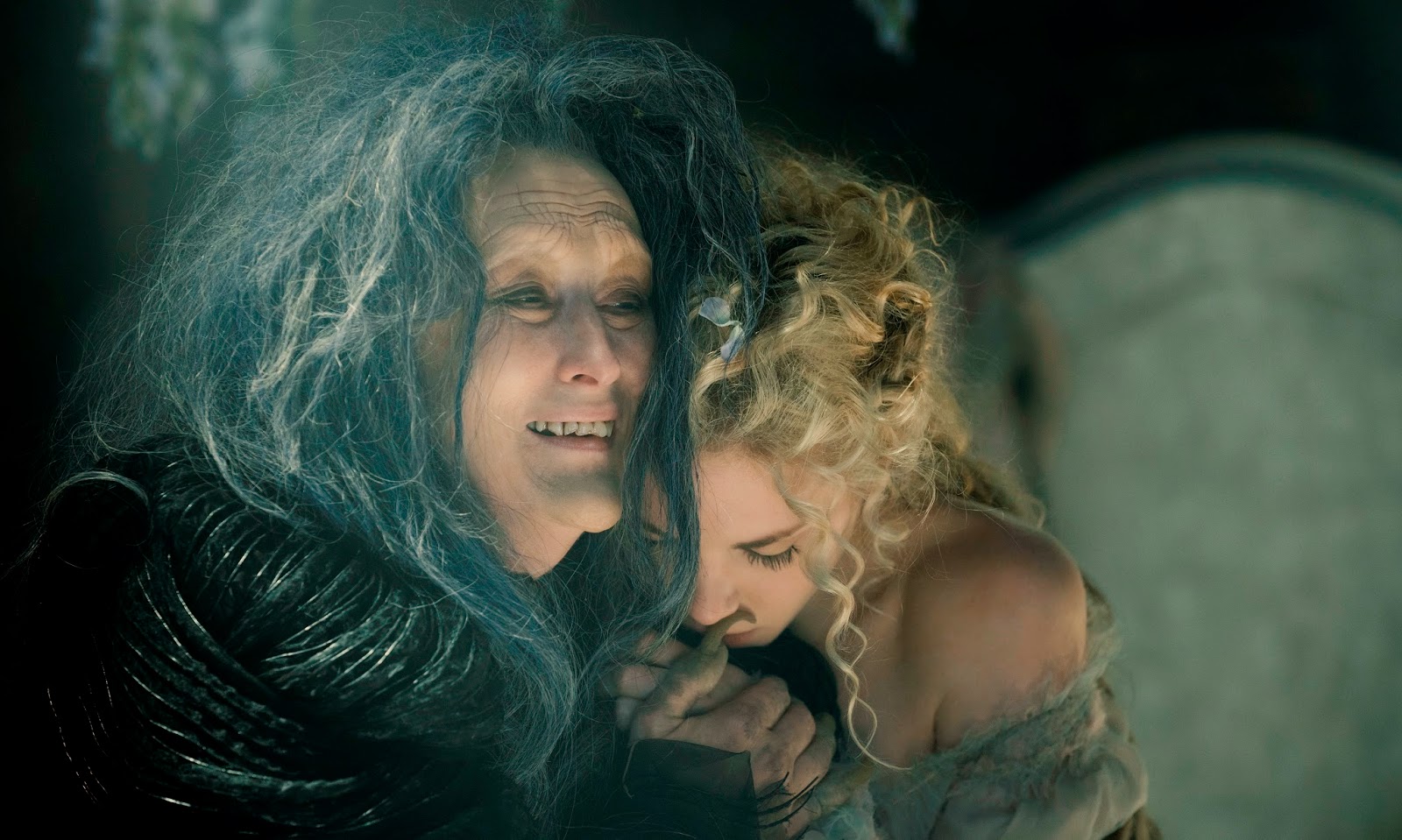 Once upon a time, a movie musical enchanted even the Grinch during the holidays. That movie musical is, of course, Into the Woods, the long-awaited big screen adaptation of Stephen Sondheim’s acclaimed reimagining of fairy-tale folklore. Into the Woods, like any a good fairy-tale, transports audiences to a land of make-believe that enchants throughout every minute of its story. This musical by Rob Marshall (Chicago, Nine) certainly isn’t for all tastes, but anyone who goes to the movies for two hours of fun is bound to love it. Into the Woods is pure magical escapism.


Marshall dazzles in the fairy-tale world almost as well as he does with the backstage pizzazz of Chicago and Nine. (Full disclosure: I’m a true apologist for Nine.) Even if Into the Woods never matches the energy and oomph of Chicago or the cinematic artistry of Nine, Marshall nevertheless directs a top-notch cast and a bouncy production that springs joyously for much of its two hours. The pacing is a bit off, especially in the needlessly overlong third act, and the odd musical number is awkwardly staged, but Into the Woods is whimsical family-friendly fun full of bewitching ditties and visual sorcery, arguably making for the most fully realized of the dark-edged live-action films that Disney has been making of late. (More disclosure: I haven’t seen a stage production of Into the Woods and cannot comment on the variations between the film and its source.)

The film makes a frisky entrance as an extended overture—almost fifteen minutes of toe-tapping introductions—brings all the players of the ensemble through the village and into the woods. There’s the Baker and his Wife (the excellent and spirited pair of James Corden and Emily Blunt) who are tasked with reversing the curse of a crotchety witch (Meryl Streep) so that they may finally enjoy a bun in the oven. The Witch’s recipe demands a cape as red as blood, a cow as white as snow, a shoe of gold, and hair the colour of corn, so Into the Woods mixes a dash of Little Red Riding Hood with a hint of Rapunzel, and all of the audience’s childhood favourites are thrown into the mix.

Cinderella (a delightful Anna Kendrick) runs into the woods and away from Prince Charming (Chris Pine, the film’s most pleasant surprise) while Little Red Riding Hood (Lilla Crawford) runs into the woods to grandmother’s house and the belly of the Big Bad Wolf (Johnny Deep, slimy and sinister), and Jack (Daniel Huddlestone, still in Les Mis mode) trots his milky cow into the woods and into town. There’s almost too many characters to remember as Into the Woods crosses storylines and songs into an interconnect medley, but the sprightly and witty lyrics of Stephen Sondheim and the upbeat editing by Wyatt Smith, plus the team of sharp sound mixers, frequently keeps the film a refreshingly digestible ditty that’s as easy to follow as a storybook rhyme. Most of the early numbers also serve to advance the plot, so Into the Woods, like Chicago, handily overcomes many of the staggering lurches in tone and tempo to which many musical succumb and it cleverly invites the suspension of disbelief that song-and-dance flicks demand. This film is rousing and breezy entertainment.

The songs are often extremely funny, especially the riffs between Blunt and Corden that have a zany slapstick humour. The Baker and the Baker's Wife usually score the biggest laughs as they embrace the looniness of fairy-tale logic in their quest to fulfill the Witch’s demands—the sight of Blunt and Corden sporting Rapunzel’s golden locks like a feather boa never stops being a hoot—while Cinderella lets Kendrick show off more of her pitch-perfect musicality. Depp, on the other hand, finds himself in the film’s most awkward moment as the wolf preys upon Little Red Riding Hood: although Depp looks the part with his pimped-out wolf garb, his voice hasn’t improved at all since Sweeny Todd. His cameo is mercifully brief, but it gives Into the Woods its shakiest moment in the otherwise terrific opening act.

The comedic highlight of the film, however, is “Agony,” the brodown duet between the two princes, played by Pine and Billy Magnusson (the latter plays the prince pining for Rapunzel, played by Mackenzie Maury. The uproariously funny sequence sees the two charmers pining for love atop a waterfall like two lovelorn doofuses, and it’s one of the cheekiest moments in Into the Woods in which the humour probably plays better for the adults in the audience since they’ve come to enjoy blissful lunacies of happily-ever-after and of fairy-tale romance. Into the Woods has lots of fun exploding the nuances and inanities of fairy-tales, and it does so as a toe-tapping riot.

The standout musical number of Into the Woods, on the other hand, is easily the Witch’s ballad “Stay with Me” that she sings to Rapunzel in the tower. Streep’s performance of this number marks the most powerful moment of Into the Woods as the bravado of her vocals inflects the film with both the magic and darkness of fairy-tales, but also with the emotional dynamic that emerges when storytelling is shared between parents and children. Streep’s inflection on the word “wolves,” for example, registers a poignant chord of the Witch’s bitterness as she unfurls a cautionary tale for her daughter about the world being a scary place. The performance brings multiple chills even if one has already watched it a dozen times. The side of the Witch that emerges in “Stay with Me,” however, is also a human one, for Streep reveals the cackling witch to be a wounded and vulnerable character. She might be intimidating with her dishevelled wig and crooked teeth, but the Witch is far more afraid of the woods than her storybook peers are.

Streep outdoes even herself in this central moment of Into the Woods, for the film marks one of her showiest, most playful, and most dynamic performances. “Stay with Me” registers so strongly because the Witch is sinisterly good-humoured in the numbers that precede and follow the song. Streep’s timing and phrasing bring out the best in the Sondheim’s storytelling, while her grandiose presence makes the Witch a villain both caring, conniving, and terrifying. (Her cabaret-like performance of “Last Midnight” in the film’s final act might be the only rival for “Stay with Me.”) Streep, sporting some of the most impressive and elaborate make-up yet from her long-time collaborator J. Roy Helland, has oodles of fun twisting the Witch’s gnarly fingernails, gnashing her broken teeth, and wrinkling the many creases of her brow. Into the Woods once again shows how deeply Streep disappears within the make-up of a character and how much she uses the tools to enhance her performance. Just look at how much fun she has as the sexy incarnation of the Witch in the latter half of the film. Streep’s larger-than-life performance boasts a grand theatrical flair: it’s Broadway meets the cinema, perfectly nuanced and dynamic, and she entrances the viewer with her magical spell.

Equally magical is Marshall’s exquisite vision for the world of woods. Into the Woods, like Chicago and Nine, embraces its theatricality and refers to the roots of the mystical trees that form its world. The film signals its theatrical origins especially well in the brisk retelling of Little Red Riding Hood’s escape from the belly of the wolf, for Marshall sits Red and her granny in a big material tummy that asks audiences to suspend their disbelief in this early moment of the film. The wolf’s expressly theatrical costume—gloves, wolf whiskers, and human face—also let the film play nicely into an in-between place of film and theatre as Into the Woods grows increasingly cinematic as it evolves and introduces the CGI world of Jack’s beanstalk and the giants that follow. Atmospheric cinematography by Dion Beebe and inspired costumes by Colleen Atwood balance the lightness and darkness of the comedic and fantasy sides of Into the Woods, too, while the visual effects frequently work in the service of the film since Marshall generally withholds them, keeps them at the side of the frame, and lets one’s imagination do the work. Into the Woods is enchanting magic, which is what every fairy tale—and musical—should be!

Into the Woods is now playing in wide release.

What kind of spell did Into the Woods cast over you?