Whittling down a top ten list won’t be easy this year! More notes from the screener pile, including two of the best films I’ve come across so far: 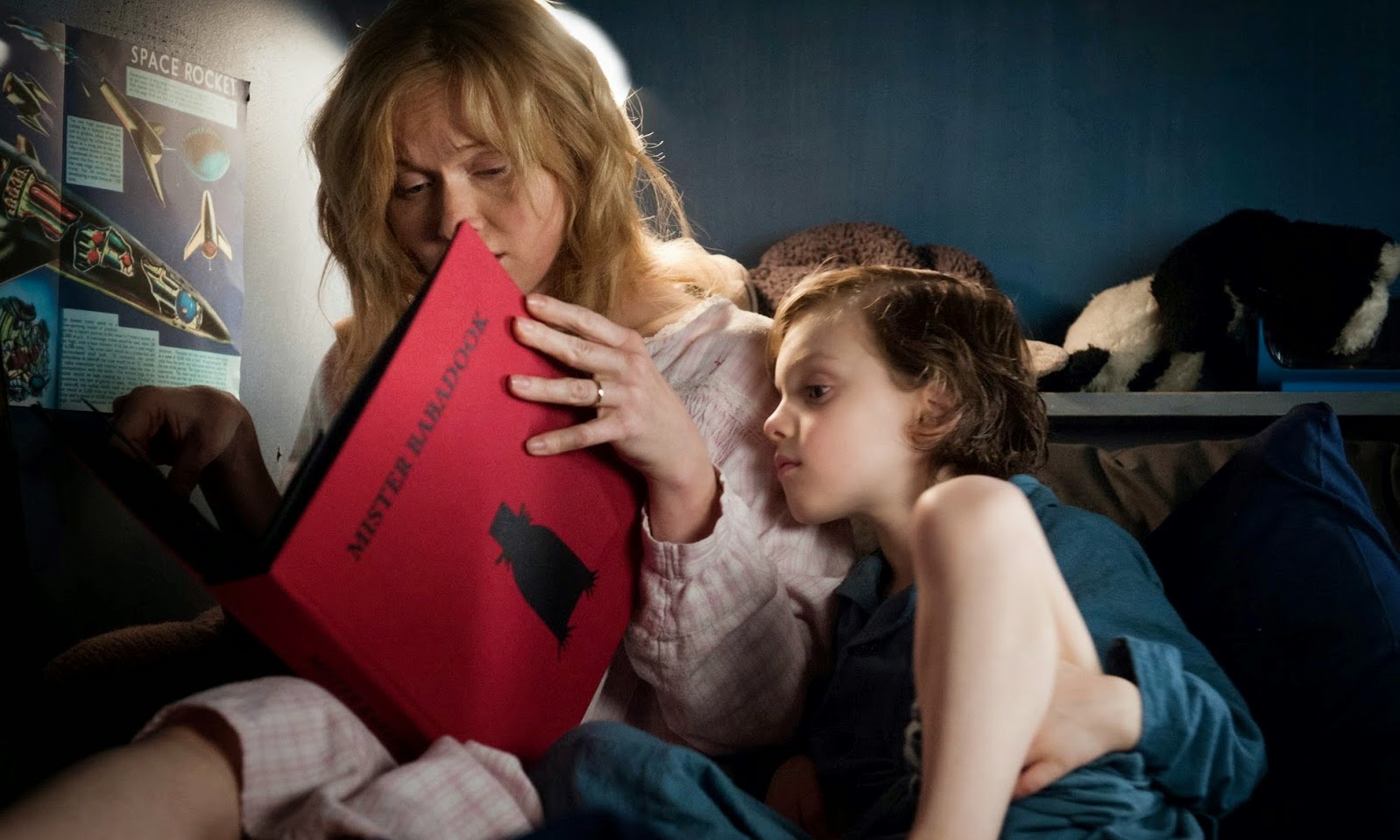 I remember this time when I was in elementary school and foolishly stumbled upon a copy of Dracula while waiting for my mom at the library. I skipped around in the book to read the scary bits and it gave me the heebie jeebies. I spent nights under the covers reminding myself, “It’s only a made up story.”

“It’s only a made up story,” however, might be the most powerful idea that a horror film can use. Imaginations play games on us, especially in the wee hours of sleepless nights in which there’s nothing else to do but let the mind run wild. There’s no stopping the little fears that expand in the imagination as it grows weary. There’s no stopping The Babadook, either, as mum Amelia (Essie Davis) and her son Samuel (Noah Wiseman) discover a grisly children’s book that strikes fear in both of them with its gruesomely playful cadence.

The Babadook proves Jennifer Kent one of the breakout talents of the year with this extraordinarily terrifying horror film. The Babadook deserves to become a classic of the genre: it’s frighteningly scary—as intense a film experience as a horror film can be—as Kent strips back the greatest comforts of domestic life and puts the viewer through psychological hell in what is usually the safest zone of them all: the bedroom.

Don’t hide under the covers when Mr. Babadook scares you, for this shadowy boogieman feeds on the fears that lurk in the shadows of the night. Masterful cinematography and direction let the viewers create the creepy Babadook in their own minds as Amelia grapples with murky visions. The film’s far scarier than most horror films, since Kent knows that horror often works best using silence and offscreen terror: Embed the horror in the mind of the viewer, and there’s no shaking this terrifying experience.

The Babadook falters only as it approaches its climax when Kent treads into conventional filmmaking and lets the audience see Mr. Babadook. If the scene only played as a reaction shot on Essie Davis—her utterly mesmerizing, go-for-broke performance is astounding—The Babadook could be a genre masterpiece. (Although it’s still the best horror film since The Others.) The Babadook redeems itself with its unsettling ending, however, which toys with the idea of how willingly we accept these little horrors into our lives and feed them with our insecurities. There’s no stopping The Babadook!

The Babadook is now on VOD and in limited theatrical release in the USA from IFC Films.
(It is currently awaiting release in Canada from eOne Films.)

Stray Dogs
(Taiwan/France, 138 min.)
Dir. Tsai Ming-Liang, Writ. Peng Fei Song, Tsai Ming-Liang , Chen Yu Tung
Starring: Shiang-chyi Chen, Kang-sheng Lee, Yi Cheng Lee
Stray Dogs is an exercise in patience. Director Tsai Ming-Liang displays a full grasp of the temporality of the long take, so Strays Dogs contains masterful strokes and shifts in tone simply by holding the camera for arduous stretches of time. One unblinking shot causes ennui as characters literally sit there and do nothing. Sometimes they pee and sometimes they eat chicken. Other shots, though, are furiously uncomfortable—experience frigid, restless outbursts as Strays Dogs trains the camera on a father (Kang-sheng Lee) standing still in the blustery rain as he holds a sign that advertises rental rates as cars whiz by and splash water over his poncho. Stray Dogs is hellishly uncomfortable when Ming-Liang wants it to be and it is excruciatingly placid similarly.

Stray Dogs is brilliantly painful in one particularly spectacular long take in which the father wakes up, drunk and confused, and discovers a doll made out of a large head of cabbage that his daughter has brought into their bed. He investigates said cabbage for a few minutes—“Why is it looking at me?” his bewildered eyes ask—before he full on attacks the cabbage, tearing its eyes out and feasting on it gluttonously and violently while his daughter sleeps beside him. It’s pure hell to watch.

Other moments are equally surreal, like a nightmarish escape by the riverside or the bizarrely inhospitable cave in which a lonely grocery clerk welcomes the family. The most surreal stretch of Stray Dogs, however, might simply be the extended moment that showcases the two performances by Shiang-chyi Chen and Kang-sheng Lee in which the clerk experiences a resigned defeat and she stands helplessly for at least ten minutes while Ming-Liang shows the father’s drunkenness evolve in real time. Stray Dogs vividly recreates a sense of lived experience through its observational style as the direction traps the viewer into being a passive observer to the breakdown of a family as Ming-Liang forces audiences to watch the father’s rampant alcoholism tear apart the family. 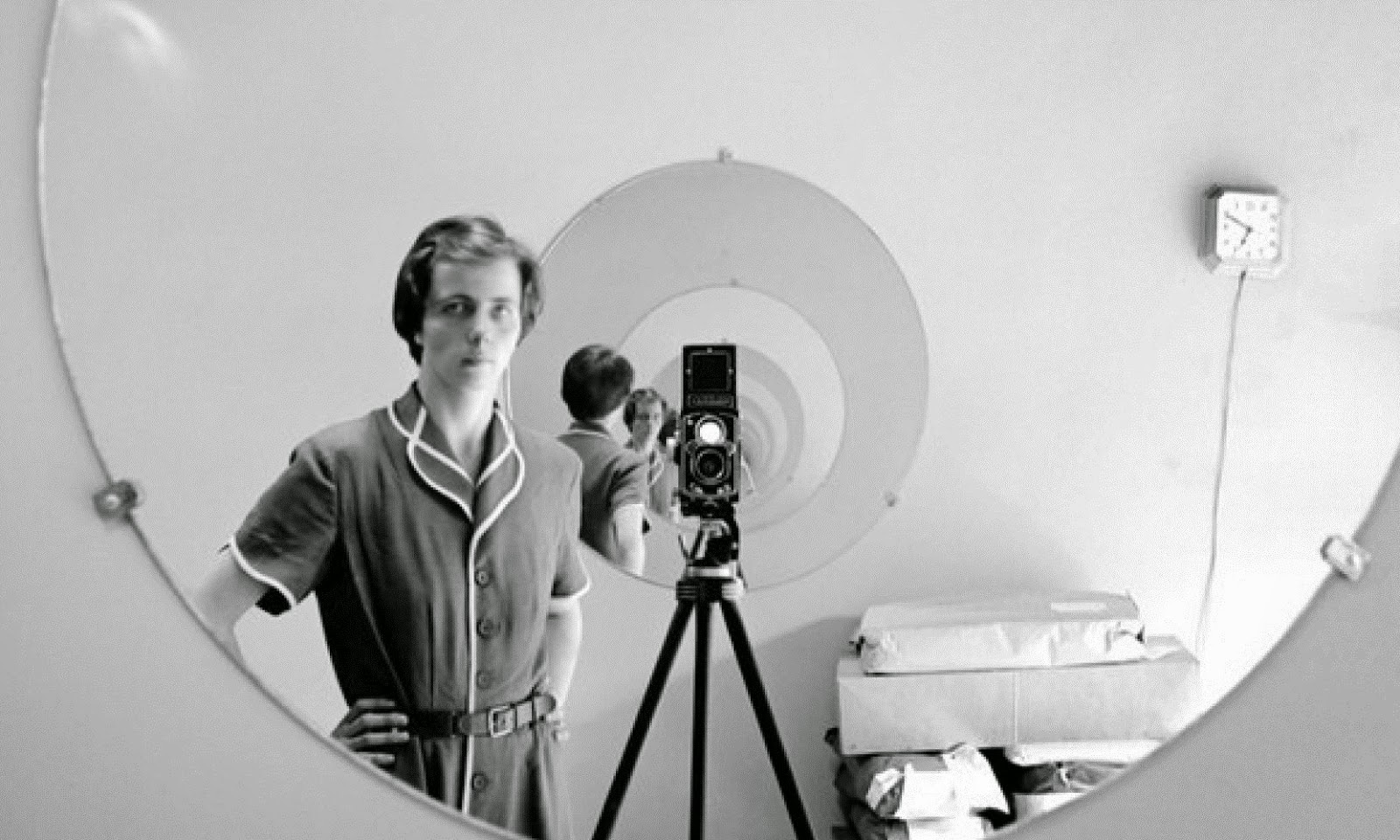 Does a picture tell a thousand words? They might, although they’re better at evoking words than saying them. Imagine thousands upon thousands of words that tell us very little, but even upon first glance one knows that they really say a lot.

So goes the predicament of photographer/historian John Maloof when he stumbles upon an unusual archive of photographs and negatives. The work, street photography of Chicago, is all done by one unknown photographer by the name of Vivian Maier. Maloof explains that such impressive work by such an unknown talent is a mystery, and the enigma of Vivian Maier becomes even greater when a quick Google search reveals nary a fact. It’s as if this woman took pains to hide her existence, yet tucked away in various chests and boxes lay these extraordinary snapshots of her existence.

Finding Vivian Maier takes Maloof on a wild treasure hunt as he discovers the story behind this hidden talent. Somewhat in the vein of Searching for Sugarman does Finding Vivian Maier create a portrait of an unsung genius as Maloof tracks down the exhaustive array of people with whom Vivian was in contact during her life. It turns out that she was a reclusive nanny who loved to take pictures whilst strolling through the city with the kids, snapping pics like a photo-voyeur, and finding inspiration in the most mundane corners of the streets.

Maloof and director Charlie Siskel create a breathtaking portrait of this eccentric artist by weaving still images of Vivian Maier’s photography with interviews that convey a sense of the woman through a remarkable collage. Vivian Maier is a puzzle of many indecipherable pieces, but the filmmakers let viewers appreciate the true artistry of her work by allowing them to experience it both with and without context. Maloof presents images upfront while he himself seems to know little about Maier and he then situates the mysterious photographs within Maier’s eccentricity and artistry with the interviews. A great subject meets expert storytelling, so Finding Vivian Maier builds an engrossing character study that extends to some of her work’s larger implications the more increasingly deep and dark her personal story becomes.

The film presents a bittersweet feat of discovery since Maier’s work is so beautiful, yet so unheralded and largely by her own wishes. Finding Vivian Maier uses Maier’s story—especially her loneliness—to invite larger debates about the role of the archive in art and of the canon that frequently excludes such great, if unconventional, voices. The films asks what good is such a knack for photography if all the work just sits in the box, for it positions Maier’s work within the context of other artists whose work sits by the wayside either through institutional or personal choice. Maier’s work is undeniably significant, though, and the dynamics of her personal story grant the photos more depth and mystery than most works in the established canon. This playful dive into the archive is an extraordinary portrait of an artist and an even greater treasure trove that houses many foundational questions of art. Finding Vivian Maier is a moving and absorbing visual tapestry—it’s simply one of the year’s best films.


Finding Vivian Maier is now available on home video in the USA from IFC Films and in Canada from Films We Like.