A Cabin in the Woods and a Little Blue Puppet 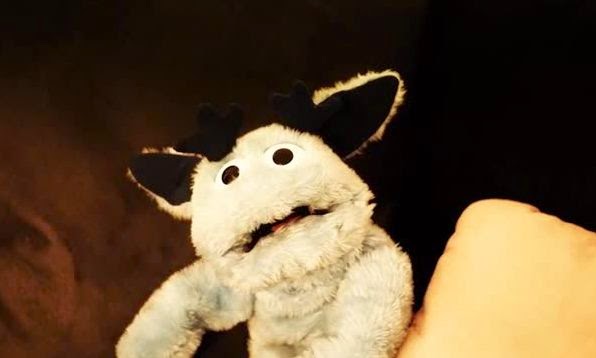 Several of Ottawa’s film challenge regulars combine forces for the feature-length horror-comedy Ragnarock’s Cabin. The passion of the cast and crew is on full display in Ragnarock’s Cabin, as it always is in the works of filmmakers at events such as SPARTA, Digi 60, and the like, so it’s fun to see what local filmmakers can do when they step outside the parameters of the film challenge scene. Time limits and catch criteria may sometimes seem restrictive, but they are also great tests for the creativity and resourcefulness of filmmakers. Ragnarock’s Cabin shows some of the strains and successes familiar to shoots in which filmmakers create films on the fly with available resources as members of Ottawa’s amateur film scene take the next step in a game of Scary Movie meets Blair Witch.


Ragnarock’s Cabin trots a newlywed couple, Jennifer (Mel Guibz) and her doormat of a husband Stanley (Dan Desmarais), out to a cabin in the woods, which—gasp!—has also been double booked by five friends. The friends are uneager (understandably so) to share cabin with a bride and groom keen to consummate their marriage, especially since the bride wears her wedding dress all weekend as if she’s been shocked by some kind of marital trauma and doesn’t know how to react. Well-trodden slasher movie peril, however, leaves the gang stuck by the lake with no car and communication. Then, one by one, the vacationers start to disappear until death do them part.

This film by director Kevin Straw and writer Glen Sloane has a lot of fun with horror movie clichés as it slices and dices the cabin guests and other unsuspecting victims in ridiculous deaths and awkward follies. The gang at the lake has a bit of cabin fever, which makes them extra loony, although nobody seems especially concerned that a serial killer is on the loose. They do anything and everything that a person in a horror movie should not do, like have sex or split up, and they shout the rules of horror movie mayhem in grand declarative sentences to keep the monsters at bay. Everyone is in on the joke, though, so the intentional cheese of Ragnarock’s Cabin makes for self-referential B-movie fun.

Ragnarock tells audiences not to take the murder and mayhem too seriously with the addition of a furry little critter who may or may not be some cuddly force of evil. Said critter is Stanley’s stuffed animal—the man has serious issues—and it comes to life every now and then to spy on the would-be victims and open its little puppet mouth to gasp in horror/offer a cackling laugh at the peril to come. Ragnarock is clearly a film crafted by movie lovers as the cast and crew offer nods to camp classics, and it’s fun since the passion and the element of play are both clear.

The film carries the regular enthusiasm from Ottawa film scene, but it also struggles to overcome the modest circumstances of its production. Ragnarock, even for a microbudget DIY affair, sometimes entangles itself in its own shoestrings as the awkward cinematography stifles the film with bland lighting and compositions—more shot variation might have brought the film to life—and the poor audio frequently muffles the dialogue. The script, on the other hand, is tonally uneven since some of the self-referential hijinks are decent parodies, while other scenes, like the murderous brother or even the puppet himself, are too random and out of whack to further the fun. The performances are equally mixed with Guibz, Vincent Valentino, Evan Gillmore and Angela Parent enjoying notable screen presence, while others (we won’t name names) either play with their hair like a Bollywood vamp or, worse, awkwardly mug for the camera and ham it up a bit too much. Some of Ragnarock works and some it simply doesn’t, but everyone making the movie is clearly having a good time.

Ragnarock’s Cabin, however, frequently harnesses the limitations of the production for the spoofy spiritedness of its B-movie charm. The cheese has a distinctly local flavour, so Ragnarock’s Cabin is fun for what it is: an amateur tip of the hat to the spirit of moviemaking from some local movie lovers.

Ragnarock’s Cabin is now available on Vimeo on Demand.