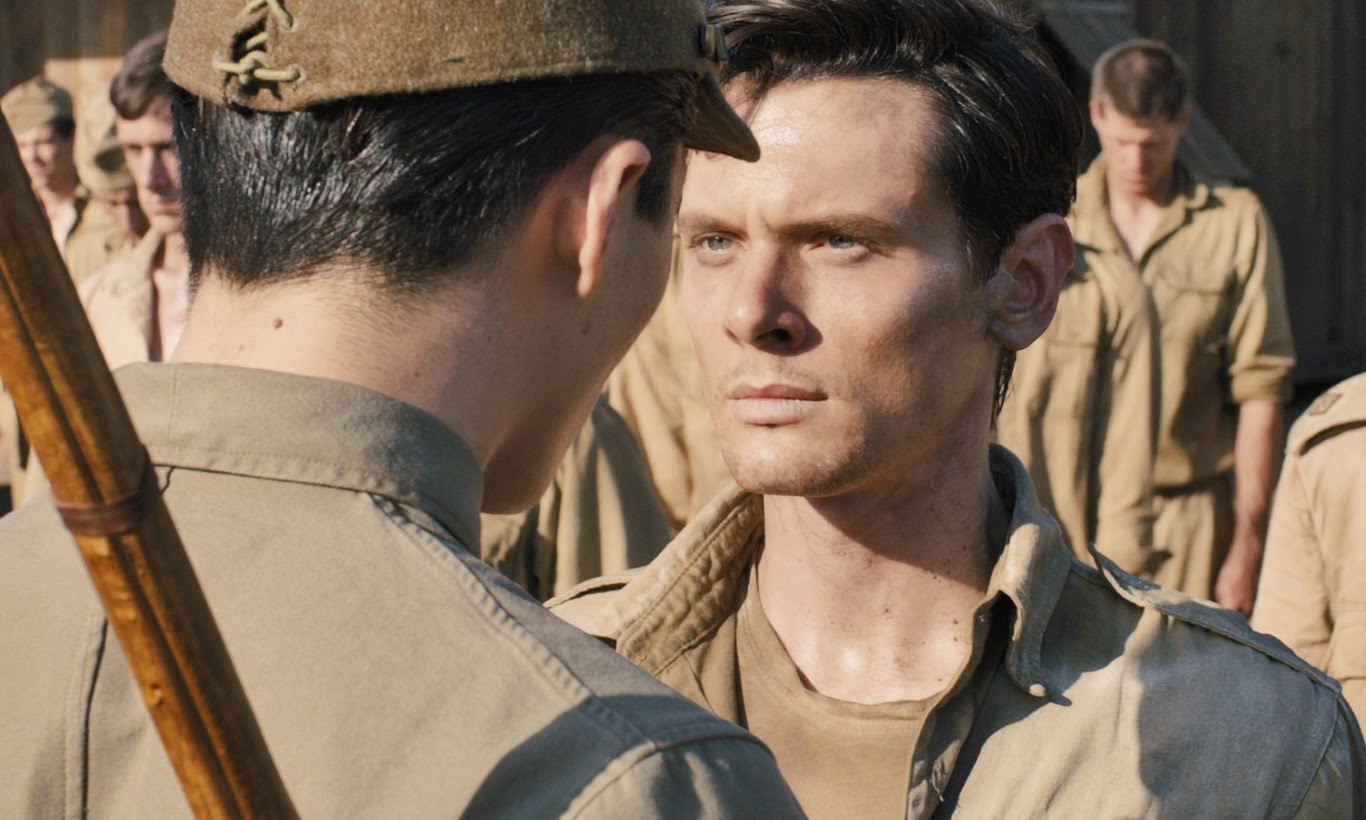 “If you can take it, you can make it,” says a classmate to a young Louie Zamperini as he trains to become a runner. The philosophy of Louie’s schoolmate rings throughout every frame of Angelina Jolie’s Unbroken as the elder Louie (Jack O’Connell) takes strides as an Olympic runner and then leaps over greater hurdles during his years as a prisoner of war. Unbroken finally comes to the screen with significant anticipation and a burden of heightened expectations that are almost unfathomable to bear, but Jolie’s impeccably crafted adaptation of Louie Zamperini’s story largely meets them. If Unbroken can take it, it can make it.


This ambitious sophomore feature by Jolie whizzes through Zamperini’s story even faster than the late Olympian could run. Screenwriters Joel Coen and Ethan Coen, Richard LaGravenese, and William Nicholson (working separately on various drafts) make an admirably condensed narrative out of Laura Hillenbrand’s excellent book Unbroken: A World War II Story of Survival, Resilience, and Redemption and they largely succeed on their efforts of playing Sophie’s Choice with the various stages of Zamperini’s tumultuous and inspiring career. Sifting through such an exhaustingly researched and detailed text is an unenviable task, since virtually every detail and parenthetical reference seems essential for building Zamperini’s story as a heroic all-American fable of a generation that refused to be lost at sea.

This well-paced film starts with a riveting aerial sequence that foreshadows the adventure to come as Louie and his fellow soldiers combat Japanese warplanes high in the sky. A quick flashback to Louie’s past introduces his rascally attitude and drive to succeed, while his adolescent years warm up for a thrilling final leg as his career as an Olympic runner takes Unbroken to a quick interlude at the Berlin games before Louie faces his longest endurance test of all when he and two of his fellow airmen are stranded at sea before wading into the clutches of the Japanese army.

The film, like the book, plays a bit like All is Lost meets The Railway Man as the latter two acts see Louie push his spirit to the limits. The scenes in which Louie and his fellow soldiers Phil (Anna Karenina’s Domhnall Gleeson) and Mac (Finn Wittrock, Noah) endure hell at sea even worse than that Robert Redford faces, as Jolie captures the brutal aimlessness of their drift in the ocean. Louie, battling the elements, pledges his life to God if he survives this odyssey and it’s in this chapter of Unbroken that Jolie’s film really hits its stride. The heat, hunger, thirst, and—worst—the psychological isolation of being stranded on the raft in enemy waters all make this second chapter of Unbroken truly riveting. The fear of encroaching death cripples one castaway while strengthens another, so Jolie pulls out the resilience of Louie’s remarkable spirit by drawing on the nature of human frailty matter of factly and sincerely.

When Zamperini goes into the camp under capture, however, Unbroken continues its dutiful portrayal of Louie’s indomitable spirit, but the latter act of the film isn’t quite as powerful as the chapters that precede it. Louie meets the greatest adversary of his plight in the form of a sadistic prison guard named Watanabe, dubbed “The Bird” by the POWs, who picks Louie out from the crowd due to his celebrity and his obviously superior strength, both physical and mental. If The Bird (played by Japanese rocker Miyavi) can break Louie, he can claim the authority to which he aspires, but clearly falls short.

Miyavi does a commendable job in delivering an honest portrayal of the cruel prison guard. The character, who reads like a monstrous force akin to Anton Chigurgh in Hillenbrand’s book, has an unrestrained psychosexual ferocity in his sadistic bullying of Louie, and Miyavi’s take on the character is a subtly celibate weirdo who derives pleasure from making his prisoners squirm. Louie takes several whacks to the ear with a stick of bamboo and, in one near-Biblical test of endurance, he stands strong when The Bird summons each prisoner to line-up and punch Louie in the face one by one. Unbroken faithfully dramatizes the hell Louie endured in prison at the hands of The Bird, and his final feat of strength, his defiant refusal to let his tormentor break him, is a fitting climax for the portion of Louie’s life that Unbroken chooses to contain in its feature running time.

There is so much more to the story, though, that readers of Hillenbrand’s book must know and even those unfamiliar with the story must sense. Unbroken sometimes feels too controlled with its unoffending portrayal of life in the camps. The film touches upon everything—poor waste facilities, brutal living conditions, and a plot to kill The Bird (despite many reports, this element of Louie’s torment most certainly receives a mention, albeit a very fleeting one)—but it tackles so little of them substantially that the section in the camp doesn’t afford the grit Unbroken needs to maximize its catharsis. The film is 137 minutes and it barely feels as if it’s an hour long—and that’s a testament to the skillful cutting of William Goldenberg and Tim Squyres, who deliver the finest classical Hollywood editing since Argo—so Unbroken could have cut a little deeper into Louie’s epic test of faith. Unbroken uses its running time so economically, though, that one wishes the film had more blood—both literal and metaphorical—to make Louie’s journey as emotionally turbulent and exhausting for the audience as it was for him.

Unbroken nevertheless remains a significant achievement for Jolie in her second turn as a dramatic filmmaker. Facing a bar of expectations more weighty than that with which Louie defies The Bird can’t be easy, especially when the subject himself has recently passed, the source material is so acclaimed, and the commercial elements of studio filmmaking restrict greater artistic risks. If Jolie’s first feature In the Land of Blood and Honey is a rougher production, it’s still a sweeping love story that shakes one cold with its unflinching heft, yet while Unbroken is thematically safer than Honey is, it shows much progress. Jolie moves to a significantly larger canvas than that of her previous film, choreographing epic action sequences on land, air, and sea, while zeroing in on intimate moments of suffering that give her subject strength. If her previous film plays like that of an ingénue finding her groove, then Unbroken plays like a finely-tuned work by a confident pro—Unbroken, in short, is Jolie’s Clint Eastwood film, and her economically seamless realization of Zamperini’s story probably has a level of finesse and spirit she learned from watching the likes of Clint behind the camera.
Unbroken gives Zamperini a counterpart that embodies the admiration and esteem that Jolie clearly has for her late subject. Jack O’Connell’s performance as the courageous Louie Zamperini is one of those breakthrough turn that commands the screen and all but guarantees stardom. Unbroken tasks O’Connell with a largely physical performance as he endures various degrees of suffering, but it also challenges him to use the strength of Louie’s Olympian body as a forceful display of his unbreakable spirit. O’Connell’s unwavering performance sells this unabashedly inspiring film with conviction. The supporting cast, especially Gleeson and On the Road's Garrett Hedlund, are admirably solid.

Jolie, moreover, certainly knows how to use a camera to fill her canvas with visual strokes. The cinematography by Roger Deakins is breathtakingly exceptional: the lighting in the POW camp makes the rising sun of Japan a soul-stirring sight in such a seemingly godless place. It feels as if a higher power watches over Louie thanks to the heavenly lensing—let’s face it, Roger Deakins IS God as far as cinematographers go—so on one hand it feels unfair to fault the soft edges of Unbroken since Jolie’s direction favours the light of Zamperini’s tale rather than the darkness from which it emerges. Compare Honey to Unbroken, and the latter film exceeds the technical prowess of her last effort in almost every regard, so virtually everything Unbroken does deliver is immaculate to no end. Jolie, like Louie, will definitely make it.