'Cake' And Eating It Too 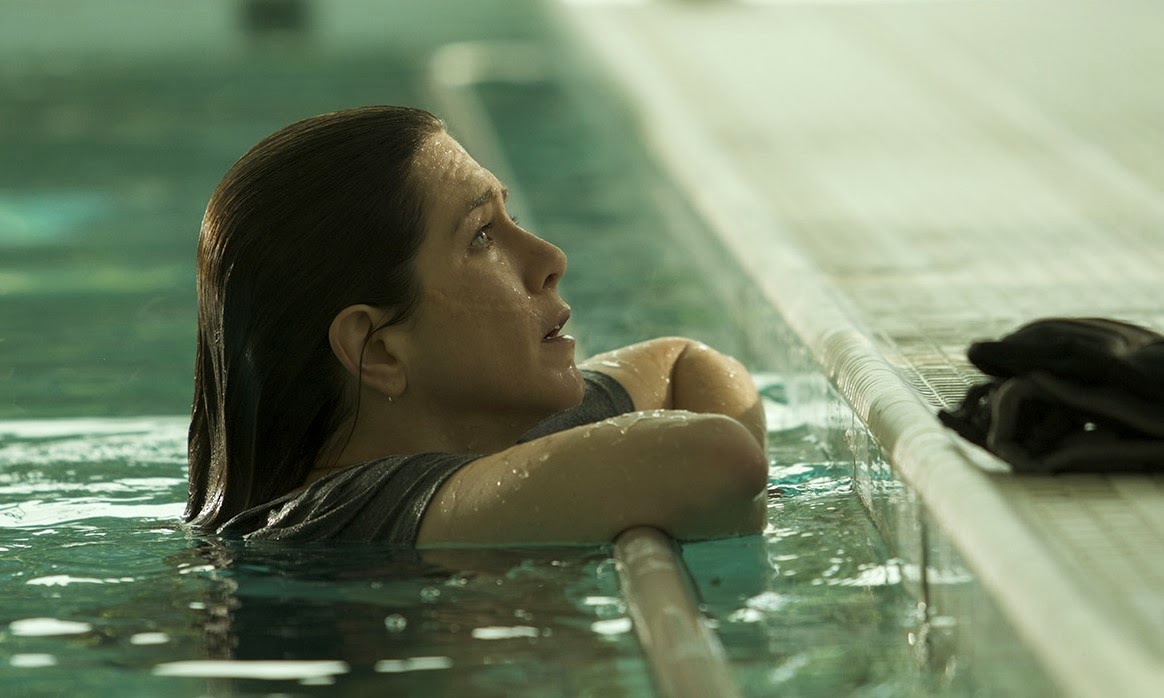 Last week’s Oscar nominations brought disappointing news for Jennifer Aniston and her fans when the former “Friends” star missed one of five Best Actress slots for which she had aggressively campaigned during the award season grind. She still has nominations from the Golden Globes, the Critics’ Choice, and the Screen Actors Guild, so no Oscar nomination doesn’t mean that Aniston can’t have her cake and eat it too. Going from the darkest horse of the race to the number one snub isn’t an easy feat and Oscar/film history might be kinder to Aniston’s turn in Cake since she missed out with the Academy. Enjoy Aniston’s work in Cake as a strong performance in its own right and not simply as another box to tick off on the Oscar cheat sheet. Cake showcases one heck of a performance from Aniston and it’s a testament to her range and skill alone that her film made it this far since debuting at the Toronto International Film Festival in 2014.

Aniston almost deserves an award for taking Cake so far, simply because the film itself isn’t anywhere on par with her performance. Films about suffering and depression aren’t easy to handle—when they work, they work, and when they don’t, well, they’re a slog—and Cake is almost unbearably grim as it follows Aniston’s Claire on the road to healing when she becomes obsessed with the suicide of Nina (Anna Kendrick), one of the members of her support group for chronic pain. Aniston winces in agony as Claire suffers every kind of pain imaginable—the scars covering her body are just as symbolic as they are physical—and Cake wallows in the unhappiness of its central protagonist. Claire might be the angriest, bitterest, bitchiest character to grace the screen without giving the audience any wiggle room for redemption, but she’s a remarkably humane character even if she’s impossible to like.

Getting over grief isn’t easy, though, so Cake, thankfully, doesn’t dip into the over-tread waters of sufferers overcoming obstacles to find the joy and happiness that underlie their pain and misery. Claire is simply miserable and she certainly seems to have earned that right with each bit of her backstory that Cake reveals. The script by Patrick Tobin sometimes feels a bit too calculated with its withholdings and the timing of its revelations—forced subtlety is a peculiarity that Cake sprinkles on a bit too much—and the odd contrivances that work to Claire’s benefit, such as her relationship with Nina’s widower (Sam Worthington), don’t do Cake many favours since they often ring false despite the best efforts of Barnz and his cast to deliver them as authentically as possible. Why anyone would put up with her Claire is a mystery, since she mistreats everyone around her and manipulates them in turn, and the character seems as far away from Rachel Green as one can be.

It isn't easy to sell a film on such an unlikable character, yet Aniston elevates the film with her brave and vulnerable performance. It's a stretch to call Cake her Monster, since she'll always have The Good Girl--but Aniston rejuvenates herself with this raw dramatic turn. Drab and without a hint of make-up, save for her scars, she gives a dynamic show without a hint of self-consciousness. Her impressive physical performance carries the nuances and afflictions of living with such deep physical pain daily and the itch of Claire's drug addiction. The few moments in which Claire lets down her guard and exposes herself to the audience give Aniston some revelatory moments to convey the emotional pain that Claire carries following the trauma that caused it.

Aniston dares the audience to dislike Claire with all her self-loathing, eye-rolling, and unrelenting self-pity, but she also makes her more relatable and worthy of forgiveness the more one tires of seeing Claire so mad at the world. Aniston’s especially good when Cake calls on her to inject Claire’s acerbity with the comedic timing she developed on “Friends,” for Claire’s biting sarcasm and barbed remarks build walls between Claire and her peers onscreen while revealing to the audience the character’s desperate guardedness. Everyone’s probably encountered a Claire at least once in their lives, and if Claire can’t shake anything off, her imperfections make her a far more forceful character as she chooses to live with the pain instead of trying to hide it.

Claire’s coldness feels cruelest when she takes for granted her housekeeper Silvana (Babel’s Adriana Barraza), who sticks with Claire during the most difficult year in her life. Silvana, an effective surrogate for the audience, gets some of Cake’s highlight scenes as she protects and supports Claire, and the subtlety of Barraza’s performance is extremely effective. As Cake gradually reveals more of Claire’s story, Silvana shows the audience that she, too, experienced a devastating loss on the day of Claire’s accident, but she hardly has the luxury of marinating in her pity as much as her employer does. Barraza deserves as much praise for Cake as Aniston’s receiving, since she’s just as heartbreaking and hilarious. Barraza’s a standout in a strong supporting cast that does its best to make Cake rise above its downer of a character study. Even if the film stands as Aniston’s show, though, that’s a fine way to slice it since Cake offers one of her best film performance to date.

Cake is now in theatres from D Films.
It screens in Ottawa at Landmark Kanata and SilverCity Gloucester.