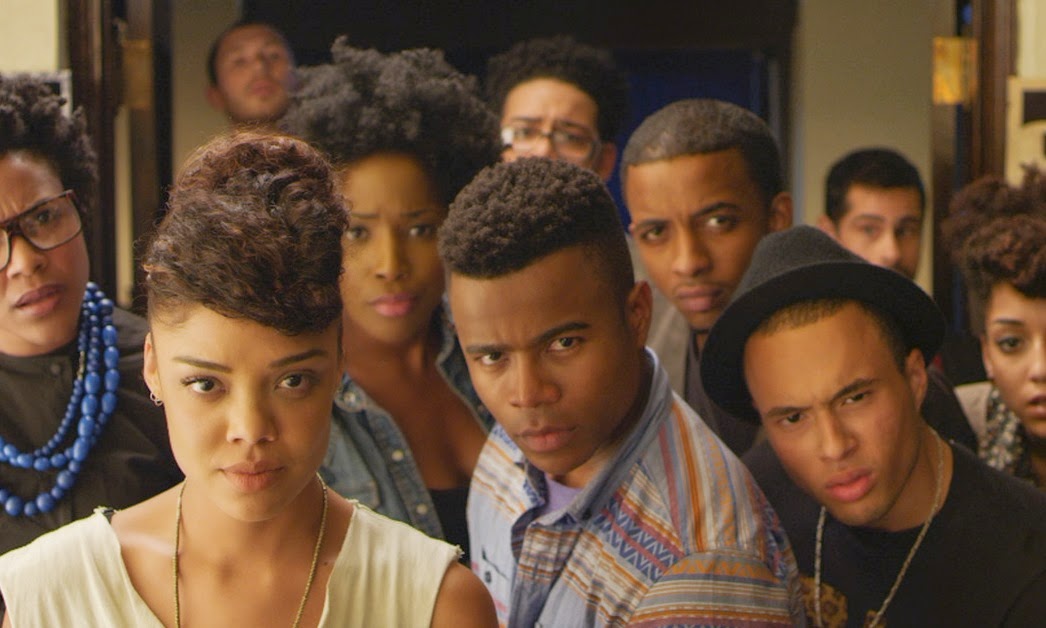 The awkwardness of the Queen’s Halloween costume, which is actually a pretty great costume if one thinks about it aside from the obvious you-should-have-known-better guffaw, shows how well Dear White People gets it right in terms of its depiction of campus life in this supposedly post-racial age of hypersensitivity and political correctness. It’s a smart, witty, and articulate satire about the difficulty of moving beyond issues of race when some elusive, intangible pocket of culture says that we’ve moved beyond racism in the days of affirmative action and Obama. Everybody’s a little bit racist, shouts Dear White People with its loud and confrontational humour. There’s as much truth to the satire here as there is in a song from Avenue Q, and Dear White People hilariously dramatizes the fact that tensions of race are still sharp if only because they’re such a core of larger cultural identities.

Leading the charge is campus broadcaster Sam White (Selma’s Tessa Thompson) who runs a campus radio show called “Dear White People” in which she calls out the pervasive racism on her predominantly white campus. The problem with Sam’s show, however, is that it itself is vehemently racist, for Sam pools white people into a homogenous mass of over-privileged, self-serving racists. She’s articulate and funny, especially as played by Thompson’s star-in-the-making turn, and there’s an undeniable grain of truth to the observations on race she preaches into her microphone with well-cadenced anger.

Also sending her voice out to the masses is Coco (played by Teyonah Parris, aka Don Draper’s secretary Dawn on “Mad Men”), a vlogger/reality show wannabe who lays into YouTube with feisty observations on campus race relations and, more dramatically, saucy counterarguments to Sam’s show. Parris easily gives the standout performance of the film in the funniest and sassiest turn of Dear White People. She’s also best at capturing the bottled-up contradictions that characterize the creations of writer/director Justin Simien. Poised like a wannabe Betty Draper, Coco carries an overly affected awareness of her blackness that Sam treats as a kind of treason. Dear White People boldly takes the idea that race itself is a performance, and various facets of the ensemble either explode these stereotypes or work them against the grain.

The two key black males on campus, Lionel (Tyler James Williams) and Troy (Brandon P. Bell), are themselves caught in dual/binary identity clashes, but neither one is quite as interesting or as humorously confrontational of those of Sam and Coco. Lionel, for one, struggles to fit in anywhere on campus since he’s a gay black hipster, while Troy, the son of the Dean (Dennis Haysbert), aspires to public office but can’t quite shake the ongoing black-and-white rivalry between his father and the school President, Fletcher (Peter Syversten), which extends to a Capulet/Montague type rivalry between Troy and Fletcher’s racist son, Kurt (Kyle Gallner), and daughter Sofia (Brittany Curan), whom Troy is dating. Dating a black boy just to make daddy angry is one of the many “Dear White People” letters that Sam sends over the airwaves (naturally, she’s Troy’s ex), so everyone’s connected in a game of interracial criss-crossing.

Everything explodes when a campus house holds a blackface Halloween party, which, as the end credits show, is rooted in reality, and all the white folks validate Sam’s on-air Black Panther mantras. Dear White People frequently barbs its arguments and declarations on race like arguments in a term paper, rather lines of a film, but it’s often riotously funny for the honesty that infuses its satire and, as a freshman film from Simien, it’s quite impressive. People, especially young people who consider themselves progressive, still don’t know how to handle or approach questions of race without being offensive, either overtly or implicitly, and the film’s edgy take on the pulse of Obama-age youth is winningly perceptive.

Dear White People sometimes feels too contradictory for its own good as every character is a little bit racist and hypocritical with the way they present and perceive themselves, but Simien is shrewd enough to capture the complexity of contemporary relations and show that the problem lies on all sides of the spectrum. Yes, the oppression and characterization of minorities by whites is certainly the worst of offender—and every cut-and-dry Cracker of Dear White People feels authentically on point—but there’s a long way to go an all sides. Dear White People feels especially relevant now following the controversy of the racial representation in the film industry, and it’s a welcome and necessary satire for audience to see now more than ever. This promising debut holds a hilariously perceptive mirror on the way things are today.

Dear White People is currently playing in Ottawa at The Mayfair.