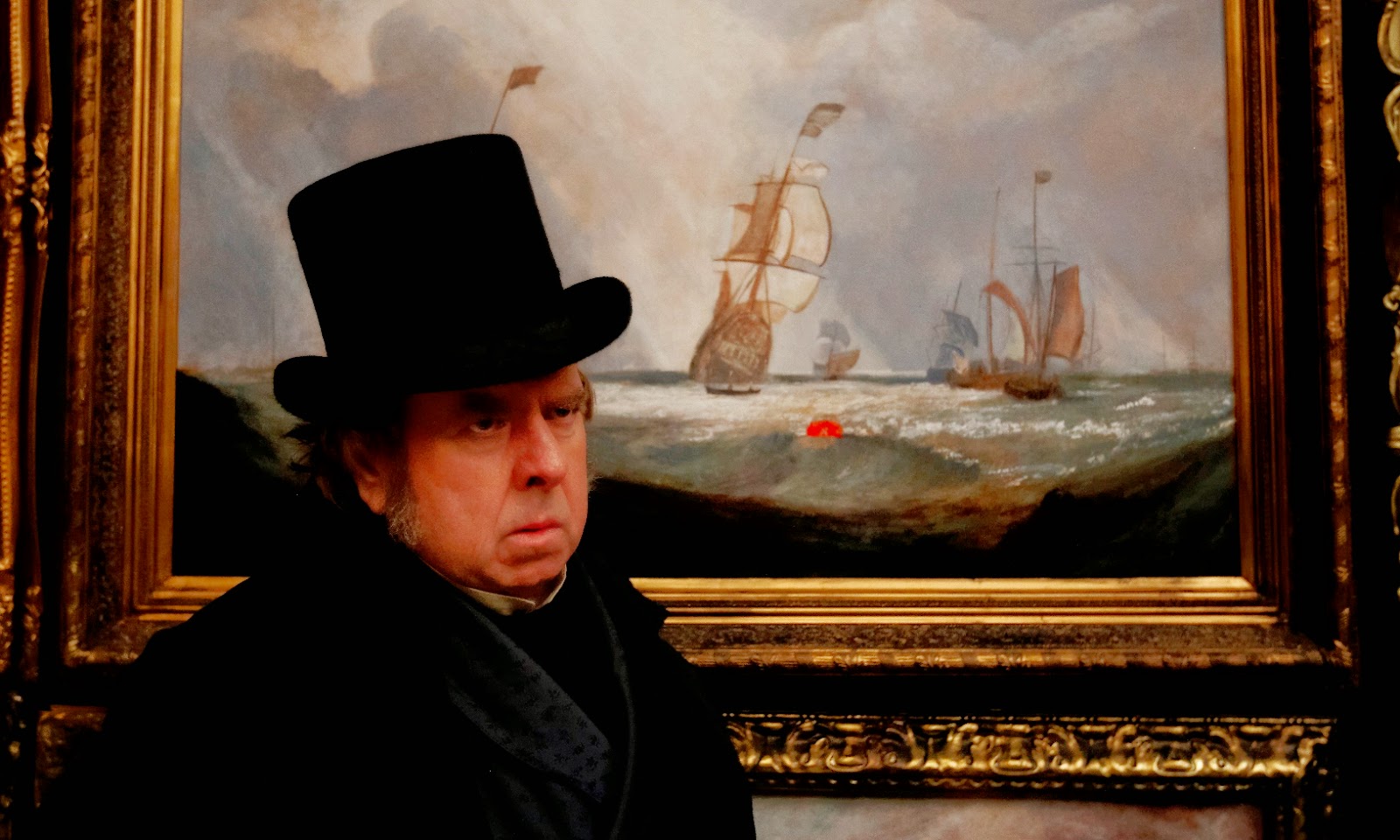 “The sun is God,” proclaims artist JMW Turner (Timothy Spall) with his dying breath in Mr. Turner. Mr. Turner, the biography of the great British painter from great British filmmaker Mike Leigh (Another Year), is an exquisitely unflattering portrait of a man who was capable of both poetic beauty and harsh cruelty. The man’s a mass of contradictions with his evocative ability to create capture landscapes and ships with awe-inspiring splendour whereas his view of humans is unbearably bleak. Leigh’s Mr. Turner epitomizes the world of warts-and-all biographies, and Leigh and Spall’s spectacularly unattractive portrait of this artist, his world, and his work is a stroke of greatness.


Mr. Turner simply presents moments in the life of Mr. Turner as he fastidiously throws himself into his work. Turner obsesses himself with capturing light in his paintings, so it’s no wonder that the great orb in the sky defines his transition from one world to the next. Mr. Turner displays some of the artist’s work so wonderfully that the texture and warmth of the sunlight that the artist infuses into his paintings is stirring enough to make even an atheist believe in the heavens. There’s nothing overtly spiritual about Turner’s works (or about the man himself), but Mr. Turner conveys the artist’s ability to create poetic images, elicit emotions, and conjure feelings of wonder and awe through his increasingly expressionistic renderings of the natural world.

Scenes of Turner’s obsessiveness show the full course of the artistic process. Turner stands in a field and etches on a piece of paper as he observes light and shadows with the setting of the sun. He dabbles with the correct colours of paints—expensive rarities from the local artisan—and furiously mottles his canvases in search of the perfect evocation of the natural shade and warmth of the sunlight. A huge gob of spit finds its way onto the canvas here and there—Mr. Turner certainly knows how to hork a loogie—and the mix of classical craft and barroom artistry uncannily realizes the many fascinating contradictions of this artistic titan.

Spall, a regular in Leigh’s films (as is pretty much everyone in Mr. Turner) gives a masterful performance as the grand painter. Spall’s Turner is a large presence, both in his swelling burliness and in his overall aura, as he plays the painter as a man of high calling, but one whose feet are firmly and humbly on the ground. Mr. Turner never once elevates its subject beyond the world of a mere mortal, for although Turner infects callousness to the people in his closest circles, he’s subtly considerate of his peers and weighted by his inability to connect with anything other than his art. The flawed and ordinary characterization of JWL Turner is most impressive in Spall’s creation of Turner as grotesquely human personality, like a Dickensian pub-dweller with a hidden talent. Spall’s Turner communicates largely through his own language—a series of grunts that sound like rough guttural oinking—and the dismissive unintelligibility of his bodily noises makes him resemble a painterly pig more than a divine artiste while conveying his pure disinterest in most of the other human characters in the film.

The moments of life that Leigh opts to show in Mr. Turner pepper JMW Turner’s world with peculiar characters that illuminate why Turner has such a reclusive personality and reveal how a man of such warm artistry can be such a cold character. His simple housemaid Hannah (impressively underplayed by Dorothy Atkinson) is his most devoted companion, caring for his work and running his home thoroughly without voicing any concern for her own poverty and sense of abandonment. Their odd relationship is defined largely by servitude and Turner’s sexual exploitation of Hannah—jarring, unexpected moments of copping a feel or worse—and by the fondness for the notice that goes unobserved by Turner in these few moments that he aggressively gives Hannah the attention she desires. The itchy psoriasis that increasingly colours Hannah as the years go on is one of the remarkable ways that Leigh imperceptibly weaves in elements of the social conditions that define Turner’s world, but the subtlety of Atkinson’s performance is especially fine in conveying Turner’s coldness as his most loyal confidant becomes increasingly swept away from his private life.

Casting aside those whom are most devoted to him is a trait of Mr. Turner, for Leigh invites Turner’s estranged wife, Sarah (Ruth Sheen), into the home with Turner’s two daughters and grandson for several visits. These abrupt visits show the pinnacle of Turner’s cruelty as Sarah can barely contain her contempt for her husband as he barely feigns interest in her or their daughters. Turner frequently denies his wife and children to peers and admirers (to frequently quizzical looks from Hannah), but the final encounter between Turner and Sarah brings the saddest moment of humanity into Turner’s home. It’s not that he detests people (okay, maybe Sarah); it’s that a relationship with paints and canvasses makes one far less vulnerable. Turner simply doesn’t know how to express himself with humans as well as he does with a paintbrush.

Turner finally finds solace in the warmth and simplicity of Mrs. Booth (Marion Bailey), the manager of a hotel by the sea where Turner frequently visits to observe the light on the water. Bailey is the image of charity and kindness as Mrs. Booth makes an effort to relate to Mr. Turner (who goes by the alias of “Mr. Mallard” in her presence, with “Mallard” being the M of JMW), but the growing affection between them also defines the growing detachment between Turner and Hannah. The final scenes following Turner’s death, much like Leigh’s other grand period piece Topsy-Turvy, invite the female characters of the ensemble to carry the final images of the film, and Mr. Turner offers a portrait of a man who could snuff out light just as easily as he could conjure it. The ending is poignant in its ambiguity and leaves the audience feeling an equal loss for Turner’s contribution to the art world.

The film itself is proof of Turner’s longevity as cinematographer Dick Pope (now and forever known as “Dick Poop” thanks to a gaffe by Academy President Cheryl Boone Isaacs on nomination day) creates each frame of Mr. Turner as a masterful nod to Turner’s work. The cinematography of Mr. Turner harnesses the light just as madly and beautifully as Turner does in his paintings. Any one of Pope’s landscape shots could hang on the wall of a gallery with their immaculate lensing of natural light. The excellent craftsmanship of the costumes by Jaqueline Durran (Anna Karenina) and the production design by Suzie Davis recreate Victorian London with just as rich an eye for detail.

Leigh strikingly extends the world of Mr. Turner to other currents in the globe that make the life of JMW just as relevant today as it was in the era of Queen Victoria. Turner, for one, positions himself well within the argument that art is meant for the good of the public when he refuses an intimidating offer of £100 000 for his entire collection. Turner believes that the art should be bequeathed, gratis, to the people of England and it should be displayed by all to see rather than holed up in a private collection or archive. Similarly, Turner confronts the advent of the camera with equal measures of inquisitiveness and despair, learning about the device as he gets his portrait done while wondering if this contraption that harnesses the light marks the end of the era for painters. It’s the same question of digital versus film, perhaps, that Leigh himself is confronting and accepting as currents change in the creation and consumption of art, but the world of Mr. Turner also shows that a master artist is simply irreplaceable regardless of the innovations that technology brings. Hmmph, indeed, Mr. Turner.

And don’t forget to take in some of Mr. Turner’s paintings at the National Gallery of Canada!

How many grunts would you give Mr. Turner?