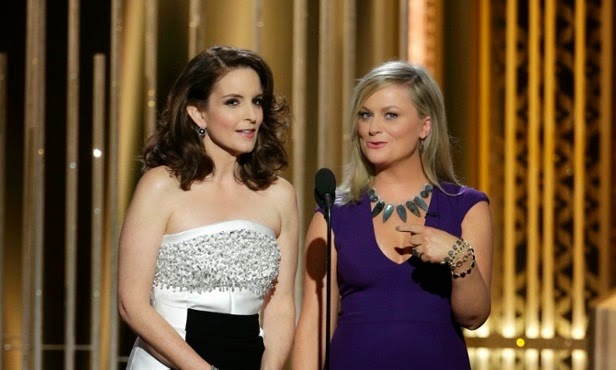 Well, Tina and Amy, it’s been swell. The third time’s the charm for the duo of Golden Globes hosts. Tina Fey and Amy Poehler got the show off to fun start by telling it like it is with a little sauce. A few roasts poked fun at the self-involvement of award season with a well-aimed shot at George Clooney gaining a lifetime achievement award over his wife Amal, who is a human rights lawyer. “Hollywood, Hollywood!” they chimed.


A quick game of Would-You-Rather offered a few good jokes about the films  and nominees themselves with the Richard Linklater/Alejandro Iñárritu match-up scoring the best by comparing the twelve-year production of Boyhood with the jazzy one-shot of Birdman and as the directors’ own distinctive style in the bedroom. The show got really edgy, though, when one the hosts introduced Into the Woods, scored a joke about Meryl Streep putting the cast members on a quest to earn her another Golden Globe, and then found a segue to roast Bill Cosby for his own alleged potions. Tina did her best Bill Cosby confession and then Amy one-upped it (I think there was a hoagie joke in there, too) and the timely dig scored the best laugh of the night.

Here’s the full opening number (with the Bill Cosby joke at 8:50.)

The intro was a highlight in an especially good night for the Golden Globes, which seemed to assert their relevancy very well in a season that’s becoming increasingly loud and cluttered. Most of the frontrunners prevailed, but a few upsets shook up the night. I didn’t do especially with predictions by guessing only nine out of fourteen winners, but the mix of foregone conclusions and unexpected coups made it a consistently good night.
Boyhood easily cements its frontrunner status with its trio of wins, especially since it isn’t conventional fodder for the Golden Globes, which usually reward mainstream star-driven productions over independent fare. Boyhood Best Supporting Actress winner Patricia Arquette (one of the heaviest favourite among the winners) and Best Director Richard Linklater conveyed the personal significance of the film by stressing their families while accepting the awards and, in turn, showing everyone why there’s a lot more to Boyhood than just a twelve year commitment. Birdman, on the other hand, seemed to have a Best Picture in the bag for the Comedy/Musical category when it scored a win for Best Screenplay—arguably one of the most competitive awards of the night—and a well-deserved Best Actor win for Michael Keaton (a foregone conclusion). It then lost in an upset to The Grand Budapest Hotel, which is mildly surprising since Birdman was the overall leader in the nominations tally and, more strangely, Birdman beat out Budapest in the screenplay category where Budapest is generally seeing the most favour throughout the season. The Globes win makes The Grand Budapest Hotel the dark horse of the race.

The biggest upset of the night, though, was in the feature animation category where How to Train Your Dragon 2 bested The Lego Movie. The animation race has largely been seen as a two-way race between The Lego Movie and the Japanese film The Tale of Princess Kaguya (which wasn’t eligible due to foreign language restrictions), so Dragon’s roar is a major boost for a film that’s been overlooked throughout much of the precursors. The better film won, in my opinion, so everything is awesome as far as the animation race is concerned.

The significance of the Golden Globes, which are the first major award show in the interval between the time that Oscar ballots are received and the nominations are announced, was most evident in the strong crop of speeches from the winners, most of whom made a fine impression for a favourable night at the Oscars. It was a surprisingly emotional night as many of the winners, especially for the television awards, highlighted the significance of their work in terms of onscreen representation and authenticity. Eddie Redmayne was genuinely gushing in his expected win for The Theory of Everything in the extremely competitive Best Actor – Drama category. He’s probably the one to beat come Oscar night. Birdman winner Michael Keaton, on the other hand, probably offered the most touching moment by choking up and calling his son his best friend, while the long-overdue Julianne Moore trumped wild card Jennifer Aniston and gave one of the classiest speeches of the night by highlighting collaborators who made the project possible while noting their personal connections to the project. Like the Boyhood team, Moore’s moment made her work and win feel relevant.

As for those who got a much-needed boost, Amy Adams might be one to slip in one’s final Oscar predictions for her work in Big Eyes. She’s great in the film but has been on the bubble since the movie itself is performing mildly at best, but a Globes win on the heels of an unexpected BAFTA nomination means she could take the fifth Best Actress slot at the Oscars that could go to Jennifer Aniston. Aniston’s loss for Cake is a bit of wrench in her campaign, but Adams also has the Weinstein Company behind them, and they’re the masters of the campaign game! Losses in the major categories for Selma, on the other hand, aren’t encouraging, especially since it was shut out at the BAFTAs and seemed like Boyhood’s biggest competition until this week. Common’s win in the Best Song category was one of the finer moments of the night, however, especially since he best articulated the significance of the film in terms of democracy and free speech—a point many tried to make in the wake of the Charlie Hebdo attack and Sunday’s marches.

Sunday’s Golden Globes, finally, were an overall good show because they brought a hefty abundance of Meryl Streep—that annual staple—into living rooms. Meryl didn’t win for Into the Woods, but Fey and Poehler gave a nod to Streep’s selfie moment with Ellen during last year’s Oscars by taking a jab at the controversy with North Korea and The Interview. The hosts introduced the newest North Korean member of the HFPA—Margaret Cho in disguise—and had Streep pose for a photo, which Benedict Cumberbatch promptly photobombed. This is why you always nominate Meryl Streep, people!

Best Actor - Drama:
★ Eddie Redmayne, The Theory of Everything

Best Original Score:
★ Johann Johannsson, The Theory of Everything

Best Animated Feature:
★  How to Train Your Dragon 2

What did you think of the Golden Globes?