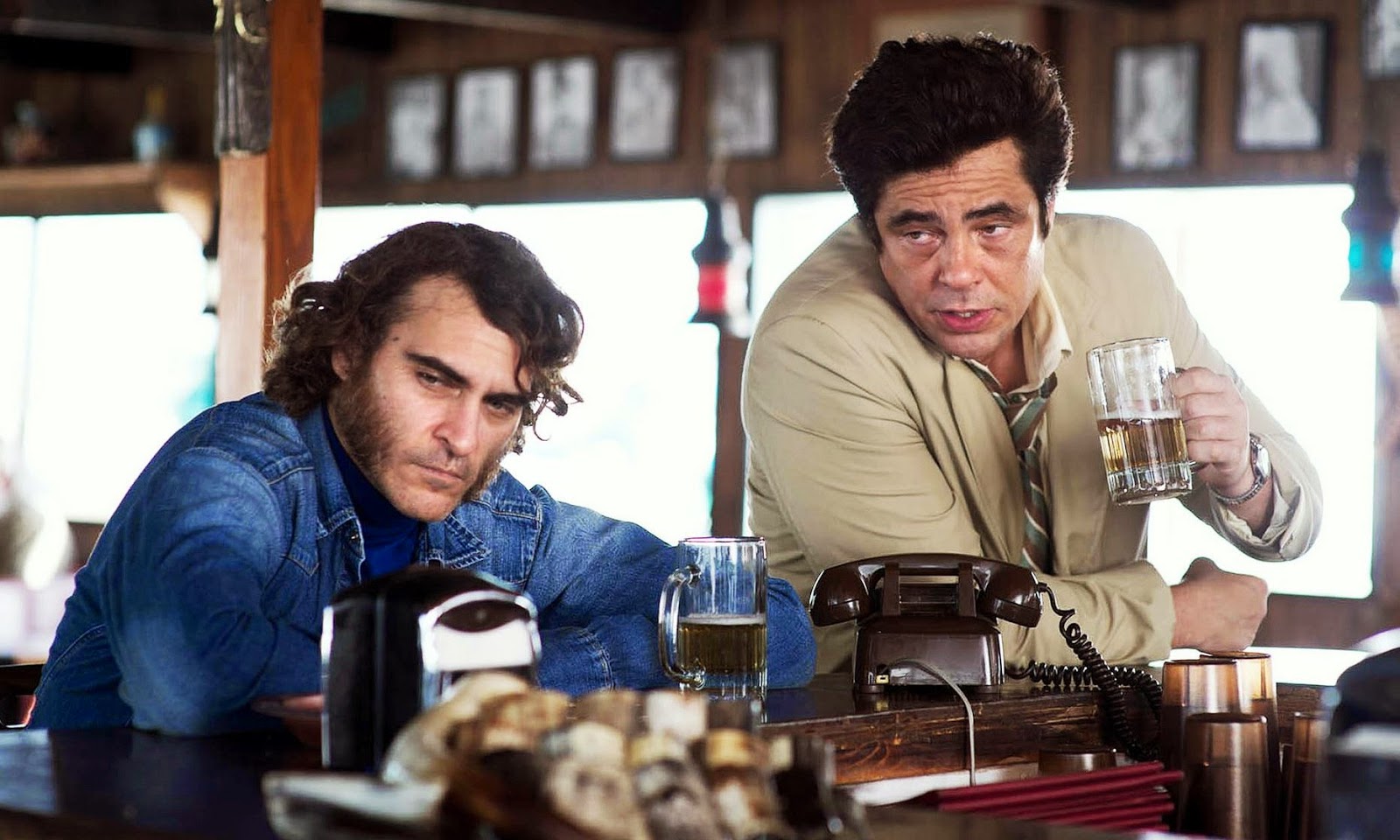 “You’re gonna wanna get good and fucked up before eating this shit,” says a waitress to Larry “Doc” Sportello (Joaquin Phoenix) and his comrade Sauncho (Benicio Del Toro) at a seaside diner where they order weird trendy dishes and prepare for the daily munchies. Virtually everyone in Inherent Vice, both the novel by Thomas Pynchon and the adaptation by Paul Thomas Anderson, flows through the story on about five kinds of drugs. They babble and ramble in paranoid, drugged-out streams of consciousness, and everything blurs together like those feverishly crazy intoxicated conversations that inevitably happen when a party makes its way to the kitchen at 2 am and everyone’s high on something, even if it’s just good vibes. Few films manage to leave one with a hangover, and the headache of trying to remember Inherent Vice is half the fun: Just what the heck actually happens?


Someone somewhere (I think) in Thomas Pynchon’s Inherent Vice says that if you can remember the 1960s, then you weren’t really there. Don’t ask for a page reference or a character name since Pynchon’s LA-noir is riotously convoluted. If nobody in Inherent Vice actually says the line, however, then perhaps that’s a point of the densely impenetrable world of the novel.

Inherent Vice remarkably marks the first Pynchon novel to make it to the big screen. It’s a testament to Anderson’s ambition, talent, eccentricity, and, to some extent, arrogance that he even attempts to adapt one of Pynchon’s many supposedly unfilmable novels. It’s even more impressive that he largely succeeds, since Pynchon’s books are so dense, convoluted, and intricate that every word seems indispensable for connecting the dots

Inherent Vice is hard to follow even if one has read the book, but the convolutedness of Pynchon’s prose finds a good counterpart in Anderson’s over-the-top approach, which runs at a madcap pace for two-and-a-half hours of dialogue. The mystery begins (sort of) when Doc receives an unexpected visit from his ex-girlfriend Shasta Fey (Katherine Waterston, in what’s surely a breakout performance) after a long hiatus. Shasta’s a little paranoid, but even a heavy toker like Doc can tell her fear doesn’t come from drugs. Shasta asks for help and explains a wild scenario with her boyfriend and a property developed named Mickey Wolfmann (Eric Roberts) with whom she’s involved. Then she, the boyfriend, and Mickey all disappear and their vanishing act leads Doc into network of drug traffickers, hippies, crooked cops, and masseuses.

On top of the wackiness comes a layer of voiceover narration from Doc’s friend Sortilège (Joanna Newsome), who recounts the story of Doc’s odyssey into the underbelly of LA. Inherent Vice thus becomes doubly convoluted since Sortilège is a wholly irrelevant and unreliable narrator. Like everyone else in Inherent Vice, she’s on some kind of magical drugs, and much of her story is probably a patchwork of pass-the-reefer broken telephone.

Everything kind-of-sort-of gets resolved (but it actually doesn’t) in Pynchon fashion, and Anderson has a lot of fun playing up the hazy ambiguity and paranoia that puffs up as Doc wracks his brain for love. Doc’s cases crisscross as the circuitry of Pynchon’s world entwines all of Doc’s cases in some ridiculously incestuous web. One thing leads to another and each lead in Inherent Vice is either a springboard or a MacGuffin.

There’s too much coincidence and chance going on, a gumshoe like Doc knows, so all the conveniences and convolutions of Inherent Vice are either some pre-ordained miracle or cues for some major conspiracy of which Doc is the target. Inherent Vice madly uses the groovy openness of the 1960s as an underlying witness to each of Doc’s cases. Doc’s current squeeze, a DA with a trendy ’do named Penny (Reese Witherspoon), is equally prone to paranoia. Each of their encounters brings cautious over-the-should glances as if she’s worried that she’ll be outed for not being one of the squares.

The film takes place just at the beginning of the 1970s, so there’s a turn of the century vibe as the gap between the liberals and the squares widens and some people say enough to good vibes while others are so out to lunch with freewheeling experiments. A coke-snorting lawyer played by Martin Short and a new-age snitch played by Owen Wilson are some of the many colourful characters that place Doc in city that doesn’t quite know how to handle the changes in liberty and responsibility. It’s The Big Sleep for the “Mad Men” age with Doc as the liberal’s Philip Marlow/Don Draper and with reefers as Lucky Strikes. Call it The Big Smoke

Phoenix gives one of his better performances since Inherent Vice caters to the self-consciousness and inescapable weirdness of his style. His star persona suits the stoner-hippie-and-sandals vibe of the eccentric gumshoe. He leads another Anderson-esque ensemble full of players who embrace the mania of the direction. (Inherent Vice, like The Master, feels more like the work of a unique voice than of an offshoot of a renegade Robert Altman.) Brolin easily steals the show, though, as the goofy Bigfoot, although everyone in Inherent Vice adds a shade to the hallucinogenic funk.

One could reproduced the phone book citing everyone who makes the drugged-out insanity of Inherent Vice worth the infuriating madness—shout out to Japonica!—and the film is almost always on the verge of collapsing upon its own density and strangeness. Anderson’s Inherent Vice, however, is like a Jenga game of adaptation. Pull one block from the bottom and put it on the top, and the film wobbles with zanily gutsy architecture and, despite itself, it actually works. Now can we please get The Crying of Lot 49?