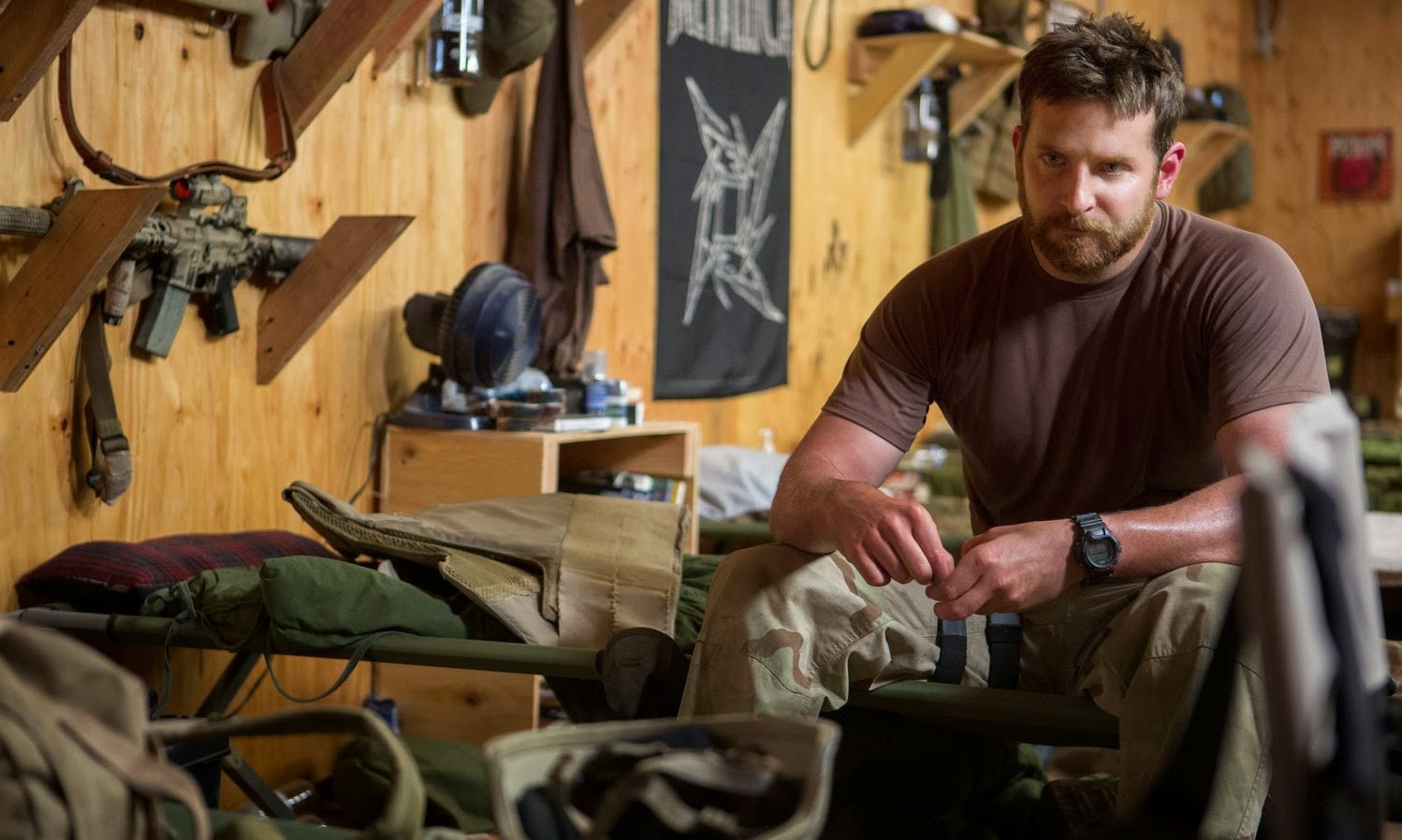 Look no further than American Sniper for an example of a competently crafted film that shoots itself in the foot by failing to question its own politics. American Sniper, hereafter referred to as ’MURRICAN Sniper, is a disappointingly blunt and narrow project from director Clint Eastwood. Sniper carries all the signature prowess of an Eastwood film—it’s faultless from a technical point of view—but it’s ironically shortsighted for a film about a sniper. Subject Chris Kyle, played by a beefed-up Bradley Cooper, who also receives a producing credit, is reportedly the most lethal sniper in ’Murrica’s history with an estimated 160-odd kills to his name. Cooper is strong and Eastwood’s direction is precise, but Sniper backfires because it valorizes the ideology of the American War Machine in which masculinity defines itself by guns and violence while patriotism becomes a blanket excuse for death and destruction. There’s no denying that Kyle’s life features acts of heroism, but is American Sniper really the film that America needs right now? In short, no it isn’t.


Eastwood makes something of a rebound with Sniper after hitting the lowest point of his career with Jersey Boys (one of the ten worst films of 2014) and it probably isn’t any coincidence that the gung-ho Sniper raced to completion like a bull. Any notions that making a musical turned Clint into a pansy, which are surely minimal since Jersey Boys is the squarest musical ever made, see themselves snuffed out with the hotheadedness of Sniper. Eastwood is one of the best gunslingers that Hollywood has ever seen both in front of the camera and behind it, and Sniper carries the signature of a marksman since it’s both taut and tense. It also carries the stamp of a marksman, however, with how palpably it feels like a product of cultural mindset that thrives on guns and violence.

There’s certainly a pocket of America to which American Sniper caters. It is a right-wing film made for conservative viewers, and it competently succeeds in delivering what it sounds out to offer: a patriotic eulogy for an American soldier. The target audience is bound to enjoy it. On the other hand, though, anyone who doesn’t fall into this gun-loving ideology will undoubtedly be disturbed by the bullheadedness and perceptible ignorance of the film. American Sniper will please its targets, but it’s likely to leave those on the other side of the right feeling that movies like American Sniper are why people hate America.

American Sniper shows guns as a deeply ingrained part of the identity of the American male when it flashes back to the childhood of Chris Kyle. He’s hunting deer with his father and the scene in which he bags his first deer plays like a scene of a father teaching his son how to ride a bike or throw a baseball. “Never put your rifle in the dirt,” father Kyle says to Chris when the boy rushes over to his deer: guns are something to be preserved and cherished.

This flashback comes at a gripping moment in which the adult Kyle is on tour in Iraq and he has a mother and her young son in the crosshairs. “What kind of man shoots a mother and child?” American Sniper infers as it trains its eye on the man behind the scope who debates pulling the trigger. It takes a real man, a born-and-bred American, the film says as it charts Kyle’s rise as a Bible-totin’, gun-slinging rodeo cowboy who sweet talks the ladies and punches any dude who threatens his seat at the table. There’s no denying, though, that Sniper and Cooper adroitly present Kyle as an upright and morally grounded character: he’s a good and honourable man, and he knows the ethical complexities of being a sniper with how unnervingly he pauses each time a child enters the crosshairs.

Cooper, moreover, gives an impressive transformation as the all-American sharpshooter. He’s like a renegade bull, there’s so much testosterone on the screen, and he plays each kill coolly and indifferently as if it’s simply his duty to do so. He’s part of the war machine, an extension of his gun, and he fully exhibits the sense of honour and duty that many men in his position likely feel. Cooper really elevates the film, however, in Sniper’s final act in which the weight of the war comes down on Kyle and he experiences symptoms of post-traumatic stress disorder. He’s distracted and distant, on edge from the violence he’s seen, but also itching to get back. Sniper shows the complexity of the mind of the American soldier that the burden it places on families, especially the grief and sense of abandonment voiced by his wife, Taya (Sienna Miller), and the their two children (alternatively played by the most ridiculously fake dolls a Hollywood film has seen in years). Sniper, though, presents this rift between the family as a sacrifice and as a call to duty. Soldiers do indeed give up a lot to fight for their country.

The problem with the film isn’t Kyle himself, but Sniper’s presentation of his role in the war in which he fights. The film never questions if all this violence, bloodshed and death, plus the strain on one’s family back home, has any justification if the war itself is all for nothing. The film shows the iconic image of the World Trade Centre collapsing on 9/11 before Kyle ships off to Iraq and the powerful image, which comes just before the image of the couple taking their first dance at their wedding where Kyle and his soldiers receive news of their deployment, strikes up an image of patriotism and protecting the nation from harm.

But therein lies the problem: Iraq wasn’t about 9/11, was it?

American Sniper builds endlessly heroic sequences as Kyle defends his fellow soldiers, but the soldier himself never questions his belief in America’s role in the Middle East. Fleeting references to the pointlessness of the war are scant—his shell-shocked brother says, “Fuck this place” before leaving to go back home and a brother-in-arms writes of the senselessness of the war before he dies in combat—but each of the questions arises more as a sign of weakness. American Sniper presents Kyle’s unwavering strength as a facet of his valiant heroism, so this well-intentioned elevation of the character rings phony when time hasn’t been kind to America’s mission in Iraq. It perpetuates a myth that’s been debunked as opinions against Iraq turn and, more importantly, turn over some perceived evidence used to fuel the fight. Sniper feels out of touch with reality in a cinemascape that seen the likes of films that interrogate the futility of war, such as Kathryn Bigelow’s The Hurt Locker, or when the larger cultural consensus agrees that going to Iraq was a false war. American Sniper tries to validate the war under a veil of patriotism and it just rings false.

Iraq becomes a battlefield in American Sniper as if it’s the setting for a thrilling POV-video game. The only tangible motivation behind all these kills is a growing rivalry between Kyle and an Iraqi sniper named Mustafa (Sammy Sheik). Mustafa never says a word in a film—he simply sneers silently like an agent of evil—and his characterization is the film’s grossest slip into us/them othering as it pits Kyle and the soldiers against stock-type adversaries. The rivalry between Kyle and Mustafa actually belittles Kyle’s valour, for it makes his return trips to Iraq to settle the score and squash out this Olympic marksman feel like nothing more than a good old-fashioned pissing match between two bucks at the rodeo. The film adds a revenge twist to validate the climax of Kyle’s showdown with Mustafa, but it’s undercut with the overriding personal victory that follows the bullet along its lame CGI sail from Kyle’s barrel and into Mustafa’s head.

American Sniper, cheesy bullet aside, has some of the most visceral kills in recent war films, but, again, that's problematic of the film's reluctance to deconstruct an American cultural mindset that thrives on gun violence.  Despite the lack of analysis or depth in the screenplay by Jason Hall (Paranoia), Eastwood delivers a few bravura action sequences that are genuinely intense feats of cinema. The climactic sandstorm, for one, is a dizzying realization of the hell of war, while the most gripping sequence sees Taya on the phone with Kyle when his team faces an ambush, and she’s left alone with the traumatic suspense her husband might be dead. These two moments, plus Cooper’s strong performance, illustrate how American Sniper undoubtedly has moments of greatness and prove that there’s a genuine craft and dramatic heft to the film. It’s just a shame that Sniper doesn’t have the scope to match its craft. But it's an improvement over Jersey Boys, so I'll give you that, Clint!