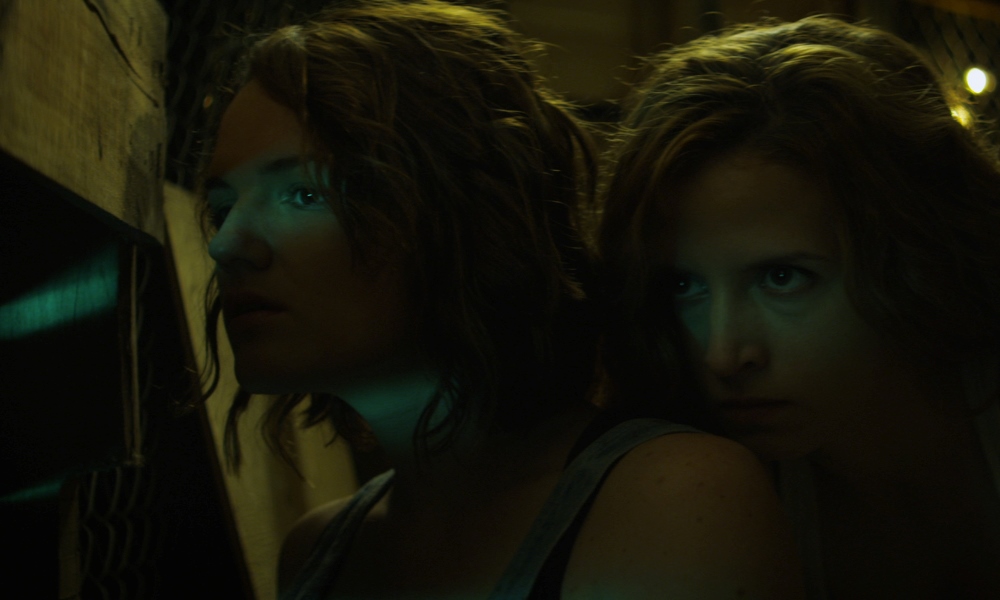 Girls go wild in The Scarehouse! This horror-comedy from writer/director/editor gives torture porn a good old catfight as jilted pledges Corey (Sarah Booth, who also gets a story credit) and Elaina (Kimberley-Sue Murray) devise an elaborate scheme of Jigsaw-justice in a Halloween spookhouse moonlighting as a party to get even with their former sorority sisters. Don’t let the synopsis or opening number, which sees some sexy co-eds throw pillows and bash each other with sex toys, fool you: The Scarehouse is fully aware of the gender politics at its core and it has lots of fun taking them to the extreme. The Scarehouse is sadistic satire and it’s a bloody hoot.

Two committed performances from Booth and Murray gives the film a playfully creepy vibe as the two girls refuse to accept the consequences of their actions and give twisted turns as the young women driven by revenge. Both actresses channel cartoonish villainesses during several moments of the film, but Murray adds an unexpected moral centre to Elaina, which contrasts with Booth’s deadpan wickedness and gives The Scarehouse an extra edge as the two killers consistently feel like their own foils. They’re a regular freak show amidst the spectacular spookhouse—an impress feat of production design for the film’s modest $200 000 budget—that makes for some attractive visuals and a grand carnival setting for the dark humour of the Looney Tunes violence.

The Scarehouse seems like the film that Ottawa’s own Girlhouse struggled to be when it debuted last fall, but the coed bloodbath of Scarehouse doesn’t have the same awkwardly sexist vibe that its counterpart has. It helps that the aggressors of Scarehouse are both female—and Corey and Elaina take the adage of “hell hath no fury like a woman scorned” to the extreme—and the film turns its disgusting girl-on-girl action as far as it can reasonably go.

The difference between the two films might best be exemplified in two telling deaths: in Girlhouse, the male killer asphyxiates a female victim with a dildo (how psychoanalytic of him), while the killers of Scarehouse make a girl choke to death on her on breast implant. (Thankfully, for both the poor girl and for the audience, the victim isn’t a double D.) If Girlhouse struggles, it’s because the drama is framed from a male’s viewpoint (it’s about a web program in which coeds broadcast their lives/sexual escapes 24/7) and it frequently uses cringe-inducing sexual violence to tease and provoke the audience. Scarehouse, on the other hand, often has the killers wield their weapons with a sexual charge, but Booth puts a perceptible spin on rape culture as the morale behind the film, and the ugliness of the girls’ revenge exposes itself in turn.

Scarehouse balance the sinister and the silly with a double-edged narrative that crosscuts between the torture porn of the present and the past transgressions for which the girls are getting revenge. The flashback scenes of Scarehouse at first make the film seem like it’s going to be a groaner, for the aforementioned pillow/vibrator fight plays out from the viewfinder of a handheld camera. It’s a piece of found footage. Instead of overwhelming the film with clichés, however, the found footage works as an exhibit of evidence that slowly and teasingly reveals the reasons for which Corey and Elaina are getting even. They more they use the past to justify their actions in the present, the more the film reveals them far from blameless. They did an awful thing then and they’re doing an awful thing now, and a gross explosion of the blame game leads everyone to a gruesome fate. Elements of bullying and slut-shaming sensationalize the deeds in both the scarehouse and the sorority house, and The Scarehouse builds a complicated web of characters in which everybody is complicit in a culture that normalizes sexual violence and measures consequences only by the number of “likes.”

It helps that nobody in The Scarehouse feels particularly innocent, although the film frequently feels as if it teeters on the edge of blame, but the fact that all of the characters are pretty repugnant makes it easier to appreciate the edge to The Scarecrow’s satire. The film’s at its funniest when the violence is at its most ludicrously stereotypical—like an acid-drenched pillow fight or a case of strangulation by corset—that The Scarehouse humorously mocks the extremism of things like Greek Life and selfie culture. The shallower the victim, the more gruesome her death. Some of it’s downright nasty—both the violence and the hazing. These girls are some twisted, twisted pranksters with or without the knives, guns, and acid, and The Scarehouse is twisted, twisted fun.

The Scarehouse is now available on home video.