'What Happens When a Man Stands Up and Says Enough is Enough?' 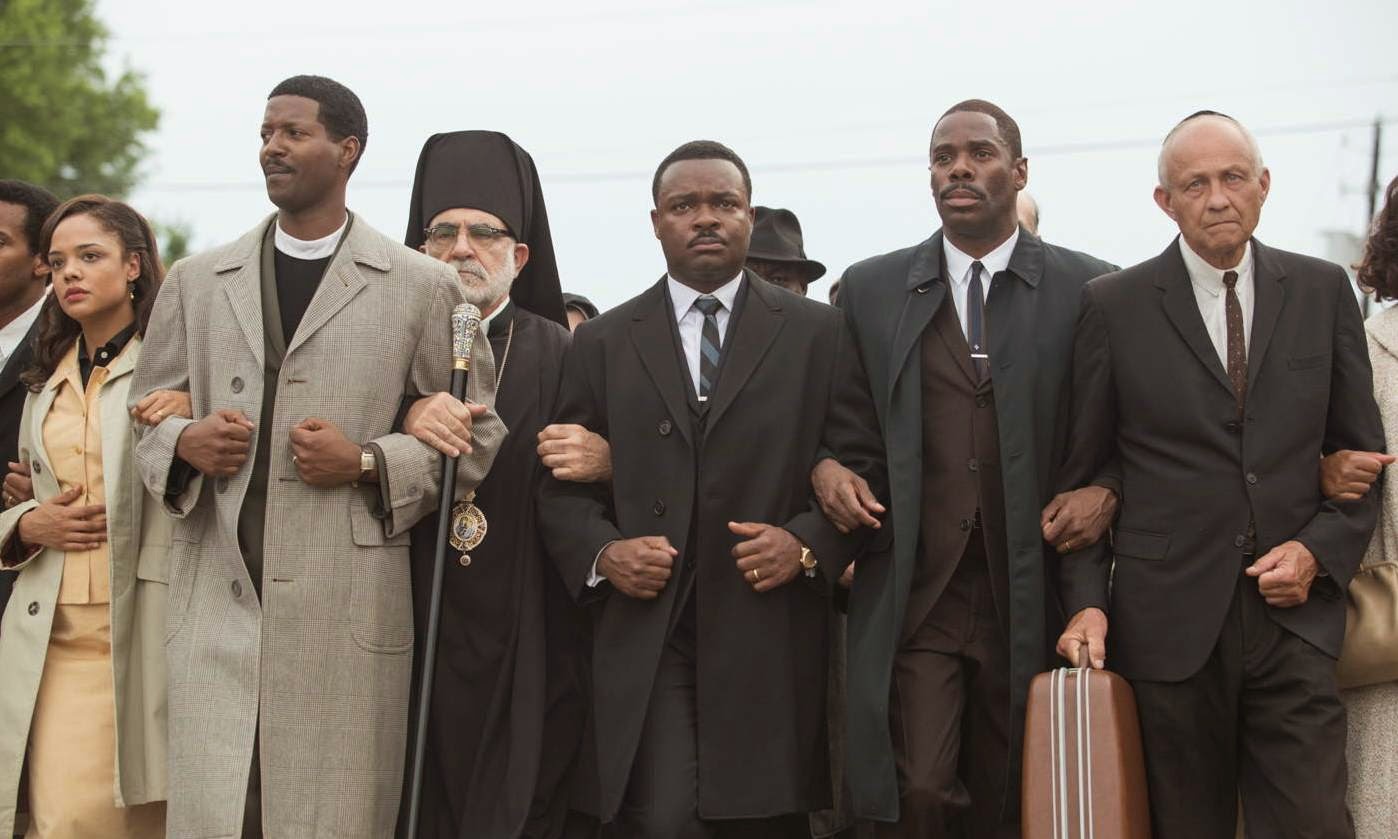 “What happens when a man stands up and says enough is enough?” asks Dr. Martin Luther King, Jr. (David Oyelowo, A Most Violent Year) as he leads the landmark voting rights march in Selma, a powerful dramatization of the Civil Rights trek from Selma to Montgomery, Alabama in 1965. What happens, though, when a woman says enough is enough? Selma itself rings with a palpable relevancy as it brings filmmaker Ava DuVernay into the mainstream from the corners of American independent cinema in which she’s had notable success with small films such as Middle of Nowhere. Selma offers a resounding rallying cry of “enough is enough” from the onscreen Dr. King and from the director Miss DuVernay. Conversations are growing and growing about the necessity for more representation from female and minority voices behind the camera in Hollywood, and Selma couldn’t provide a better example for the necessity of diversity on both sides of the frame. DuVernay dramatizes this slice-of-history with a forcefully authentic voice.

Sure, Selma might be an imperfect film, but any problems with the pacing or with the thematic markers of the script are vastly eclipsed by the emotional and intellectual scope of DuVernay’s direction. Selma dramatizes a brief yet pivotal moment in history and DuVernay ingeniously realizes the Selma march as a turning point in the Civil Rights movement by drawing out the universality and urgency of the marchers’ plight to convey its tangible relevance to contemporary audiences. The recent riots in Ferguson and even this week’s attack in Paris give the film a searing emotional heft that puts one directly in the thick of history as it unfolds. Selma is a period piece, but it looks and feels like a window to today. As the film resonates with a seamless fusion of past and present, it gives the viewer the sense of going from being a passive observer to an active participant.

It’s most impressive that DuVernay pulls off such an involving and resounding film. Selma succeeds by giving Dr. King a notable lead role, but the film arguably favours the greater movement of which he was a leader. Selma frequently cuts back and forth between scenes of the intimate life of King and his wife Coretta (Away We Go’s Carmen Ejogo, very effective in her few scenes) and the film opens with a direct address from King as he looks into the camera (doubling as a mirror) while preparing to accept the Nobel Peace Prize. Coretta ties his ascot while he laments his guilt over wearing such fine clothes while folks at home are barely scraping by, and Selma lovingly presents these two figures within their place in history.

The film then abruptly cuts to a group of young girls at a church that is rocked by an explosion. The peacefulness of the Kings’ preamble amplifies the jarring violence that ensues. Selma ensures the audience is shaken within five minutes as innocent lives are lost. The firm contrast of Dr. King’s honour from the Noble committee and the violence against African Americans more than capably says enough is enough.

Selma then encapsulates the activists organizing the march and participating in demonstrations in Selma as scenes with Dr. King punctuate the story of the march with debates in the White House with President Lyndon Johnson (Tom Wilkinson) and at home with Coretta. Johnson wants Dr. King to call off the march and wait a few years to introduce legislation to amend voting rights (the cause for which the activists in Selma are marching) while Coretta worries that the escalating threats against her husband and her family are worth the trade. Selma underlines the gravity of each dilemma using frequent intertitles highlighting FBI surveillance against Dr. King: he’s perceived as a threat both to the system and to the status quo.

It’s mostly in the bracingly confrontational scenes between King and Johnson that Selma feels like a period piece that Hollywood hasn’t seen before. The film paints Johnson not as an adversary, but as a man reluctant to exert his power to change the status quo. There’s not so much an anger to Selma as there is a palpable fatigue for keeping things the way they are, and every frame of these confrontations feels fair as a consequence of this perspective: people do tire of inertia. The restlessness over a comfortable norm that benefits few moves like a current in Selma and incites each member of the ensemble, black or white, to tip the audience in the favour of those hungry for change.

Central to the film is Oyelowo’s commanding performance as Martin Luther King, Jr. Oyelowo delivers many of King’s speeches (usually alterations of) with magnetic force, embodying the leader’s passion and charisma, and eliciting the stirring inspiration of King’s influence as he rouses the audience with his lively gestures and dramatic oration. It’s a revelatory and star-making performance, yet Oyelowo never overwhelms the film despite how grandly DuVernay lets him shine. Selma truly plays an ensemble film and each actor from Ejogo to Common to Wendell Pierce to Lorraine Toussaint and, finally, to Oprah Winfrey effectively embodies both the personal and collective struggles of the marchers in Selma.

The centerpiece of the film is a volatile confrontation of the marchers by the state trooper that comes when the march first reaches the Edmund Pettus Bridge. This expertly choreographed sequence is a hellish chaos of brutal violence as the peaceful protestors are met with force, but DuVernay and cinematographer Bradford Young capture the explosive encounter with objective frankness. Selma neither sensationalizes nor hides the violence and instead conveys it with a gritty realism. The involving perspective with which the film presents the violence on the bridge lets one play witness to the shocking images that helped wake up more corners of America’s consciousness during this episode of history.

DuVernay’s greatest feat, finally, is finding power in the image of a united front. This essence frequently arises through the harmony of the actors, but it also comes in the expansively intimate scope of the film that deftly situates the Selma march within the larger national consciousness. Each shot of the marchers traversing the Edmund Pettus Bridge is grander than the next, and each sequence feels like a step towards progress as the shots become wider and the crowd becomes larger. The importance of Selma becomes more perceptible with each minute and the lessons of this chapter from history become more universal as Selma’s scope expands as Dr. King and company march on to Selma’s final frame.