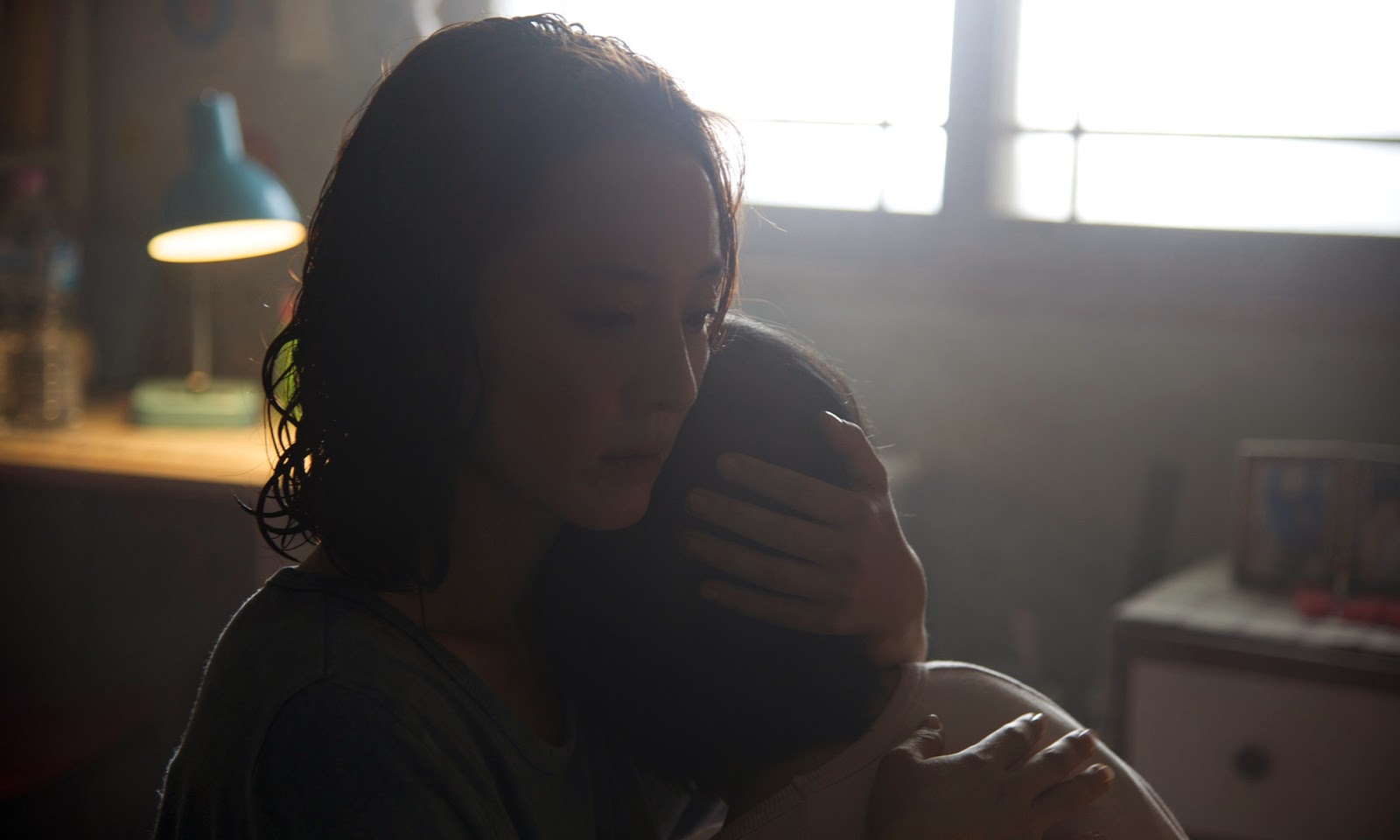 Three women. No names. Only roles and places.

One is a mother (Hae-yeon Kil). Another is her daughter (Ji-hye Ahn). This daughter is expecting a child, but she’s not the mother to be. That woman (Da-kyhung Yoon) is an affluent wife from Seoul who, along with her husband (Kynung-ik Kim), plans to buy and adopt said baby as soon as it is born. The woman stays with the mother and daughter to save face from her own family and to keep the impropriety of the transaction under wraps. Tradition and honour bind many of the women and men who travel through the destitute farm in Albert Shin’s powerful drama In Her Place, and this film provides a powerful snapshot into the economies of gender running around the globe. The film calls to mind Canadian films like Incendies and War Witch by transporting Canadian content to different corners of the world (In Her Place is shot and set in South Korea), and the local, yet global flavour of the film is doubly resonant as it puts the three woman into a larger perspective of international human rights.

The smart screenplay by Shin and Pearl Ball-Harding dexterously offers perspectives from the three women in a deceptively simple two-act structure. The first half of the film sees the situation from the perspective of the woman from Seoul (let’s just call her ‘the woman’ for simplicity’s sake) as she resides with the family, showers gifts on the expectant-mother (let’s just call her ‘the girl’), looks after her health, and keeps company with the girl’s mother (whom we’ll just call ‘the mother’). Things seem fine as far as the upcoming baby goes, although the woman worries that the girl isn’t eating enough and might be putting the baby at risk with her withdrawn spirit. The woman’s concern feels understandable: as a woman awaiting the birth of the child that has long eluded her, this baby is the last and probably most extreme chance she has of being a mother. On the other hand, she’s also looking out for her side of a deal: she’s paying the girl and the mother for this baby, so the product should be delivered with the utmost care.

Shin keeps the drama of the first section of the film hesitant and restrained as the three women awkwardly dance about their relationship and exchange pleasantries while they get through the day-by-day. Things become increasingly uncomfortable in the second half, however, when In Her Place deftly shifts its point of view with a single cut. Seeing the situation from the eyes of the girl, In Her Place conveys just how inescapably awful and heartbreaking this situation is for her. She has no rights over her own body, no agency, and no voice both literally and figuratively. As the baby’s father returns to the picture and the girl flirts with the idea of motherhood, though, In Her Place reveals the unfathomably self-destructive actions she takes as punishment for sacrificing her child. Where there is hope in one half of In Her Place, there is hell in the other.

In Her Place finds its quiet, devastating power in the trio of exceptional performances by its three actors. As the woman eagerly anticipating motherhood, Da-kyhung Yoon is a dynamic force that puts the viewer right in the crosshairs of this complicated dilemma. She has a strong maternal sense: she’s caring, compassionate, and observational, and the actress’s nuanced turn doesn’t let the viewer easily hook the blame on her for the obvious exploitation of the girl carrying her baby. The first act of the film even lets the woman’s aid of the family seem like charity and altruism: she’s a good, likable woman, who simply waits to adopt her baby and give financial aid to a family and honour to a mother feels shame for this birth outside wedlock.

The second act, however, turns the film on its head as Ji-hye Ahn assumes control of the film with her remarkably subdued performance as the girl. She barely utters a word throughout the film—she’s barely even privileged to speak—yet she conveys a wealth of pain and despair through her subtly tragic realization of the girl’s depression. Her escalating psychological breakdown and complete loss of her sense of self gives the film remarkable power and rightly shakes the viewer with the girl’s sense of loss. The violation over her rights and her body trumps every other emotion brought by the film.

And then there’s Hae-yeon Kil as the mother, who might give the most heartrending performance of all when In Her Place looks at the tragedy through her eyes during the film’s epilogue. The mother’s heartbreak creates another victim in this tale of poverty, grief, and hardship. Conveying the cruelty and irony of the situation, Hae-yeon lets the mother assume the greatest burden of guilt while also demanding the most sympathy from the audience. By the film’s end, one wants to know more about the hardship that brought this woman to the point of putting her daughter and grandchild up for sale. Her tired, dejected performance places the drama of In Her Place within a greater cycle of poverty and privilege. The film is intimate with the raw power of the three actresses, and the resonance of the tale extends far beyond the three women and invites audiences to seek out the larger human rights story underlying the girl’s despair.

In Her Place is currently nominated for seven awards at this year’s Canadian Screen Awards, including Best Film and kudos for all of the actresses. It’s exactly the kind of film that audiences need to get behind right now, as it smart and relevant, it offers diversity both in front of the camera and behind it, and, most importantly, it introduces a filmmaker of substantial talent. In Her Place marks Shin as one of the most extraordinary new filmmakers on the Canadian film scene today. The film is technically assured and Shin’s complex and understated hand with the actors is very impressive. This remarkable film—a sleeper hit at the Toronto International Film Festival last fall—deserves every bit of acclaim and attention it can get. The power and scope of In Her Place is bound to floor you.

In Her Place opens in Toronto at The Carlton on Friday, Feb. 13.